(One of the Greatest Golfers of All Time)

Advanced Search
Jack Nicklaus is one of the greatest and most successful golf players of all time. He is the only player to complete his career ‘Grand Slam’ on both regular and senior tours. Apart from having a total of 118 professional tournament victories to his credit, he also has a record 18 major championship titles, which include six ‘Masters,’ five ‘PGA Championships,’ four ‘U.S. Opens’ and three ‘British Opens.’ One of the only five golfers in the world to have won all four major professional golf tournaments, Nicklaus is known for employing his mental and psychological resources while playing the game. A talented golf course designer, he has received numerous awards for his designs. He also runs one of the largest golf design practices in the world. He is also a proficient writer and has authored many books, including a popular publication titled ‘Golf My Way,’ a book with instructions on golf. He has also penned an autobiography titled ‘My Story.’ Apart from his other skill sets, he is also a skillful businessman, owns a chain of private business, and is the founder and host of ‘The Memorial Tournament.’ Jordan Spieth
DID WE MISS SOMEONE?
CLICK HERE AND TELL US
WE'LL MAKE SURE
THEY'RE HERE A.S.A.P
Quick Facts

American People
American Men
Ohio State University
Male Golfers
American Golfers
Childhood & Early Life
Jack William Nicklaus was born on January 21, 1940, in Columbus, Ohio, USA, to Charles Nicklaus, a pharmacist, and Helen Nicklaus.
He grew up in the well-to-do suburb of Upper Arlington and attended ‘Upper Arlington High School.’ He played basketball, baseball, and tennis throughout high school.
A child prodigy, he started playing golf at ten and by the time he was 12, he had won the ‘Ohio Junior State Championship.’ At 14, he had won the ‘Tri-State High School Championship.’
In 1961, he graduated from the ‘Ohio State University’ with a major in Pre-pharmacy, and he planned to join his father’s pharmaceutical business after graduation.
While studying at the ‘Ohio State University,’ he actively participated in sports and won the ‘U.S Amateur’ title twice and also won the ‘NCAA basketball championship.’
He studied insurance for a brief period and sold insurance policies while attending college. 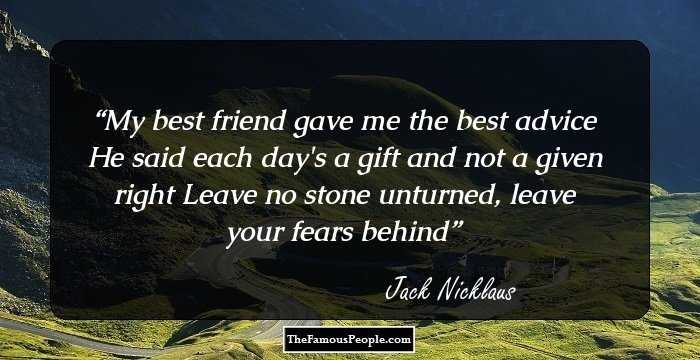 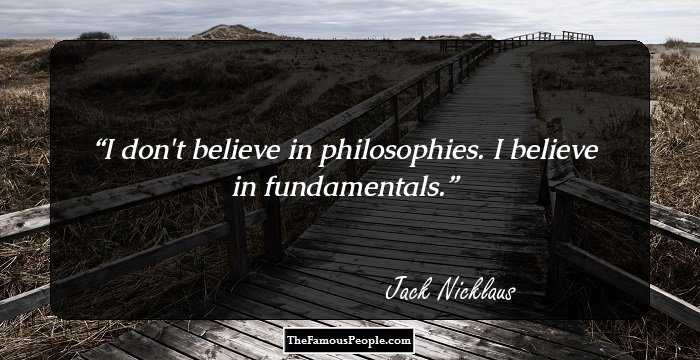 Quotes: Believe, I
Awards & Achievements
From 1959 to 1961, he was given the title ‘world’s top amateur golfer’ by ‘Golf Digest,’ a monthly golf magazine.
Continue Reading Below
In 1962, he was featured on the cover of ‘TIME’ magazine after he won the ‘U.S Open Tournament.’
In 1962, he was honored with the ‘PGA Tour Rookie of the Year’ award.
In 1974, he was inducted into the ‘World Golf Hall of Fame.’
In 2005, he was awarded the ‘Presidential Medal of Freedom’ by President George W. Bush.
In 2008, he was elected as the Global Ambassador of the ‘International Golf Federation.’
Personal Life & Legacy
On July 1960, he married his long-time girlfriend Barbara Bash, and the couple has five children.
In early 1963, he injured his hip while playing golf.
He was featured on a special commemorative issue of a five-pound note, issued by the ‘Royal Bank of Scotland.’ This made him the first living person to appear on the bank note, besides the Royal Family.
In 2002, the ‘Ohio State University’ dedicated 24,000 square foot to ‘Jack Nicklaus Museum’ in his honor. The museum offers a comprehensive view of his life and achievements.
Trivia
At the age of 13, Jack Nicklaus had a mild poliovirus attack, but he overcame it.

Quotes By Jack Nicklaus | Quote Of The Day | Top 100 Quotes

See the events in life of Jack Nicklaus in Chronological Order