(One of the Greatest Golfers of All Time)

The name Tiger Woods is synonymous with golf, and why would it not be? He is after all, the current No.1 golfer in the whole world and one of the most successful golfers of all time. He also has the distinction of having earned the most in PGA Tour history. A child prodigy, he was introduced to golf when he was just a toddler of two! He won the Junior World Golf Championships six times and became the youngest ever U.S. Junior Amateur champion when he was 15 years old. He turned professional when he was 21 and won his first major tournament the very next year in a record-breaking performance. Soon he dominated world golf and reached the No.1 position in the world rankings. Over his career he has broken several golf records and has won 14 professional major golf championships. He is one of the few players—and the youngest—to have achieved the career Grand Slam of golf. He reached the pinnacles of glory during the 2000s when stories of his multiple affairs started doing the rounds. His transgressions led to a fall in his rankings and the break up of his family. However, the gutsy player soon bounced back to regain his position as the World No.1. Bubba Watson
DID WE MISS SOMEONE?
CLICK HERE AND TELL US
WE'LL MAKE SURE
THEY'RE HERE A.S.A.P
Quick Facts

American People
American Men
Stanford University
Tall Celebrities
Tall Male Celebrities
Childhood & Early Life
He was born as Eldrick Tont Woods to Earl Woods and Kultida; he was nicknamed Tiger in honour of his father’s friend. He has three half-siblings through his father’s previous marriage. He is of mixed ancestry. His father was a Vietnam War Veteran.
He was introduced to golf when he was just two by his father who had himself been an amateur golfer. He excelled in golf and went on to win the Junior World Golf Championships six times.
He attended Western High School from where he graduated in 1994. He became a U.S. Junior Amateur champion when he was 15 years old. He would win the championship three times.
He enrolled at Stanford University under a golfing scholarship in 1994. He left after two years to pursue golfing as a career. 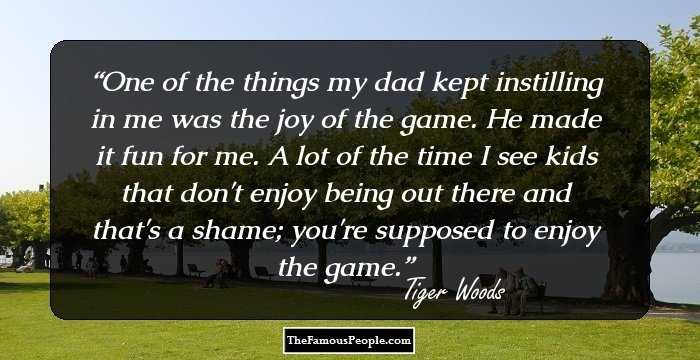 Quotes: Me, Time, I
Continue Reading Below
Career
After becoming a professional golfer in 1996 he was immediately offered deals with Nike, Inc., and Titleist as he had become famous because of his collegiate career.
He won the Masters, his first major tournament in 1997. He was ranked No.1 in the Official World Golf Rankings. He won the PGA Championship in 1999.
He had a great start to the new millennium with six consecutive wins in 2000. One of his victories for the year was the U.S. open where he broke or equaled nine records.
He won several golfing titles that season and by winning the 2001 Masters Tournament, he became the first player to win all four major professional titles at the same time.
The next two seasons were not that great for him. However his form returned in 2005 and he won six official PGA Tour money events. He closed the 2006 season with 54 wins.
His great form continued through the next couple of years. However a knee surgery in the later part of 2008 forced him to take a short break.
He was enthusiastically welcomed back to golf in 2009. He did not disappoint his fans and performed well winning the 2009 Presidents Cup with an amazing performance.
There had been some scandals and controversies involving his personal life in late 2009 which hampered his performance in 2010. His sponsors cancelled their contracts and his rankings also fell. For the first time in his career he could not win a single event.
In 2011 his dismal performances continued. He fell to No.7 rank by March. Over the year his personal, professional, and health woes continued and he fell to No. 58.
Continue Reading Below
The 2012 season was better for him — he won two tournaments at the beginning. He went on to win the Arnold Palmer Invitational and the Memorial Tournament.
By 2013 he was back to his original form. He won the Farmers Insurance Open in January and the WGC-Cadillac Championship in March. A win in the Arnold Palmer Invitational re-established his position as the World No.1. 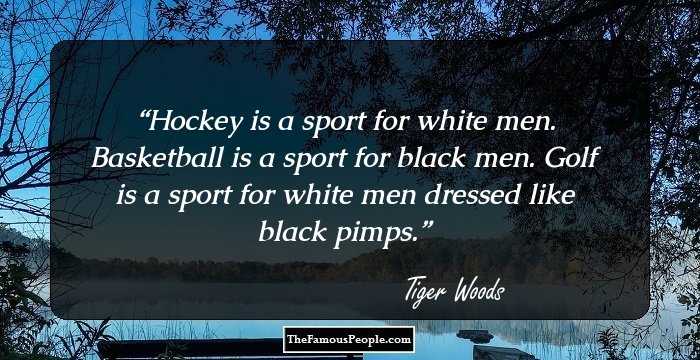 Quotes: Like
Major Works
With 79 official PGA Tour events, he had been hailed as the “greatest closer in history”. He was the youngest among the few players to have won all four professional major championships. He is also the only one to have completed the Career Grand Slam in a row.
Awards & Achievements
He was inducted into at The California Museum for History, Women and the Arts in Sacramento in 2007.
The Associated Press named him the “Athlete of the Decade” in December 2009. 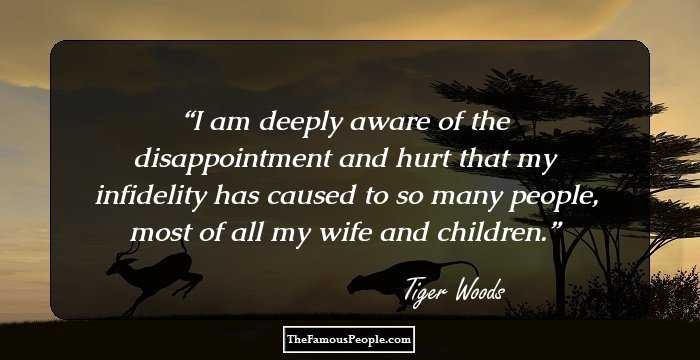 Quotes: Children, I
Personal Life & Legacy
He married former Swedish model Elin Nordegren in 2004. They had two children.
In 2009 reports of his extramarital affairs with multiple women began surfacing. Even though he denied it in the beginning he eventually accepted his transgressions. This led to the couple’s divorce in 2010.
Trivia
This famous golfer is of mixed African American, Native American, Chinese, Thai and Dutch ancestry.

Quotes By Tiger Woods | Quote Of The Day | Top 100 Quotes

See the events in life of Tiger Woods in Chronological Order