Born In: sixth Chief Justice of the United States

Salmon Portland Chase was an American jurist and politician. He served as the twenty-fifth Secretary of the Treasury of the United States under Abraham Lincoln. During his tenure as Secretary of Treasury he effectuated the National Banking Act. He was instrumental in setting up a national bank and also introduced paper currency for the first time thus empowering the federal government. He was the sixth Chief Justice of the United States and served as the twenty-third Governor of Ohio. He was a strict abolitionist whose early career saw him as a lawyer who frequently defended fugitive blacks and was even tagged as “the attorney general for fugitive slaves”. Formerly a Whig, he aided in forming anti-slavery ‘Liberty Party’ and remained one of its leaders. He was involved in different reform activities including anti-slavery movements. After the Mexican War he helped in forming the ‘Free Soil Party’ and coined the slogan "Free Soil, Free Labor, Free Men" for it. He also served as a U.S. Senator from Ohio during his term he protested measures like the Kansas-Nebraska Act and the Compromise of 1850 as these could deter liberty and freedom. The manifesto ‘Appeal of the Independent Democrats’ written by him and Joshua Giddings and signed by eminent politicians of America was a classic articulation of protest against expansion of slavery.
Continue Reading Below Born In: sixth Chief Justice of the United States

American People
Chief Justices
Political Leaders
American Men
Male Lawyers
Childhood & Early Life
Salmon Portland Chase was born in January 13, 1808, to Ithamar Chase and Janet Ralston in Cornish, New Hamsphire.
In 1817, Salmon’s father died leaving his wife and ten children with little resources.
He received his primary education at a school in Windsor, Vermont and thereafter at a school in Worthington, Ohio.
During 1820 to 1824, he stayed in Ohio with his uncle Bishop Philander Chase who was a prominent figure in the Protestant Episcopal Church. His other uncle Dudley Chase was a U.S. Senator from Vermont.
In 1822, he joined the Cincinnati College. He later enrolled in Dartmouth College and graduated from the same in 1826. While in Dartmouth he worked as a teacher at the ‘Royalton Academy’ in Royalton, Vermont.
He moved to Washington, D.C. and worked as a school headmaster and studied law under the guidance of U.S. Attorney General William Wirt. In 1829, he was admitted to the bar. 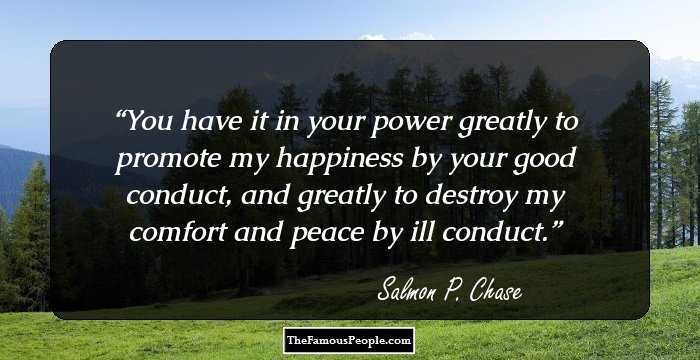 Quotes: You, Happiness, Power, Peace
Continue Reading Below
You May Like

The Sexiest Men Of 2020, Ranked
Career
In 1830, he moved to Cincinnati to begin legal practice. In no time he became a prominent figure in the Cincinnati bar as an abolitionist lawyer. He published a version of laws of Ohio with annotations which became a standard for a long time.
His early career saw him working with the ‘American Sunday School Union’ as a lawyer who frequently defended fugitive slaves.
During the Cincinnati Riots (1836) several events including assault of Games G. Birney’s press had deep impact on him following which he got associated with the anti-slavery movements.
In the case of ‘Jones v. Van Zandt’ held in the U.S. Supreme Court, he drew much attention for his argument on constitutionality of laws related to fugitive slaves. He insisted that the Constitution does not empower the federal government to establish slavery in any place. He contested that a man ceases to be a slave of a state, once he leaves the state’s jurisdiction.
In 1840, he was elected to the Cincinnati City Council as a member of Whig party. The very next year he left the Whig party.
He helped in the formation of the ‘Liberty Party’ and remained its leader in Ohio for seven years. In 1843, he drafted the national Liberty platform and in 1845 he prepared the Liberty address.
As a leader of the ‘Liberty Party’ he made efforts to unite the party with ‘Van Buren Democrats’ or the ‘Barnburners’ to create the ‘Free Soil Party’.
The Free-Soil platform was drafted by him. In 1848, he was instrumental in Van Buren’s nomination for the position of President.
He became a U.S. Senator from Ohio on March 4, 1849 under the membership of Free Soil. During his tenure as a Senator till March 3, 1855, he advocated anti-slavery movements and aimed at putting pressure so that the Northern Democrats oppose slavery expansion.
Continue Reading Below
He opposed measures like the Kansas-Nebraska Act and the Compromise of 1850 which could deter liberty and freedom.
His effort to unite the collapsing Whig Party with the anti-slavery Democrats led to the formation of the ‘Republic Party’.
One of the initial manifestos of the ‘Republic Party’, ‘The Appeal of the Independent Democrats in Congress to the People of the United States’ published on January 24, 1854, was written by him and Joshua Giddings.
In 1855, he became the first Republican governor of Ohio. His tenure as governor (from January 14, 1856 to January 9, 1860) saw him advocating for prison reform, public education and rights for women.
In 1860, he looked for a Republican presidential nomination. Since he was against a ‘protective tariff’ approved by many Republicans and also his collaboration with the Democrats did not go well with the Republicans who formerly belonged to Whigs, he could not garner much support. He lost to Abraham Lincoln at the 1860 Republican National Convention.
He became a U.S. Senator on the ticket of the ‘Republic Party’ on March 4, 1861, but resigned after three days to serve as the ‘Secretary of the Treasury’ under President Abraham Lincoln. His tenure as the ‘Secretary of the Treasury’ was from March 7, 1861 to June 30, 1864.
In 1861, he participated as a member of the ‘Peace Convention’ at the Washington, D.C.
Salmon Portland Chase was given the responsibility to design the greenback demand note, the first federal currency notes of the U.S. Many of the paper currencies bore his picture.
In 1864, he was efficacious in inducting the phrase ‘In God We Trust’ on the U.S. coins.
Continue Reading Below
In October 1864, Abraham Lincoln suggested Chase’s name as probable Chief Justice of the Supreme Court after the death of Chief Justice Roger B. Taney. Chase’s nomination was issued by Lincoln on December 6, 1864. The Senate confirmed his name on that very day. He served as Chief Justice from December 6, 1864 till his death. As the Chief Justice he admitted attorney John Rock of African-American origin, contrary to pro-slavery Roger B. Taney.
In 1868, he presided as Chief Justice at the impeachment trial of President Andrew Johnson. The same year he failed to secure Democratic presidential nomination.
In 1871, he endorsed Clement Vallandigham’s (Leader of ‘Ohio Democratic Party’) ‘New Departure’ policy.
In 1872, he aided in founding the ‘Liberal Republican Party’ and was unsuccessful to bid for its presidential nomination. 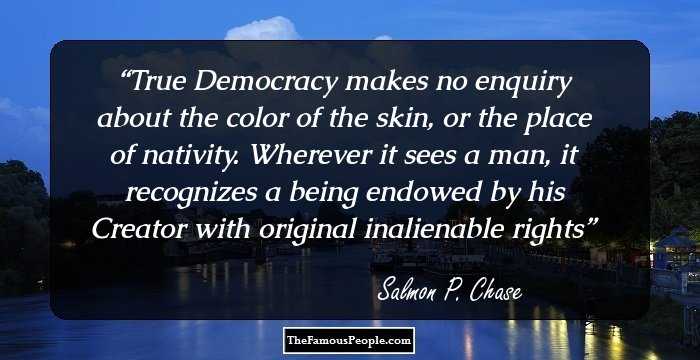 Major Works
During his tenure as ‘Secretary of Treasury’ when the Civil War was in full swing, he effectuated the National Banking Act. He was instrumental in setting up a national bank and also introduced paper currency.
The changes in the American financial policy ensured a market for government bonds that could be used in aiding war effort. In 1862, he along with ‘Jay Cooke & Company’ managed to sell government war bonds worth $500 million. He set up the ‘Bureau of Internal Revenue’ to collect taxes. It was later called the ‘Internal Revenue Service’.
Personal Life & Legacy
In 1834, Salmon Portland Chase married Catherine Garniss. While giving birth to their first child, Catherine died in 1835. After her death he became more spiritual and involved himself in different abolition movements.
He was an active member of the Cincinnati based ‘St. Paul Episcopal Cathedral’.
In 1839, he married Eliza Smith and the couple had three children. She died in 1845 due to tuberculosis.
In 1846, he married Sarah Bella Dunlap Ludlow. She died on January 13, 1852.
He had many children but only two of them survived to adulthood.
On May 7, 1873 he died after suffering a stroke in the New York City. He was first buried in the ‘Oak Hill Cemetery’ in Washington, D.C. His final resting place is ‘Spring Grove Cemetery’ in Cincinnati, Ohio.
Trivia
The ‘Chase National Bank’ set-up on September 12, 1877, was named after him. The bank later merged with the ‘Bank of the Manhattan Company’ to become the ‘Chase Manhattan Bank’. The ‘Chase Manhattan Bank’ again merged with ‘JPMorgan & Co.’ and is presently known as the ‘JP Morgan Chase’.
In 1975 his birthplace was declared a National Historic Landmark.
The largest denomination of the American currency, the United States $10,000 bill, contains his picture.
Many places and institutions including Chase City, Virginia, ‘Salmon P. Chase College of Law’ at the ‘Northern Kentucky University’ and ‘Chase Hall’ at ‘Harvard Business School’ were named after him.
Recommended Lists:
Chief Justices #10
Leaders #939
Lawyers & Judges #176
You May Like

See the events in life of Salmon P. Chase in Chronological Order