Robert Treat Paine was one of the Founding Fathers of the United States of America who signed the Declaration of Independence on behalf of Massachusetts. A patriotic judge and politician, Paine was raised by highly religious and respectable parents who imbibed in their children a high regard for moral values and principles. A brilliant student, he finished school with top honours and enrolled at Harvard College where he actively participated in debates and discussions on scientific issues. He traveled widely as a young man and met many influential people who helped shape his personality. He was profoundly interested in politics and was one of the earliest Americans to oppose the British policies and raise his voice for the cause of freedom. When he got elected as a delegate to the provincial convention, he used this opportunity to work for the causes he believed in. He played a major role in American politics in the aftermath of the Boston massacre. In the trial following the massacre, Paine led the counsel for the prosecution of the British soldiers. He gained much prominence after this incident even though his side did not win the trial. He signed the Declaration of Independence in 1776 as a representative of Massachusetts at the Continental Congress. 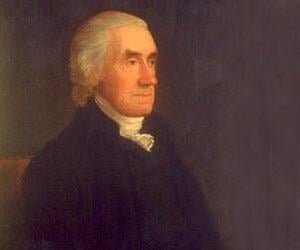 Donald Trump
Political Leaders #3776
Lawyers #748
Leaders #4975
DID WE MISS SOMEONE?
CLICK HERE AND TELL US
WE'LL MAKE SURE
THEY'RE HERE A.S.A.P
Quick Facts

American People
American Men
Harvard College
Male Leaders
Male Lawyers
Childhood & Early Life
Robert Treat Paine was born in Boston to Rev. Thomas Paine and Eunice Paine. His father was a pastor who became a merchant later on. He had four siblings.
He attended the Boston Latin School and completed his schooling by topping his class. Then he enrolled at Harvard College when he was only 14 and graduated in 1749 at the age of 18. While in college he formed a literary club and developed a scientific bent of mind.
Continue Reading Below
You May Like

The Hottest Male Celebrities With The Best Abs
Career
By the time he graduated from college, his father had suffered huge business losses, and Paine had to take up jobs to make ends meet. The first job he took was a teaching position at his alma mater Boston Latin School.
In 1751, he tried his hands at business by making voyages to North Carolina, Spain, and the Azores. While he was in Philadelphia, he got the chance of getting acquainted with various prominent personalities which proved to be a great learning experience.
He led a whaling expedition from Cape Cod to Greenland in 1754 as the Captain of the ship Seaflower. During this voyage, he maintained an illustrated log of the whaling adventure.
Not finding much success in his voyages, he returned to Massachusetts and in 1755 began to study law with Judge Samuel Willard who was his mother’s cousin.
He served as a chaplain in the Crown Point expedition during the French and Indian War in late 1755.
He went to Boston in 1756 to continue his legal education under Benjamin Prat who later became the chief justice in New York.
He was admitted to the Massachusetts Bar in 1757. At about the same time, his father died and Paine was saddled with significant family responsibilities.
He settled in Boston and traveled frequently to Cambridge, Plymouth, and Worcester in order to attend court sessions. By 1758, he was qualified for practicing before the Superior Court.
In 1761, he shifted to Massachusetts where he was made the justice of peace in 1763, and barrister in 1764. A dedicated lawyer with high principles, he became a prominent and highly respected citizen.
Continue Reading Below
He became very successful in his law practice and his clientele included the wealthiest and most influential people of the city.
He was chosen to represent Taunton at the provincial convention held in Boston in 1768. The purpose of holding this convention was to discuss the landing of the British Troops in Boston which greatly disturbed those believing in colonial rights.
On 5 March 1770, the Boston Massacre occurred in which the British soldiers stationed at Boston killed five civilians and injured many others. In the resulting trial, Paine led the prosecution of Captain Thomas Preston and his British soldiers while John Adams led the defence team.
Paine’s fame reached greater heights after this incident even though he had lost the trial. His involvement in patriotic activities increased after this.
He was elected to the Provincial Congress in 1774 and 1775 where he represented Taunton.
In 1774, he was elected to represent Massachusetts at the first Continental Congress in place of an absent loyalist committee member.
A peace lover, he signed the Olive Branch Petition that was sent to King George III in July 1775. The King rejected the petition for negotiation which convinced the colonists that they would have to take some action to bring about the desired change.
On 2 July 1776, the vote for Adoption of the Declaration of Independence was taken, and the Declaration was signed by 56 delegates over the next few months. Paine signed the Declaration on behalf of Massachusetts.
He was appointed Massachusetts Attorney General in 1777, a post he held till 1790.
Both his political and legal career continued for long after the independence. In 1779, he served as a member of the Executive council and in 1780 he was made a member of the committee that drafted the first state constitution to be adopted.
From 1790 till his retirement in 1804, he served as a justice of the state supreme court.
Major Works
An illustrious lawyer, he reached the highest point in his career when he led the prosecution against British Captain Preston and his soldiers after the Boston massacre in 1770. He became very well known after the incident in spite of not winning the trial.
He was one of the five delegates who had signed the U.S. declaration of Independence on behalf of Massachusetts in 1776.
Personal Life & Legacy
He met Sally Cobb in 1766 when he was 35 and she only 22. Still the age difference did not deter their romance and the couple married in 1770 after four years of courtship. The couple had eight children.
After retirement, he led a peaceful life till he died of old age related health problems in 1814 at the age of 83.
Trivia
He was nicknamed ‘Objection Maker’ due to his outspoken and frank nature.
His statue was erected in the Church Green area of Taunton to honour his memory.
Recommended Lists:
Lawyers & Judges #862
You May Like