(English Statesman, Soldier, Writer, Explorer and One of the Most Notable Figures of the Elizabethan Era)

A courtier by heart, an explorer by passion, an aristocrat and author by work and a soldier by spirit, Sir Walter Raleigh donned many hats in his lifetime. Born in a Protestant family, he completed his education from Oxford College and later on rose up to be part of the Hugenot army in France. He played an active role in the suppression of rebellions in the Siege of Smerwick and was offered the status of a landlord, after the land confiscated by the native Irish was transferred to him. It was during the Elizabethan era that he bloomed and prospered, rapidly rising up the ranks due to the favour of Queen Elizabeth I. In 1585 he was knighted and appointed warden of the mines of Cornwall and Devon. He also played a crucial role in the English colonization of North America. It was in 1594 that he set sail to hunt for the ‘City of Gold’. After his year-long expedition, he penned his experiences in a book which contributed to the legend, ‘El Dorado’. It was after the death of Queen Elizabeth I that he was imprisoned on charges of treason and executed. However, notwithstanding his unnecessary and unjust death, he was and is still considered as the most notable figures of the Elizabethan era. In fact, he was included in the list of 100 Greatest Britons in the BBC poll of 2002. British People
British Men
Male Writers
British Writers
British Explorers
Childhood & Early Life
The exact year as to when Walter Raleigh was born is questionable. While historians claim it to be somewhere around 1552, the Oxford Dictionary assumes it to be 1554. However, one thing which is certain is that he was born in Devon, England, to Walter Raleigh and Catherine Champernowne.
Belonging to a Protestant family, he developed a religious contention against Roman Catholics since an early age.
He gained his education from Oxford University before serving in the Hugenot army in France. In 1575, he was registered at the Middle Temple. 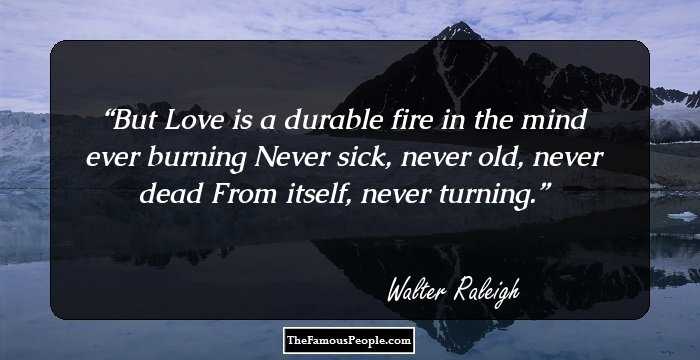 Quotes: Love, Never
Continue Reading Below
Career
From 1579, he took part in the suppression of the Desmond Rebellions. He was awarded with 40,000 acres of land including those of the coastal areas of Youghal and Lismore after the seizure and distribution.
In 1581, he returned to England and became active in court life. It was due to his ruthlessness at the siege of Smerwick and plantation of English and Scots Protestants in Munster that he was knighted in 1585. Furthermore, he was given trade privileges and the right to colonize America.
In 1581, he was appointed warden of the mines of Cornwall and Devon, Lord Lieutenant of Cornwall, and vice-admiral of the two counties. For a year, from 1585 to 1586, he even sat in the parliament as the member of Devonshire.
In the year 1592, he yet again received numerous rewards from the Queen, including the Durham House in the Strand and the estate of the Sherborne, Dorset. He was appointed Captain of the Yeomen of the Guard.
In 1588, he took on the seat of the Vice Admiral of Devon, and was in charge of looking after the coastal defences and military levies. During his seventeen years of tenure as the Irish landlord, Youghal served to be his occasional home. From 1588 to 1589, he served as the mayor of the town.
After a tumultuous phase during which he suffered from personal crisis and was imprisoned, he was released in August 1592 to help set up an expedition for an attack on the Spanish coast.
It was during the attack on the Spanish coast that the fleet successfully captured a rich prize. Though he was the in-charge of the mission, the prize had to be distributed among all.
In the 1593 parliament, he was elected a burgess of Mitchell, Cornwall. The following year, he retired from his duties and started living as a recluse at Sherborne, where he had built a new house. It was known by the name of Sherborne Lodge.
It was while living at the Sherborne Lodge that his religious orientation came to limelight. He was the only Protestant amongst the group of Roman Catholics and thus was often tagged as an atheist. He was even charged of being an atheist.
Continue Reading Below
In 1594, he first came to know about the ‘City of Gold’ in South America at the headwaters of the Caroni River. Excited by the piece of information, the following year he set sail in search of Manao through the cities which are today known as Guyana and eastern Venezuela.
Returning to England, he then penned his experiences and expeditions in a book which he entitled, ‘The Discovery of Guiana’ published in 1596. Though the book made exaggerated claims about his voyage, it was seen as the stepping stone for the ‘El Dorado’ legend.
In 1596, he actively participated in the capture of Cádiz, during which he was wounded. The following year, i.e., in 1597, he was second in command of the Islands Voyage to the Azores.
In 1597, his political career witnessed a major uphill climb as he became one of the chosen members of the parliament for Dorset. Four years later, he was chosen for the parliament of Cornwall. With this, he became the only member to sit in the parliament for three different countries.
During the beginning of the 17th century, his fortunes suffered a major decline as he faced problems managing his estates. As a result, in 1602, he sold his share of lands to Richard Boyle, 1st Earl of Cork
Meanwhile, from 1600 to 1603, he took up the duties of the Governor of the Channel Island of Jersey. In the new capacity, he modernised its defences by constructing new fort, thus protecting the approaches to Saint Helier, Fort Isabella Bellissima, or Elizabeth Castle
The good luck and high favour of the Queen on which he was riding high ended with the death of Queen Elizabeth in 1603. He was arrested and imprisoned in the Tower of London in July 1603 on charges of being involved in the main plot against King James.
He remained imprisoned until 1616 at the Tower of London. It was during this time that he penned numerous treatises. Furthermore, he wrote the first volume of ‘The Historie of the World’ which was published later on in 1628. The book provided an insight into the ancient history of Greece and Rome.
Post his release from the Tower of London in 1616; he was part of the second expedition to Venezuela in search of El Dorado. It was while at the expedition that his men attacked the Spanish outpost of Santo Tomé de Guayana on the Orinoco River.
Continue Reading Below
After his return to England, the Spanish ambassador, Count Gondomar demanded the execution of Raleigh which was agreed upon by King James. He was then transferred to London. On the journey, he was presented with numerous opportunities of escape, but he denied taking up either. 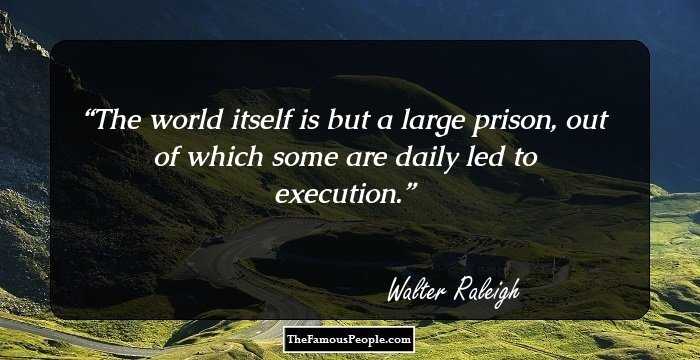 Personal Life & Legacy
In 1591, he tied the nuptial knot with Elizabeth Bess Throckmorton, who was one of the eleven ladies-in-waiting of the Queen. She was pregnant at that time.
The marriage was kept secret from the Queen. However, the surreptitious nature of the affair could not stand for long as the Queen came to know of the illegal marriage a year later. Furious at the do, she dismissed Bess from court and imprisoned them.
It was only in August 1592 that he was released from prison to help set up an expedition for an attack on the Spanish coast. She was released a couple of months later in December.
Though the couple were separated from each other for several years, they were devoted to each other. During his absence, he took over all the responsibilities of managing the family estate and fortune.
The couple was blessed with two more sons, Walter and Carew. Their first-born had died a few months after his birth due to plague.
He was arrested in 1618 by the men of King James in an effort to appease the Spanish, especially their ambassador, Count Gondomar. Later on, a request for his execution by the later was successfully passed upon.
He was beheaded on October 29, 1618, in the Old Palace Yard at the Palace of Westminster. It is said that his final words were, “Strike, man, strike”. His head was preserved and presented to his wife.
He was buried at the local church in Beddington, Surrey - the home of Lady Raleigh. However, later on, he was finally laid to rest in St. Margaret's, Westminster.
It is reported that the wife of this English aristocrat kept his head in a velvet bag until her death, 29 years later. It was only thereafter that his head was interred in his tomb in Westminster.
Trivia
This English aristocrat and explorer and author of ‘The Discovery of Guiana’ was responsible for introducing potatoes and tobacco smoking in Britain. 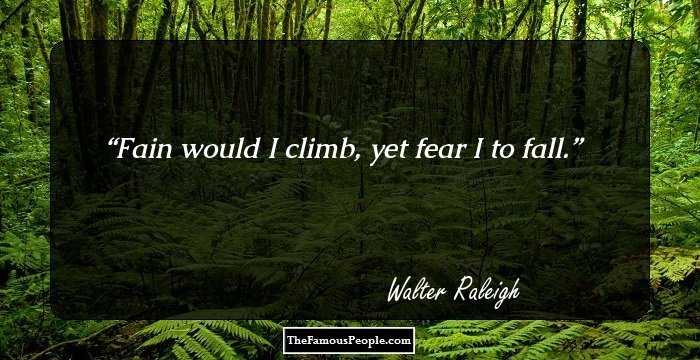 See the events in life of Walter Raleigh in Chronological Order