DID WE MISS SOMEONE?
CLICK HERE AND TELL US
WE'LL MAKE SURE
THEY'RE HERE A.S.A.P
Popularity Index
112
Physicists #5
Scientists #9
Quick Facts

Who was Richard Feynman?

Richard Feynman was an American physicist specializing in quantum mechanics, quantum electrodynamics, and particle physics. After growing up in Queens, New York City, he went on to receive his undergraduate degree from the ‘Massachusetts Institute of Technology’ and a doctoral degree from ‘Princeton University.’ He used his gained expertise in physics to contribute to the development of the atomic bomb, in what was called the ‘Manhattan Project,’ during ‘World War II.’ Working with other professionals in his field, he went on to receive a ‘Nobel Prize’ in Physics for research on quantum electrodynamics. Another significant study which he undertook was the super-fluidity in super-cooled liquid helium. The Feynman diagrams, as they are known today, were a concept developed by this eminent scientist; the diagrams are used to pictorially represent the behavior of sub-atomic particles. Dabbling with particle physics, he came up with the Parton model. He was later credited with expanding physics research through the creation of quantum computing and his theories concerning nanotechnology. Over the course of his career, Feynman took on a number of assistantships and appointed positions at various prestigious institutions across the country. He presented lectures which were later published and are now considered one of the most well-known books ever written on physics. Physicists
American Men
Princeton University
Massachusetts Institute Of Technology (MIT)
Childhood & Early Life
Richard Phillips Feynman was born on May 11, 1918, in New York City, USA, to Melville and Lucille.
When Richard was five years old, Lucille gave birth to another boy, who died after four weeks. Richard’s sister Joan was born four years later.
He attended ‘Far Rockaway High School’ from 1931 to 1935, and then attended the ‘Massachusetts Institute of Technology.’
In 1939, he was named a Putnam Fellow for a top five performance in the ‘William Putnam Lowell Mathematical Competition,’ one of the most prestigious academic competitions in the US and Canada.
He continued his studies at ‘Princeton’ where he was surrounded by his academic peers like Albert Einstein, Wolfgang Pauli, and John Archibald Wheeler.
He completed a thesis titled ‘The Principle of Least Action in Quantum Mechanics’ in 1942, with Wheeler as his advisor. 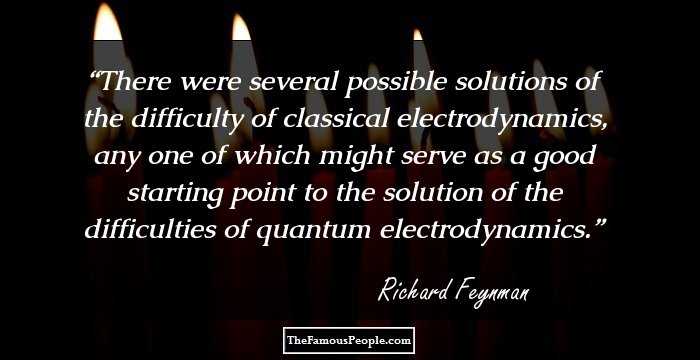 Tall Celebrities
Tall Male Celebrities
Male Physicists
Male Scientists
Career
Upon completing his thesis in 1942, Feynman was appointed assistant professor of Physics at the ‘University of Wisconsin,’ Madison.
Later that year, he was asked to join the ‘Manhattan Project’ in Los Alamos, New Mexico to work on perfecting the atomic bomb.
His responsibilities on the project included calculating neutron equations for nuclear reactors and developing safety procedures for the storage of project materials until its completion in 1945.
His career was then marked by a string of prestigious assistantships and professorships at various universities. From 1945 to 1950, he worked as a professor of theoretical physics at ‘Cornell University.’
In 1948, he published his representations of mathematical sequences of subatomic particles, named the ‘Feynman Diagrams.’ His diagrams contributed to the understanding of quantum field and solid-state theories.
From 1950 to 1959, he worked as professor of theoretical physics at the ‘California Institute of Technology.’
The physicist dedicated his research to breakthroughs in superfluidity of super cold liquid helium and weak decay, competing against his contemporaries in the field.
In the 1960s, he helped revamp Caltech’s physics department by delivering a series of lectures and introductory level explanations to freshman at the university. These lectures were written and published as a set of textbooks called ‘The Feynman Lectures of Physics.’
He was awarded the 1965 ‘Nobel Prize’ in Physics for his work on quantum electrodynamics which expanded upon his thesis.
Continue Reading Below
In 1985, he published a book of stories of his life and career. Titled ‘Surely You’re Joking, Mr. Feynman,’ the book featured in the national bestseller list.
In 1986, he was invited to investigate the explosion of NASA space shuttle ‘Challenger.’ Richard ascertained that the fatal explosion was caused due to low launch day temperatures.
n a televised demonstration, Feynman showed that the rubber rings that sealed the joints of the spacecraft were unable to expand quickly enough in low temperatures.
His findings shed scientific and political light on the matter, and this was his final major contribution to the field of physics. 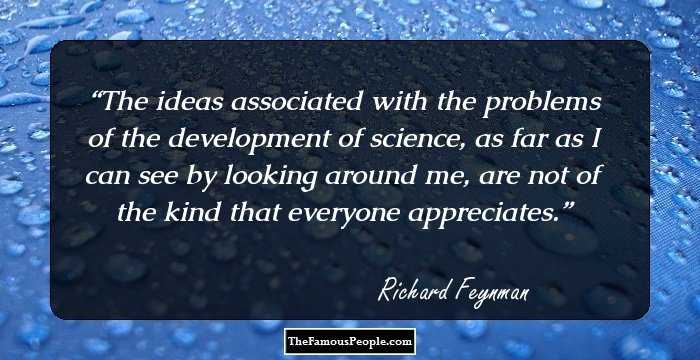 Quotes: Me, I
Recommended Lists:

Taurus Scientists
American Physicists
American Scientists
Taurus Men
Major Works
He completed his thesis ‘The Principle of Least Action in Quantum Physics’ which laid the foundation for his Nobel Prize winning work on quantum electrodynamics. The theory consisted of two parts; while the first catered to path integral formulation of quantum mechanics, the other dealt with pictorial representation of sub-atomic particles, better known as the ‘Feynman Diagrams.’
‘The Feynman Lectures on Physics’ was published in 1964, becoming arguably the most popular physics textbook.
Awards & Achievements
Feynman was honored with several awards and achievements for his contribution to scientific advancement. He also received the prestigious ‘Albert Einstein Award’ and ‘E.O. Lawrence Award.’
He was honored with the ‘Nobel Prize’ in Physics in 1965 for his work on quantum electrodynamics.
Continue Reading Below
He won the ‘Oersted Medal’ in 1972 for being an outstanding teacher of physics.
He won the ‘National Medal of Science’ for contributions to physics in 1979. 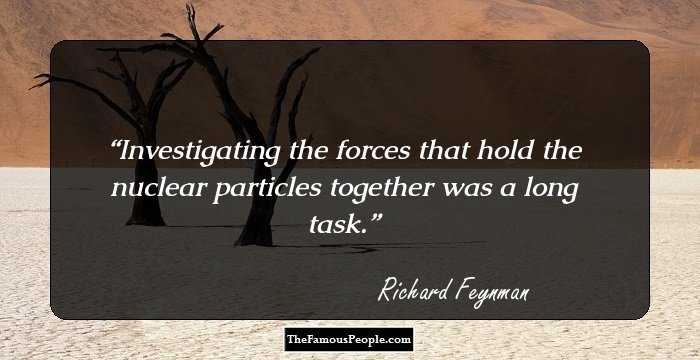 Quotes: Together
Personal Life & Legacy
Feynman was married to his high-school sweetheart Arline Greenbaum until her death from tuberculosis in 1945. The demise of his wife caused much emotional turmoil in Richard’s life. He was also plagued by the guilt of contributing towards the destructive atomic bomb which resulted in bouts of depression for some years.
In 1952, he married a woman named Mary Louise Bell; however, the marriage ended in divorce shortly after.
He met Gweneth Howarth at a European conference. He married Gweneth in 1960 after Gweneth was approved for US citizenship. Together, the two had a son named Carl and adopted a daughter named Michelle.
It was later discovered that he had abdominal cancer, which he battled while performing investigative work on the ‘Challenger.’ Towards the end of his life, he took up art and became particularly interested in drawing portraits.
In 1987, his cancer was treated surgically but it led to further complications and hospitalization.
He fought through tumors, ulcers, and kidney failure until his death on February 15, 1988, at the age of 69. His mortal remains were buried at ‘Mountain View Cemetery and Mausoleum’ in Altadena, California.
Trivia
During his years at ‘Caltech,’ Feynman offered prizes for creating the world’s smallest motor and writing the contents of ‘Encyclopedia Britannica’ on a pinhead.
You May Like

Quotes By Richard Feynman | Quote Of The Day | Top 100 Quotes

See the events in life of Richard Feynman in Chronological Order