Rand Paul is an American politician and a medical professional who currently serves as the junior US senator from Kentucky, alongside Mitch McConnell. He was sworn in as a senator in 2011. Paul, who started his own medical practice in ophthalmology in 1993, entered the political arena in 2010, when he ran for a seat in the ‘United States Senate.’ A staunch supporter of the ‘Tea Party Movement,’ Paul is a ‘Republican’ with conservative-libertarian views. He actively participated in the congressional and presidential campaigns for his father, Ron Paul, former US representative from Texas. In 2016, he announced his nomination for the 2016 US presidential election as a ‘Republican’ candidate. He finished fifth out of the 12 ‘Republican’ candidates. He is also the founder of ‘Kentucky Taxpayers United, ‘an anti-tax group in Kentucky. In 2009, he founded the ‘Southern Kentucky Lions Eye Clinic,’ a non-profit organization providing eye check-ups and surgeries to those in need. He is also an advocate of privacy reforms, term limits, and balanced budget amendments. In 2017, Paul was brutally assaulted by his neighbor and sustained broken bones. American People
Duke University
Male Leaders
Capricorn Leaders
American Leaders
Childhood & Early Life
Randal Howard Paul was born on January 7, 1963, in Pittsburgh, Pennsylvania, to Carol and Ron Paul. His father, Ron, is a politician and a physician.
Ron is also a former US representative of Texas who ran for the presidential elections thrice. Rand was the third of the five children born to his parents.
Although, he was born in Pittsburgh, Rand was raised in Lake Jackson, Texas. His father, for a long time, was the only obstetrician in Brazoria County.
He went to ‘Brazoswood High School.’ While in school, he played as a defensive back on the football team and was also quite interested in swimming.
Rand’s interest in politics was evident when he started interning at in his father’s office after he was elected to the ‘US House of Representatives.’ Paul also attended the 1976 ‘Republican National Convention.’ He also read about economists and studied the writings of Ayn Rand.
He attended ‘Baylor University’ in 1981. There, he was a frequent contributor to ‘The Baylor Lariat,’ a student newspaper. He was also a member of a secret organization called ‘The NoZe Brotherhood.’
He dropped out of the university to attend the ‘Duke University School of Medicine,’ which was also his father’s alma mater. No undergraduate degree was required to enter the graduate school, and this made it easy for Rand. He earned his MD in 1988 and completed his residency in 1993. 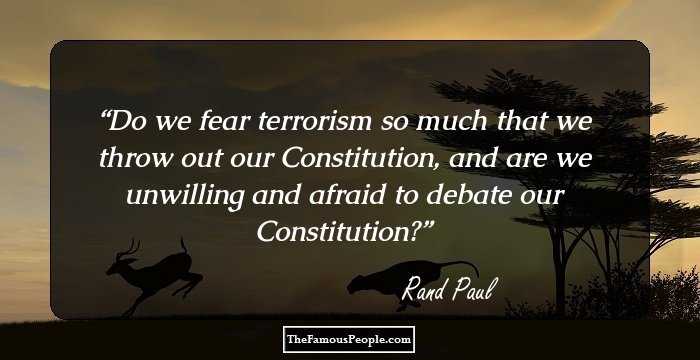 Famous Beautiful Women With Green Eyes
Career
Rand interned at the ‘Georgia Baptist Medical Center’ in Atlanta, Georgia. After completing his residency, he bagged a job with John Downing of the ‘Downing McPeak Vision Centers.’ and moved to Bowling Green, Kentucky.
He then joined the ‘Graves Gilbert Clinic’ in Bowling Green and continued working there for 10 years, before starting his own practice. During his medical career, he also performed free eye surgeries for poor people in developing countries. In 1997, he established the ‘National Board of Ophthalmology’ (NBO) as a protest against the ‘American Board of Ophthalmology’ (ABO) board-certification process. The ‘ABO’ had changed its policy and had started providing certificates that were valid for 10 years instead of a lifetime, and the ‘NBO’ challenged this decision.
The ‘NBO’ was incorporated in 1999 but was dissolved in 2000, after the failure of filing certain paperwork with the ‘Kentucky Secretary of State’s Office.’ It was recreated in 2005, only to be dissolved again in 2011.
In 2009, he established the ‘Southern Kentucky Lions Eye Clinic,’ a non profit organization that treated under-privileged people with eye conditions. 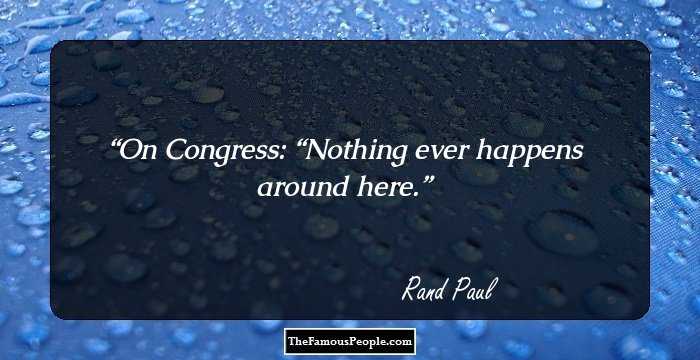 Political Career
Rand’s political involvement began when he was 13 years old, and he often spent time in his father’s office. He was also the head of the local chapter of the ‘Young Conservatives of Texas’ at ‘Baylor University.’
In 1994, he founded ‘Kentucky Taxpayers United,’ an anti-tax group, after President Bush broke his election promise of not raising taxes. In 1996, he campaigned for his father’s run in the congressional elections, where his father defeated Greg Laughlin, who was supported by the ‘National Republican Congressional Committee’ (NRCC), along with leaders such as George W Bush.
A lifelong ‘Republican,’ Rand started getting involved in real politics in 2009, when he gave a speech in support of the ‘Tea Party Movement,’ as a potential candidate during one of the ‘Tea Party’ rallies. He then announced his run for the ‘US Senate’ as a ‘Republican.’ He won by defeating Trey Grayson.
He immediately started preparing to face Kentucky Attorney General Jack Conway. However, his statement about the ‘Civil Rights Act of 1964’ being too broad and his questions about its constitutionality invited a lot of controversy.
Continue Reading Below
He defeated Conway in the general election and was sworn in as Kentucky’s junior senator on July 5, 2011. Since the beginning of his term, he has worked on issues such as health, education, small businesses, reduction of social security benefits, and reduction in federal debt.
He voted against the extension of three key provisions of the ‘USA PATRIOT Act.’ He also criticized President Obama for not acquiring consent for ‘Operation Odyssey Dawn.’
During the debt ceiling crisis, he stated that he would support the raising of the debt ceiling only if a balanced budget amendment was enacted. Later, in 2012, he was in the news for his apparent run for the 2012 presidential election as a ‘Republican’ nominee.
In 2013, he questioned the use of drones and its potential use in the US. He also gave an almost 13-hour-long filibuster speech in the ‘Senate,’ against John O Brennan’s confirmation as the new head of the ‘Central Intelligence Agency’ (CIA).
He also questioned legislative proposals to expand federal gun-control measures and threatened another filibuster. In 2014, he filed a law suit against Obama over the collection of phone metadata by the government, claiming that the government had violated the ‘Fourth Amendment.’
In 2015, he brought back the ‘Federal Reserve Transparency Act’ and introduced the ‘FAIR’ Act. He also spoke for more than 10 hours in opposition of the reauthorization of Section 215 of the ‘PATRIOT Act.’
In April 2015, he announced that he would be running for president. He spoke about the abolition of gun-free zones in May 2015.
After Hillary Clinton announced that she would be running for president, Rand declared on social media that she would be a “disaster.” However, in February 2016, he withdrew his candidature from the ‘Republican Party,’ as he had failed to garner attention, especially after a poor show at the ‘Iowa Caucus.’
Although his political career seems limited, Rand claims that it is far from over. On November 8, 2016, he was formally re-elected as a senator.
Continue Reading Below
In 2017, he was accused by Senator John McCain of having been involved with Russian president Vladimir Putin, after Rand’s objection to the addition of Montenegro to the ‘North Atlantic Treaty Organization’ (NATO).
He was also one of the 22 members who signed the letter that urged President Trump to withdraw from the ‘Paris Agreement.’ He also questioned Trump’s missile strike on Syria.
He introduced a bill to replace the ‘Affordable Care Act.’ that, unlike ‘Obamacare,’ included each person having a tax credit of $5,000 and did not require everyone to have coverage. The bill was pulled by the Republicans from a vote.
In September 2017, he tweeted that the ‘Graham-Cassidy’ bill retained 90% of ‘Obamacare’ and called it “more Obamacare Lite." He also responded to Trump, saying that he could not be forced into supporting the bill, after the president tweeted, “Rand Paul, or whoever votes against Hcare Bill, will forever (future political campaigns) be known as 'the Republican who saved Obamacare.’”
Awards & Achievements
Paul co-authored the book ‘The Tea Party Goes to Washington’ (2011). He also authored ‘Government Bullies: How Everyday Americans Are Being Harassed, Abused, and Imprisoned by the Feds’ (2012). He was named one of ‘Time’ magazine’s ‘World's 100 Most Influential People’ in both 2013 and 2014.
He has also contributed to ‘Time.’ 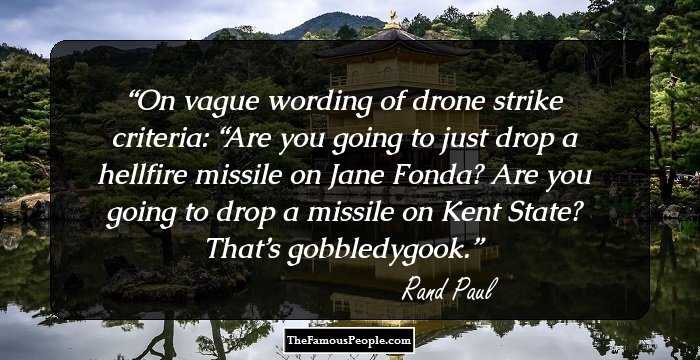 Quotes: You
Personal Life & Legacy
Paul married Kelley Paul in 1990. Kelley is a freelance writer. The couple have three children.
Paul is deaf in one ear.
He currently lives in Bowling Green, Kentucky.
On November 3, 2017, Paul was mowing his lawn, wearing noise-canceling earphones, when he was assaulted by his 59-year-old neighbor, Rene Boucher.
Rene was arrested and charged with one count of fourth degree assault but was released on a $7,500 bond. It was initially stated that Paul had only sustained minor injuries but it was later revealed that the attack had broken six ribs and had lacerated Paul’s lungs.
On November 9, 2017, Boucher was charged with assaulting a member of ‘Congress,’ and was given a 30-day imprisonment, with a year of supervised released.

See the events in life of Rand Paul in Chronological Order