(The First Female Vice President of the United States)

Kamala Harris is the 49th and current vice president-elect of the United States. She assumed the office on 20 January 2021, alongside President-elect Joe Biden.  Half-Indian, half-Jamaican, Harris is the first woman, the first Black person and the first Asian-American to be elected vice president.  She has been serving as the junior US Senator from California since 2017. She serves on the Homeland Security & Governmental Affairs Committee, the Committee on the Judiciary, the Committee on the Budget, and the Select Committee on Intelligence. An associate of the Democratic Party, she is the first South Asian-American woman and the second African-American woman to serve as a USA senator in the nation’s entire history. During her extensive career as a politician, Kamala Harris has always tried to adopt measures that encourage social progressivism. For instance, as San Francisco’s district attorney, she steadfastly refused to seek the death penalty for a man accused of murdering a police officer as she is opposed to capital punishment. Kamala Harris is one of those few politicians whose mission is to reform the entire system from within rather than by crusading from the outside. Born to a Tamil Indian physician mother and a black Stanford University professor, she grew up in an inter-cultural home. Always interested in social justice, she went on to become a lawyer. Following a successful legal career, she ventured into politics. Kamala Harris was in the race for the Democratic nomination for President of the United States in the 2020 election, but later on opted out of the race, citing lack of funds. Harris was very close to her maternal grandfather, an Indian diplomat named P. V. Gopalan. She and her younger sister Maya went to both a Hindu temple and a black Baptist Church while growing up.
When Harris was seven, her parents separated and her mother was given the custody of both the children. Subsequently, the sisters and their mother moved to Montreal, Québec, Canada.
Harris studied at Westmount High School in Quebec and later attended Howard University in USA where she majored in political science and economics.
In 1989, she returned to California and earned her Juris Doctor (J.D.) from University of California, Hastings College of the Law. The following year, she was admitted to the State Bar of California. 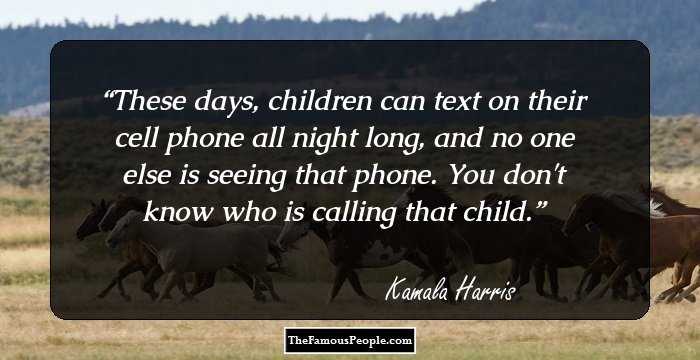 Quotes: Children
Continue Reading Below
Career
From 1990 to 1998, Kamala Harris served as a deputy district attorney in Alameda County, California, prosecuting cases of robbery, murder, and child rape. In the late 1990s, she worked at the San Francisco District Attorney's Office.
In 2000, Harris was recruited by Louise Renne, San Francisco's elected City Attorney, for the position of head of the Community and Neighborhood Division.
In 2003, Harris defeated Terence Hallinan to become the San Francisco District Attorney. She is the first South-Asian and black woman to achieve the position. She was again re-elected in November 2007. As the D.A., she began a program that offers first-time drug dealers the opportunity to earn high school diploma and find jobs.
In 2009, Harris got her book ‘Smart on Crime: A Career Prosecutor's Plan to Make Us Safer’ published. In the book, she attempted to analyse criminal justice from an economic perspective.
She worked for the California District Attorney's Association as well as the National District Attorneys Association in different capacities in the 2010s.
In 2010, she campaigned in the California Attorney General election, where she faced Los Angeles County District Attorney Steve Cooley. She emerged victorious and on January 3, 2011, she became the first Jamaican American woman and the first Indian American attorney general in California. In November 2014, she was re-elected against Ronald Gold.

Kamala Harris was one of the top contenders for the 2020 Democratic nomination for President. She ran a spirited campaign but later on opted out of race due to lack of funds and endorsed Joe Biden’s candidature for president.

On August 11, 2020, Joe Biden announced Kamala Harris as his running mate for the 2020 United States presidential election. With this she became the first black woman to be a major party vice-presidential nominee.

She assumed the office on 20 January 2021, alongside President-elect Joe Biden. 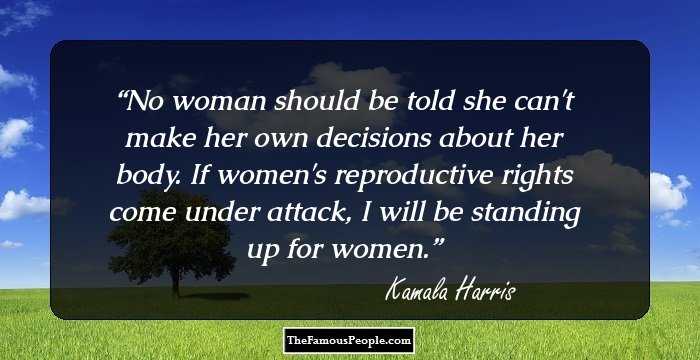 Major Works
As the San Francisco D.A., Kamala Harris developed a special Hate Crimes Unit that focussed on crimes against LGBT kids and teens. She supported same-sex marriage in California and opposed both the Proposition 8 and Proposition 22 which aimed to prevent same-sex unions.
She introduced the California Homeowner's Bill of Rights that grants homeowners more "choices while fighting to keep their home". This bill banned "dual-tracking" and robo-signing and also gave the California Attorney General more power to investigate financial frauds and set up special grand juries to impeach multi-county crimes.
In 2012, Harris sent a letter to about 100 mobile-app creators, asking them to comply with the California law in terms of privacy rights. She also warned them that if any developer’s app does not exhibit a privacy policy statement during the installation, a possible fine of $2500 might be charged for every download.
On February 12, 2015, she announced that she would launch a new agency called ‘Bureau of Children's Justice’. The bureau was created later the same year. It focuses on issues like the juvenile justice system, foster care, childhood trauma, and school truancy.
Political Positions
Kamala Harris is opposed to the death penalty although she believes in reviewing each case individually. Her position against the death penalty was tested in 2004 when SFPD Officer Isaac Espinoza was killed in the Bayview district. Following his murder, Harris stated that she would not seek the death penalty for the accused, David Hill. Eventually, he was given the maximum sentence: life imprisonment without the possibility of parole.
Harris' position against the death penalty was once again tested in 2009 in the case of Edwin Ramos who was accused of killing Tony Bologna and his two sons. Harris announced that she would seek life imprisonment without the possibility of parole instead of death penalty in this case.
Continue Reading Below
In many television interviews, she has argued for treating the "habitual and chronic truancy" among kids in elementary school as a crime committed by the parents of such children. She believes that there is a direct link between habitual absenteeism in elementary school and committing crimes later in life.
During her time as the D.A. of San Francisco, Harris developed the Environmental Justice Unit in the attorney's office and prosecuted numerous industries for pollution, including Alameda Publishing Corporation and U-Haul. She also advocated for tough enforcement of environmental security laws.
On April 6, 2017, in response to the Khan Shaykhun chemical attack, Kamala Harris charged the President of Syria, Bashar al-Assad, with assaulting and attacking Syrian kids. She stated that the president is not only a brutal dictator maltreating his own people, but is also a war criminal the other nations cannot ignore.
On August 30, 2017, Harris declared that she would co-sponsor the "Medicare for All" bill and support single-payer healthcare.
In February 2018, she was one of the senators to sign a letter arguing against President Trump's legal authority to commence an anticipatory strike against North Korea.
In May 2018, after Trump declared that USA was withdrawing from the Joint Comprehensive Plan of Action, Kamala Harris issued a statement on his decision, stating that the decision “jeopardizes our national security and isolates us from our closest allies.”
In May 2018, Harris announced that she will co-sponsor the Marijuana Justice Act. The legislation will eliminate marijuana's prevailing status as a Schedule I drug under the Controlled Substance Act. Harris believes that the move to decriminalize marijuana will help prevent the Justice Department from enforcing unfair laws.
In September 2018, she came forward to sponsor the Climate Risk Disclosure Act along with seven other senators.
Harris is in the favour of more stringent gun control laws. Owing to her consistent support for gun control, she has earned an "F" rating from the National Rifle Association. 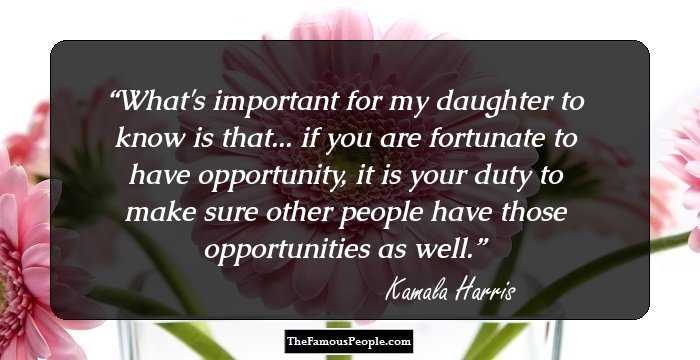 Awards & Honors
The National Urban League hailed Harris as a "Woman of Power" in 2004.
She was honoured with the Thurgood Marshall Award from the National Black Prosecutors Association in 2005.
Family & Personal Life
Kamala Harris has been married to Douglas Emhoff, a California attorney, since August 22, 2014. Through the marriage, she became the stepmother of two children.
Her sister, Maya Harris, is a MSNBC political analyst. Her brother-in-law is Tony West, a former senior official at U.S. Justice Department and currently the General Counsel of Uber.

Quotes By Kamala Harris | Quote Of The Day | Top 100 Quotes

See the events in life of Kamala Harris in Chronological Order