René Karl Wilhelm Johann Josef Maria Rilke, better known as Rainer Maria Rilke, was an Austrian poet often considered a transitional figure between traditional and modern poets. He was famous for his lyrically rich language and wrote both lyrical prose and verse. Born to a couple stuck in an unhappy marriage, he had a difficult childhood and troubled relationships with his parents. His parents wanted the artistically-inclined youngster to join the military. However, Rainer Maria Rilke went on to study literature and philosophy before beginning his literary career. He mainly wrote in the German language and is best known for his contributions to German literature. He also wrote extensively in French, composing over 400 poems in the language. Translations of his works have been popular among English-language readers and he remains a well-known, best-selling poet in America. Even though he mostly wrote poetry, he published one semi-autobiographical novel during his lifetime. He traveled extensively to different countries in Europe, spending several years in Paris, where he developed a new style of lyrical poetry. He eventually settled in Switzerland in his later years. He was married to sculptor Clara Westhoff and had a child with her. He died at the age of 51 and his reputation continued to grow steadily even after his death. Bertha von Suttner
DID WE MISS SOMEONE?
CLICK HERE AND TELL US
WE'LL MAKE SURE
THEY'RE HERE A.S.A.P
Quick Facts

Rainer Maria Rilke was born to a German-speaking family in Prague, then part of the Austro-Hungarian empire, on December 4, 1875. His father, Josef Rilke, was a retired officer in the Austrian army. He later worked as a railroad official. His mother, Sophie ("Phia") Entz, was an ambitious woman who hailed from a well-to-do Prague family, the Entz-Kinzelbergers.

His parents had lost a baby girl before Rainer was born. His mother never got over the loss of her daughter and tried to raise her son like a girl. She made him wear “girls’ dresses” and treated him like a “doll.” His parents had a troubled marriage and later divorced.

He was artistically inclined from a young age, but his parents pressurized him into entering a military school. He thus attended the military academy in Sankt Pölten, Lower Austria, from 1886 until 1891, before he was forced to quit due to his ill health.

He then attended tuition classes to study for the university entrance examination and cleared the test in 1895. He then proceeded to study literature, art history, and philosophy. 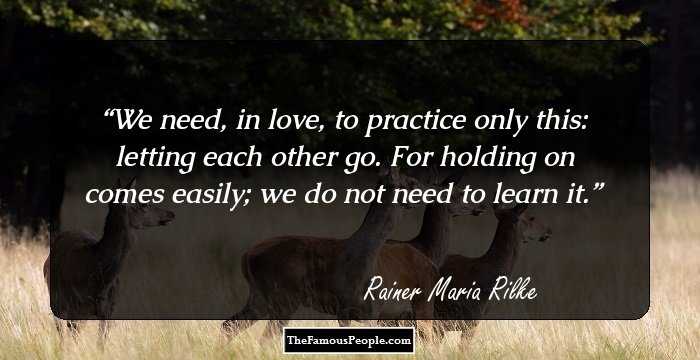 Rainer Maria Rilke started publishing his literary pieces in the 1890s. He published his first volume of poetry, Leben und Lieder (Life and Songs), in 1894. It was followed by Larenopfer (Offerings to the Lares, 1895) and Traumgekrönt (Dream-Crowned, 1897).

He also began his extensive travels in the 1890s. During one of his trips, he met the well-traveled writer Lou Andreas-Salomé and befriended her. She proved to be a strong influence in his life. He fell in love with her despite the fact she was already married.

Rilke went to Italy in 1898 and stayed there for several weeks. The next year, he accompanied Lou and her husband to Moscow. His trip to Russia was a highly productive one. He got the opportunity to meet Leo Tolstoy, whose influence is apparent in Rilke’s work Das Buch vom lieben Gott und anderes (Stories of God), published in 1900.

In 1900, Rainer Maria Rilke once again traveled to Russia with Lou. On this trip, he became acquainted with the family of future novelist Boris Pasternak and Spiridon Drozhzhin, a peasant poet. He translated Drozhzhin’s works into German.

He traveled to Paris in 1902, intending to write a monograph on the sculptor Auguste Rodin. The two men developed a cordial working relationship and Rilke became deeply influenced by Rodin’s works. He briefly acted as Rodin's secretary in 1905-06.

His writing career flourished during his stay in Paris. Some of the most important works he published during this period were Neue Gedichte (New Poems, 1907), Der Neuen Gedichte Anderer Teil (Another Part of the New Poems, 1908), and the two "Requiem" poems (1909). He also began working on his only novel, Die Aufzeichnungen des Malte Laurids Brigge (The Notebooks of Malte Laurids Brigge), in 1904; he would complete it January 1910.

He then moved to Ronda in Spain and stayed at Hotel Reina Victoria for a few months from December 1912 to February 1913. In 1912, he began working on a poem cycle called Duino Elegies; it would take him over a decade to complete it.

World War I broke out in 1914 when he was staying in Germany. His property in Paris was confiscated during the war and he was unable to return. He spent most of the war years in Munich.

Rainer Maria Rilke had to undertake mandatory basic training in Vienna in 1916. Before he could be forced to join the military, his influential friends had him transferred to the War Records Office, and he was discharged soon. He then returned to Munich.

He was much affected emotionally by the violence and chaos of the war. He supported the Russian Revolution in 1917 and also the Bavarian Soviet Republic in 1919. In 1919, he traveled to Switzerland from Munich.

In the early 1920s, he was finally able to complete Duino Elegies. During this period, he also wrote the poem cycle Sonnets to Orpheus containing 55 entire sonnets.

He began suffering from serious health problems in 1923 and had to frequently visit a sanatorium in Territet for his treatment. Despite his ill health, he continued to compose numerous poems in the years 1923-26. 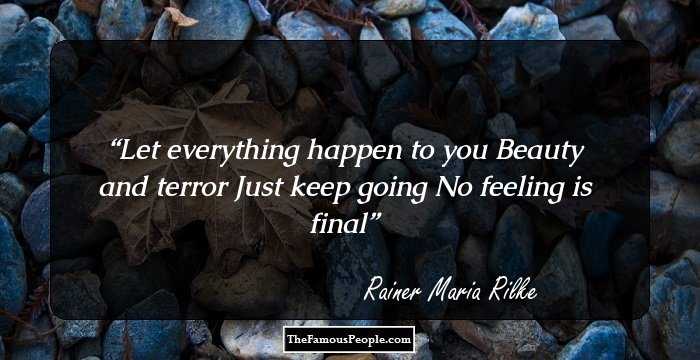 One of Rainer Maria Rilke’s best-known works is Duino Elegies, a collection of ten elegies written in the honor of Princess Marie von Thurn und Taxis. Comprising 859 lines in total, the poems are mystical and intensely religious.

His only novel, Die Aufzeichnungen des Malte Laurids Brigge (The Notebooks of Malte Laurids Brigge), was a semi-autobiographical work in which he addresses existential themes. This work was considerably influenced by the works of many other writers, including Nietzsche.

Rainer Maria Rilke met and fell in love with author and essayist Lou Andreas-Salomé in 1897. She was already married to Friedrich Carl Andreas at that time.

He married artist and sculptor Clara Westhoff in 1901. They had a daughter, Ruth. Even though the marriage was not a happy one, the couple was unable to procure a divorce due to religious restrictions as Rilke was Catholic.

He was involved in many extra-marital affairs. He was romantically involved with painter Lou Albert-Lasard from 1914 to 1916. In 1919, he met Polish-German painter Baladine Klossowska and began an affair with her.

Rainer Maria Rilke’s health began to decline in the mid-1920s. He was diagnosed with leukemia after suffering from ulcerous sores in his mouth and stomach problems. He died on December 29, 1926, at the age of 51. 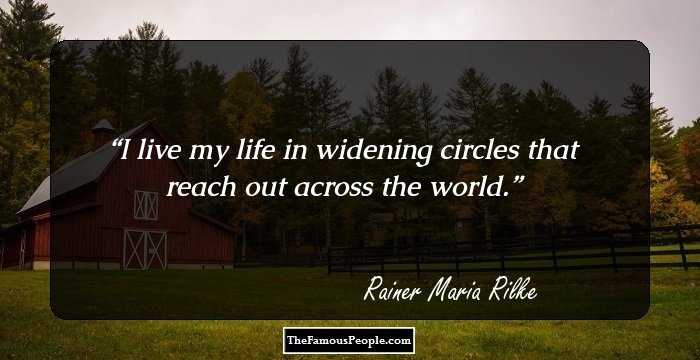