Rachel Carson was one of the pioneering modern environmentalists whose research papers and books have helped to create awareness about environmental pollution. The love for nature was instilled in Rachel by her mother when she was still a child. The young girl preferred to spend time among nature and wildlife. They had a big farm which was her constant source of learning about nature. When she grew up, she pursued her studies in zoology to enhance her knowledge about the environment. While she was a student Carson also engaged in part-time employment at the ‘U.S. Bureau of Fisheries’ to gain financial stability. Impressing her seniors, this knowledgeable and hardworking researcher soon earned a permanent position at the bureau. While working as a researcher, she also penned a few books. These books were based on her researches as a biologist and also advocated environmental safety. Some of these books concentrated on the marine world in particular and also the whole environment in general. She was against the use of pesticides and through her books, she wanted to make people aware of the aftermaths of using these chemicals and cited the extent to which human beings had already ruined the environment. Her books were highly appreciated and even won her a ‘National Book Award’.
Continue Reading Below American Celebrities
Biologists
Non-Fiction Writers
American Women
Women Writers
Childhood & Early Life
She was born on 27th May 1907, to Maria Frazier and Robert Warden Carson, in a place near Springdale, Pennsylvania. Her family had a large farm and she used to visit it and dwelled in nature.
She did her schooling from institutions in Pennsylvania before she joined the ‘Pennsylvania College for Women’ (now known as ‘Chatham College’) and completed her graduation in the year 1929. 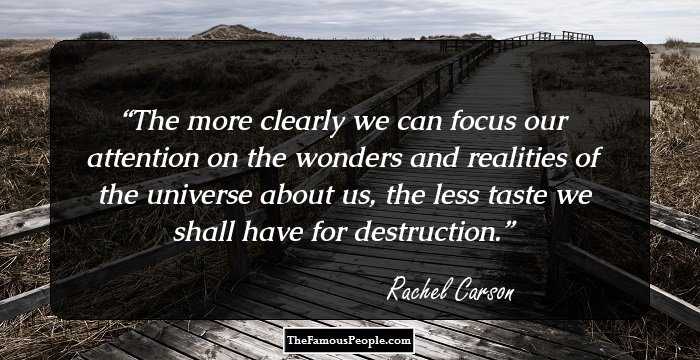 The Sexiest Men Of 2020, Ranked
Career
She worked as a faculty at the ‘University of Maryland’ for a span of five years and at the same time, even pursued her MA in zoology, from ‘Johns Hopkins University’ which she completed in 1932.
She joined the ‘U.S. Bureau of Fisheries’ (now known as ‘Fish and Wildlife Service’) in a temporary post and wrote scripts for radio program ‘Romance Under the Waters’, which helped her to gain some financial stability. She was also hired to write such scripts during the ‘Great Depression’.
In 1936, she was hired by the bureau for a permanent post as an aquatic biologist and she was engaged with the bureau for the next twenty-six years.
In 1937, she wrote an article for the monthly magazine ‘Atlantic’ entitled ‘Undersea’ about marine life.
In 1941, her first book about the marine world ‘Under the Sea-Wind’ was published and the vivid details and scientific information received applause from the readers.
In 1945, she led a writing team at the ‘Fish and Wildlife Service’ and the same year, she was introduced to the new pesticide called ‘DDT’ which eventually became the subject of her research.
She started working on her second book ‘The Sea Around Us’ in the year 1948, and decided to put all her time and concentration in writing. A year later, she was promoted to the position of Editor-in-Chief in the fisheries bureau, but she left the job after two years.
In 1951, her book ‘The Sea Around Us’ hit the book stores and it received an overwhelming response from the readers as well the critics. This book became a bestseller soon and granted her financial independence.
She came up with her third book ‘The Edge of the Sea’ in the year 1955, which was her third and final book in the trilogy about marine world. This book was also successful and was appreciated by the readers and also critically acclaimed.
Continue Reading Below
She was engaged in writing articles on various issues such as ‘Help Your Child to Wonder’, ‘Our Ever-Changing Shore’, and started working as a conservationist.
In 1962, one of her most important work ‘Silent Spring’ was published which warned people about the perils of environmental pollution. She did not advocate the use of pesticides as they are harmful to nature. Her book encompassed the extensive research she was involved with for many years before penning the book. 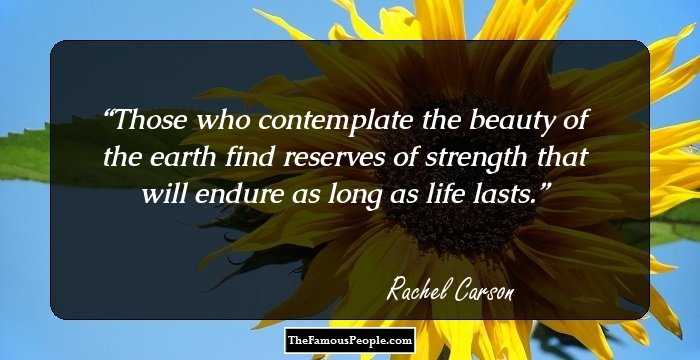 Quotes: Life, Will
Major Works
Her last authored book ‘Silent Spring’ is regarded as one of the finest scientific writings concerning the environment. Through this book she tried to focus public’s attention towards the dangers that the environment is subjected to. She warned people against the use of pesticides because they had adverse effects on the environment. This book was faced with much criticism citing the writer as a communist. However, the author did not live long to see how her book generated public consciousness and helped in the ‘Conservation Movement’.
Awards & Achievements
Her second book ‘The Sea Around Us’ won her a ‘National Book Award’ in the ‘Nonfiction’ category in the year 1952.
A documentary was made by director and producer Irwin Allen which was based on ‘The Sea Around Us’ and it won the ‘Oscar for Best Documentary’ in the year 1953.
She was posthumously honoured with the ‘Presidential medal of Freedom’ award by former President of America Jimmy Carter. 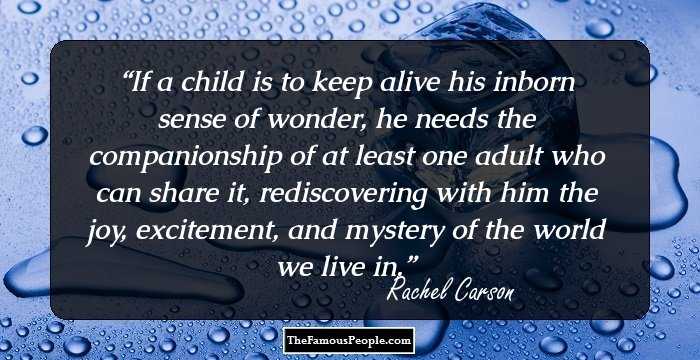 Personal Life & Legacy
She adopted the son of her niece named Roger Christie, after the death of Roger’s mother.
This writer suffered from many diseases before she died of a cardiac arrest on 14th April 1964 at her residence in Silver Spring, Maryland. Her body was cremated and a portion of the ashes were buried at the ‘Parklawn Memorial Cemetery’ in Rockville, in the resting place of her mother.
Her research papers and manuscripts have been handed over to the ‘Yale University’ so that the students can benefit from the works.
Her book ‘The Sense of Wonder’ came into print after the author’s death.
The book ‘Always, Rachel: The Letters of Rachel Carson and Dorothy Freeman’, was published in the 1990s, which is a collection of letters exchanged between Rachel and Dorothy. It provides an autobiographical view of Carson. This was followed by the book ‘Lost Woods: The Discovered Writing of Rachel Carson’.
A documentary entitled ‘The Power of One Voice: A 50-Year Perspective on the Life of Rachel Carson’ was made about this eminent environmentalist, her works and challenges. It features most of Carson’s close acquaintances such as her son Roger, Linda Lear and other notable scientists and writers.
Trivia
The famous biologist and researcher had a lifelong friendship with author Dorothy Freeman.
Recommended Lists:
Writers #162
You May Like

Quotes By Rachel Carson | Quote Of The Day | Top 100 Quotes

See the events in life of Rachel Carson in Chronological Order