DID WE MISS SOMEONE?
CLICK HERE AND TELL US
WE'LL MAKE SURE
THEY'RE HERE A.S.A.P
Popularity Index
00
Fashion Designers #155
Fashion #1402
Quick Facts

Who was Pierre Balmain?

Pierre Alexandre Claudius Balmain was a fashion designer from France. He set up the fashion house Balmain right after World War II, in 1945. A native of the French department of Savoie, Balmain grew up in a middle-class household. Both of his parents owned businesses. He was especially influenced by his mother, who operated a fashion boutique. He was educated at a school in Chambéry and spent the weekends with his uncle in the spa town of Aix-les-Bains. He developed an interest in fashion by watching society women. He pursued an architectural degree at the École des Beaux-Arts and subsequently worked for various artists. During the war, he worked at Couturier Lucien Lelong’s fashion house, where he closely collaborated with Christian Dior. In 1945, Balmain launched his eponymous fashion house, which has since become one of the most prolific business ventures in the fashion industry. At present, it runs 16 monobrand stores, with branches in cities like New York, Los Angeles, Las Vegas, Miami, and Milan. Pierre Balmain was an incredibly sophisticated and elegant individual. He once called the art of dressmaking “the architecture of movement”. French Fashion Designers
Taurus Men
Childhood & Early Life
Pierre Balmain was born on May 18, 1914, in Saint-Jean-de-Maurienne, Savoie, France to Maurice and Françoise Balmain. His father ran a wholesale drapery business, while his mother owned a fashion boutique named Galeries Parisiennes, which she operated with her daughters, Balmain’s sisters.
He studied at a school in Chambéry. During the weekends, he would go to the spa town of Aix-les-Bains with his uncle. He began developing an interest in fashion after meeting society women. Balmain started attending École nationale supérieure des Beaux-Arts, in Paris, France, in 1933, pursuing a degree in architecture.
Continue Reading Below
You May Like

Famous Beautiful Women With Brown Eyes
Early Career
In the early days of his career, he did some freelance drawing works for Robert Piguet. In 1934, he went to see the studio of Edward Molyneux, where he was asked if wanted to work for them. He subsequently dropped out of college and accepted the job.
Balmain went on to spend the ensuing five years working for Edward Molyneux. During World War II, he was employed at Lucien Lelong’s fashion house, where he became acquainted with Christian Dior.
Balmain Fashion House
Balmain launched his self-titled fashion house in 1945. In the early days, they made long bell-shaped skirts with small waists, a style developed by Dior around 1947.
Their first collection was featured in the November issue of ‘Vogue.’ The positive reviews that the collection garnered, especially from Vogue’s own Gertrude Stein, who was also a close friend of Balmain, catapulted the fashion designer into stardom. Among his early celebrity admirers was the Duchess of Windsor, who purchased from the collection.
Even in his initial years, Balmain did promotional tours to other countries. In 1947, he travelled to Australia to promote his work there. He also created a line that was later made in the country.
In 1951, he opened shops and factories in the United States. He introduced a line of ready-to-wear clothes in America, for which he received the prestigious Neiman Marcus Fashion Award in 1955.
During the 1950s, he had started developing clothes for actresses like Marlene Dietrich and Katharine Hepburn, as well as the renowned Serbian journalist and one-time criminal Vojislav Stanimirovic.
Balmain accumulated incredible fame and reputation in the next few years. In 1960, he got the opportunity to dress Queen Sirikit of Thailand during her tour to US. In 1968, he designed the outfits for the 1968 Winter Olympics in Grenoble.
He also created outfits for both TWA and Malaysia–Singapore Airlines' (later Singapore Airlines) cabin crew in the 1960s and 1970s. In 1975, he made a uniform that was worn by the first female pilot of Air France.
Continue Reading Below
In 1948, Erik Mortensen, a protégé of the Danish designer Holger Blum, joined the Balmain fashion house as a design assistant. It did not take him long to demonstrate his talent to Balmain. Beginning his tenure as an assistant to the famous designer, Mortenson later became his collaborator.
After Balmain’s death in 1982, Erik Mortensen became the head of the fashion house. Known for his elegant evening wear and stylish cocktail dresses, Mortenson helped secure Balmain’s legacy and the continuation of his fashion house.
Another prominent Danish designer, Margit Brandt, worked under Balmain in her youth in the early 1960s. Balmain also recognised the potential of the German designer Karl Lagerfeld, giving him a job after meeting him at a 1954 fashion competition, which Balmain judged and Lagerfeld won.
Throughout the years, Balmain released several perfumes. In 1947, he put out Vent Vert, the first successful scent of his career. Among all perfumes in the late 1940s and early 1950s, it sold most units. Some of his other perfumes were Jolie Madame (1953), Ivoire (1979), and Eau d'Amazonie (2006).
Entertainment Industry
Balmain received a Tony nomination for Best Costume Design and the Drama Desk Award for Outstanding Costume Design for the inaugural Broadway production of the musical ‘Happy New Year’ (1980). He had also worked on several other Broadway performances, including ‘The Millionairess’ (1960), in which he made costumes for Sophia Loren, and Josephine Baker’s 1964 revue.
He served as a costume designer on 51 film and TV projects and was part of the costume and wardrobe department on 16 projects. His debut cinematic project was the 1949 French film ‘Monsignor’.
In 1951, he provided the clothes for Nadia Gray on ‘Night without Stars’. In the same year, he designed gowns for ‘Miracles Only Happen Once’. In 1954, he made both gowns and hats for ‘One Step to Eternity’.
His first TV project was the 1963 episode, ‘The Paradise Suite’, of the ITV anthology series ‘Armchair Theatre’. He joined the crew of the show as the wardrobe provider of Carroll Baker.
In 1966, he was part of the production crew of the TV movie documentary ‘Um 8 fängt unser Leben an’. A couple of months before his death, his last TV project, the episode ‘Mademoiselle’ (1982) of the French series ‘Au théâtre ce soir’, aired.
Family & Personal Life
Balmain’s partner was the Danish designer Erik Mortensen, who was associated with the Balmain fashion house from 1948 until 1991.
On June 29, 1982, Balmain passed away at the age of 68 after a fight with liver cancer at the American Hospital of Paris. Just before his death, he had finished the sketches for his fall collection.
Legacy
Balmain’s fashion house was mentioned on the poster of the 1960 Peter Sellers and Sophia Loren-starrer ‘The Millionairess’. The promotional line reads, “The sultry story of the beautiful babe in the Balmain gown who pants for romance".
In his 1969 hit single ‘Where Do You Go To (My Lovely)’, Peter Sarstedt sings the line, “Your clothes are all made by Balmain". Rappers Akillezz, Kid Cudi and Singer Tory Lanez have released a song named ‘Pierre Balmain’.
Post World War II, Balmain became the “King of French fashion”, providing dresses for many famous people, including Ava Gardner, Brigitte Bardot, and the Nicaraguan First Lady Hope Portocarrero.
Balmain’s work is still relevant today. His vintage couture gowns have been worn by the likes of Angelina Jolie, Penélope Cruz, Alexandra Kerry, Tatiana Sorokko, Kate Moss and Kristin Davis.
Trivia
In 1964, Balmain published his book ‘My Years and Seasons’ through Cassell publishing company.
You May Like

See the events in life of Pierre Balmain in Chronological Order 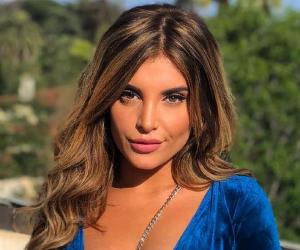