1st August In History
DID WE MISS SOMEONE?
CLICK HERE AND TELL US
WE'LL MAKE SURE
THEY'RE HERE A.S.A.P
Popularity Index
50
Fashion #682
Fashion Designers #76
Quick Facts

Who was Yves Saint Laurent?

Yves Henri Donat Matthieu Saint Laurent was an Algerian-French fashion designer who is one of the greatest and most celebrated icons of the fashion industry. World renowned since the age of 21 when he shot to fame as the savior of Christian Dior, he is credited with having introduced the tuxedo suit for women and was known for his use of non-European cultural references, and non-white models. Born and raised in colonial Algeria, he was taken in by Dior as an assistant while Yves was studying in Paris as a teenager. Addressed as a hero in France for saving the company after Dior's death, his world collapsed when he was conscripted into the French army and lost his job. At the time, his lover, Pierre Berge, came to his rescue and helped him to set up his own couture house. He opened his own fashion house and quickly emerged as one of the most influential designers in Paris. With an amazing business acumen, his firm dominated fashion throughout the 1960-70s, making him fabulously wealthy. But the pressures of fame and the commercial constraints of fashion took a toll on him. The charismatic young man fell prey to addiction and depression, retreating from the world to live as a recluse. As he withdrew, his financial affairs came under scrutiny, culminating in the sale of his empire to a state-controlled company. He was a renowned designer who changed the way women dress with a series of innovations which are now regarded as classics.
Recommended Lists: French Men
French Fashion Designers
Leo Men
Childhood & Early Life
He was born on August 1, 1936, in Oran, Algeria, to Charles Saint Laurent, a lawyer and insurance broker, and his wife, Lucienne Mathieu. He was the eldest child of the family with two younger sisters, Michèle and Brigitte.
From a young age, he was a nervous child and mostly remained sick. He had a keen interest in creating intricate paper dolls, and by his early teen years he was designing dresses for his mother and sisters.
After completing his secondary education in Algeria, he moved to Paris to pursue a career in designing theatrical costumes and women’s fashion. He attended fashion school at the Chambre Syndicale de la Haute Couture, for a short time and won first prize in an international design contest. 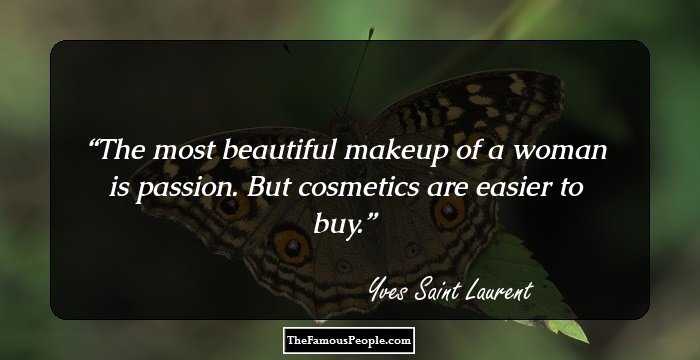 Who Is The Most Popular BTS Member?
Career
In Paris, he showed his drawings to Michel de Brunhoff, director of French ‘Vogue’ magazine, who published several of them immediately. Following a stint at fashion school, he was introduced to Christian Dior, a legendary fashion designer, who immediately offered him a job at his firm.
In 1957, he became the head designer of the House of Christian Dior S.A. After taking over as art director for Dior, he launched his first collection for the company, the Ligne Trapéze.
In 1960, he introduced the chic beatnik look of turtlenecks and black leather jackets edged with fur. The same year, he was conscripted to serve in the French Army during the Algerian War of Independence and lost his job at Dior.
His lover, Pierre Burge, came to his rescue and helped him set up his own fashion house, ‘Yves Saint Laurent’ (YSL) in 1962 with funds from J. Mack Robinson, an Atlanta millionaire.
In 1966, he introduced ‘Le Smoking’, his legendary smoking suit. His other innovations include the sheer blouse (1966), and the jumpsuit (1968). Throughout the years, he continued to design both the YSL haute couture and pret-a-porter collections, continuously refining his timeless, elegant designs for sophisticated women.
In October 1998, he showed his last ready-to-wear collection for the Rive Gauche label, which he had founded more than 30 years before.
In 2002, he did his last show and took his final bow in the fashion industry. 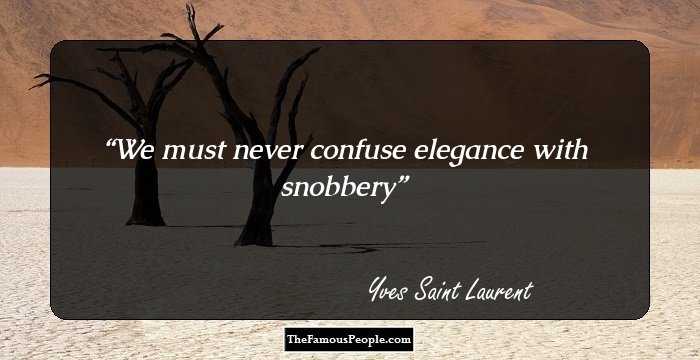 Quotes: Never
Major Works
His spring 1958 collection almost certainly saved the enterprise Christian Dior S.A from financial ruin; his creations, a softer version of Dior's New Look, catapulted him to international stardom with what would later be known as the "trapeze dress".
In the 1960s and 1970s, the firm popularized fashion trends such as the beatnik look; safari jackets for men and women; tight trousers; tall, thigh-high boots; and arguably the most famous classic tuxedo suit for women “Le Smoking”. By feminizing the basic shapes of the male wardrobe, YSL set new standards for world fashion.
Awards & Achievements
In 1983, he became the first living fashion designer to be honored by the Metropolitan Museum of Art with a solo exhibition.
In 2001, he was conferred with the rank of the ‘Commander of the Légion d'Honneur’ by French president Jacques Chirac.
In 2007, he was awarded the rank of the ‘Grand Officier de la Légion d'honneur’ by French President Nicolas Sarkozy. 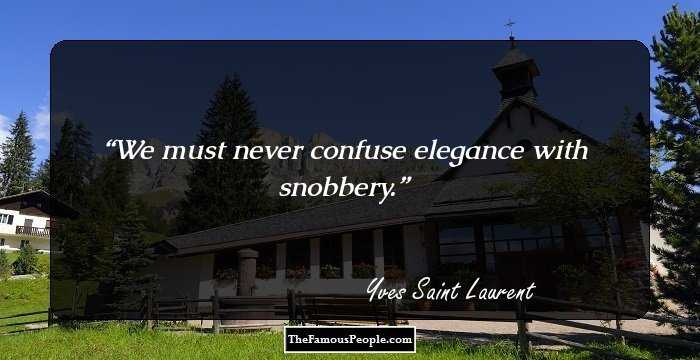 Quotes: Never
Personal Life & Legacy
He was involved in a romantic relationship with industrialist Pierre Bergé, with whom he also started their own fashion house. The couple split romantically in 1976 but remained business partners.
He died on June 1, 2008 of brain cancer at his residence in Paris, after a long illness. He received a Catholic funeral at St Roch Catholic Church in Paris and after cremation, his ashes were scattered in Marrakech, Morocco, in the Majorelle Garden.
You May Like