Advanced Search
Paul Revere was an American industrialist and a Patriot in the American Revolution, who devised an intelligence and alarm system to alert the Colonial militia of a British invasion. By profession, he was a silversmith and an engraver. His social position as a middle-class craftsman and his close contact with other social groups might have helped him in such matters. He also drew the attention of the public by various engravings such as the arrival of British troops in 1778, Boston Massacre of 1770 etc. Indeed, he was a successful propagandist and an organizer. At the same time, his activities were not limited to that alone. He also took active part in the Boston Tea Party that escalated the American Revolution. His mid night ride to Lexington on April 18, 1775 has been immortalized by Henry Wadsworth Longfellow’s poem, ‘Paul Revere’s Ride’. After the war, he went back to his profession and made a lot of money by producing articles of mass consumption. He then used the profit to set up a metal casting furnace and produce bronze bells, canons and copper bolts and spikes. Thus he became one of the early industrialists of the United States of America. Michael Flynn
DID WE MISS SOMEONE?
CLICK HERE AND TELL US
WE'LL MAKE SURE
THEY'RE HERE A.S.A.P
Quick Facts

American People
Male Leaders
Capricorn Leaders
American Leaders
American Military Leaders
Childhood & Early Life
Paul Revere was born on January 1, 1735 in Boston, USA. His father, Apollos Rivoire was a French migrant who, on reaching America, changed his name to more anglicized Revere. He had a goldsmith shop at North End in Boston. Paul’s mother, Deborah Hitchborn, came from a local artisan’s family. The couple had twelve children, of whom Paul was the third born.
Paul learnt his three R’s at the North Writing School. At the age of 12 he joined his father as an apprentice and learnt the art of silversmith. At the same time, he began to earn extra money by ringing bells at Old North Church.
Paul lost his father in 1754. At that time, he was only 19 year old. Although he inherited the shop he was legally too young to own it. Consequently, the family had to face financial hardship. Paul decided to join the army as it promised regular salary.
Paul Revere enlisted in the provincial army in February 1756 and was commissioned as a second lieutenant. By 1757, he came back to Boston and took control of his father’s shop in his own name. In 1760, he became a member of ‘Freemason’.
At that time there was a decline in the economy of Great Britain and it had a negative effect on his business. The Stamp Act of 1765 further deteriorated the situation. To make ends meet, he sometimes had to take up dentistry, a trade he had learnt from a practicing surgeon. However, he soon realized that things would even go down unless steps were taken to free the country from the British yoke. 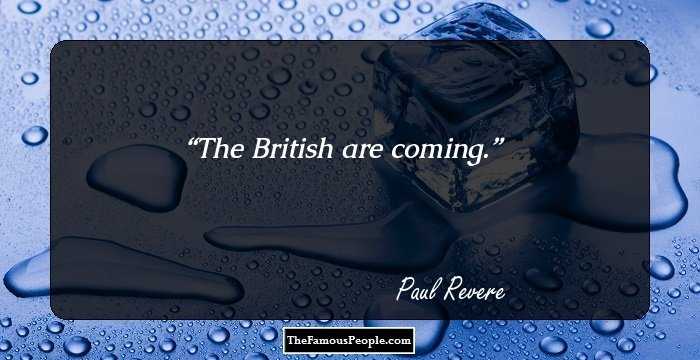 See the events in life of Paul Revere in Chronological Order