Advanced Search
Anthony Wayne was one of the important military generals and statesmen who contributed extensively in the American Revolution. During his lifetime, he served as the United States Army officer and member of the United States House of Representatives. Educated as a surveyor, he worked in the profile for a year before being called for military duties. He continuously moved up the rank in his military service during the American Revolution War, advancing from the position of a colonel to Brigadier General and Major general. Following his military duties, he took on a political profile and chose to represent as the Representative of Georgia’s 1st Congressional district. His political services did not last long and he was called back to the military, as he was made to lead an expedition in the Northwest Indian War. He played a crucial role in the war and helped in the United States' victory. Cause of Death: Stomach Ulcer

American People
American Men
University Of Pennsylvania
Male Leaders
Capricorn Leaders
Childhood & Early Life
Anthony Wayne was born to Isaac and Elizabeth Eddings Wayne in Chester County, Pennsylvania. He had four siblings.
Young Wayne received his formal education at his uncle’s private academy in Philadelphia, where he was trained as a surveyor. He then went to study at the College of Philadelphia but did not earn a degree.
For a year, in 1766, he worked at the lands in Nova Scotia owned by Benjamin Franklin and his associates surveying and helping make settlements. The following year, he returned to work in his father's tannery while continuing his work as a surveyor.
From 1774 to 1780, he served in the Pennsylvania legislature 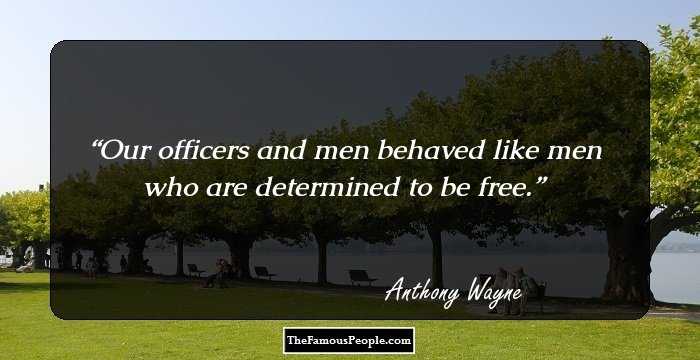 Quotes: Like
Continue Reading Below
Career
At the outset of the American Revolutionary War, he adopted a military career by raising a militia unit and the next year became a colonel of the 4th Pennsylvania Regiment.
His successful command at the battle of Trois-Rivieres led him to the rank of a brigadier general in February 1777. Following this, he commanded the Pennsylvania Line at Brandywine, where he held off General Wilhelm von Knyphausen to protect the American right flank.
Following his defeat in restricting the British, he led his forces yet again at the Battle of Germantown against the British. Though initial advances turned beneficial for the Americans and his camp, he was later on entrapped as the American forces had retreated.
In 1778, he led the American attack at the Battle of Monmouth. Despite being pinned by a superior British force, he held out until he was relieved by reinforcements sent by Washington. The following year, he commanded the Corps of Light Infantry.
In 1779, he and his men met with success, as his Corps of Light Infantry executed a successful attack on British positions. The victory earned him a medal. Following this in 1781, he served as commanding officer of the Pennsylvania Line of the Continental Army, which led to Pennsylvania Line Mutiny.
His role in leading the bayonet charges against the British forces helped him gain a reputation as a bold commander. He then moved southwards where he negotiated peace treaties with the Creek and the Cherokee for which he was promoted to the rank of a Major General in October 1783.
Following the war, he returned to Pennsylvania and took to politics. He served in state legislature for a year in 1784. Thereafter, he settled at a tract of land awarded to him in Georgia for his military duties.
For a year in 1791, he served as a US Representative of Georgia’s 1st Congressional district in the Second United States Congress. However, he lost his seat over residency qualifications following a report of electoral fraud. He then refused to run for re-election.
He was then recalled by President George Washington to lead an expedition in the Northwest Indian War, thus giving up on his civilian life. The Northwest Indian War was a disaster for the United States until then.
Continue Reading Below
He was given the command of a newly formed military force, ‘Legion of the United States’. For the same, he prepared a basic training facility at Legionville to prepare soldiers professionally. With this, he became the first to provide basic training for regular army recruits.
He then dispatched a force to Ohio to establish Fort Recovery as the base of operations. The fort then served as the base of the army, which continued to move northwards building strategically defensive forts ahead of the main force.
In 1794, narrowly escaping a tragic incident, he led his army which mounted an assault on the Indian confederacy at the Battle of Fallen Timbers, in Modern Ohio. The army achieved a decisive victory which resulted in the end of the war.
He negotiated the Treaty of Greenville between the tribal confederacy and the United States. According to the treaty, most of what is now Ohio was given to the United States thus making it easier for the state to enter the union in 1803. 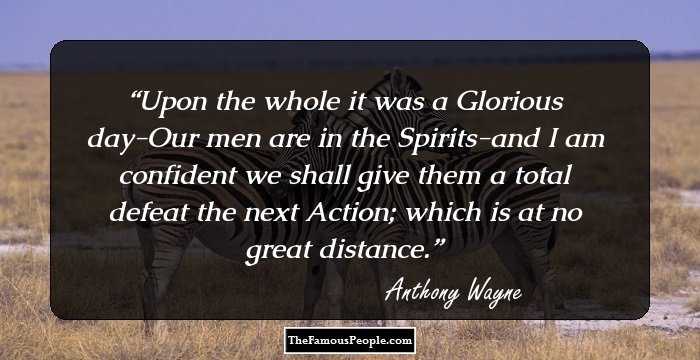 Personal Life & Legacy
In 1766, he tied the nuptial knot with Mary Penrose. The couple was blessed with two children, a daughter Margretta and son Isaac.
In 1796, he breathed his last due to complications from gout during a return trip to Pennsylvania. He was interred at Fort Presque Isle.
Later on, his son, Isaac Wayne disinterred his body and boiled it to remove the remaining flesh. The bones were then fitted in two saddlebags and were relocated to the family plot in St. David's Episcopal Church cemetery in Radnor, Pennsylvania. If legend is to be believed, ever year on his birthday, the ghost of Wayne wanders the highway searching for his lost bones.
The US Post Office issued a stamp in September 1929 in honour of General Wayne, which commemorated the 150th anniversary of the Battle of Fallen Timbers.
His legacy as a military officer and statesman has been kept alive. Many municipalities, institutions, boroughs, business and structures have been named after him. Additionally several cities, countries, communities, towns, forests, parks, rivers, schools and colleges, streets, highways and villages have been named after him.
His name finds a prominent place in American popular culture as well and has been the subject of novels, plays, sculptures and so on.

See the events in life of Anthony Wayne in Chronological Order