Virginia Patterson Hensley, popularly known as Patsy Cline, was a famous American country singer from Nashville, Texas. She was known for her rich and booming, emotionally charged voice that could give anyone goose bumps. She did not become a country music star in a day- she had to, in fact, work very hard to sustain her life and support her family members as she came from a middle-class background. Her love for singing was so huge that she taught music to herself by experience. After getting some popularity through sporadic performances on the local radio channels, Cline signed contracts with the big record companies like Four Star Records, Decca Records, etc. and found her way to the heart of country and pop music lovers through television, radio and stage shows. She was the first female country singer to have a crossover pop hit but unfortunately at the height of her singing career, Cline died in a tragic plane crash. Millions of records were sold after her death and she became the first female solo artist to be inducted into the Country Music Hall of Fame. Miley Cyrus
Country Singers #10
Singers #121
8th September In History
DID WE MISS SOMEONE?
CLICK HERE AND TELL US
WE'LL MAKE SURE
THEY'RE HERE A.S.A.P
Quick Facts

American Celebrities
Virgo Singers
Women Singers
American Singers
Female Country Singers
Childhood & Early Life
Patsy Cline was born in Winchester, Virginia, to Hilda Patterson Hensley and Sam Hensley. She belonged to a lower-middle class background as her father was a blacksmith and mother a seamstress. Her father left the family when Cline was only 15 years old.
She started singing from a very young age as her mother used to take her to church to sing with her. Everything that Cline knew about singing, she learnt on her own as she did not learn it professionally.
In order to support her family, Cline left school and took up menial jobs like working as a waitress. Since singing was one of her fortes, she requested the WINC-AM’s coordinator if she could sing on his show. 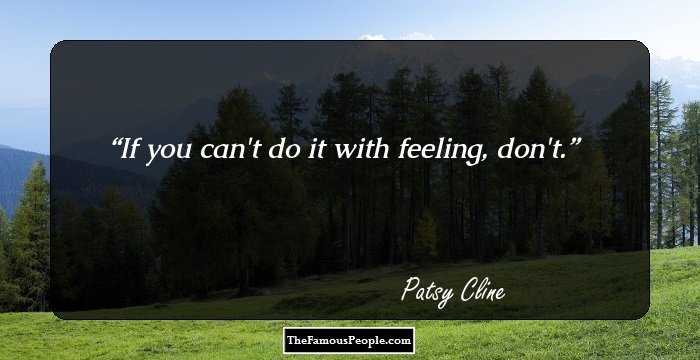 The Sexiest Men Of 2020, Ranked
Career
Jimmy McCoy, WINC-AM’s coordinator allowed Cline to sing on his show in 1947 and her performance was so well received that she was called back again. This was her ticket to the commencing stage performances at local nightclubs.
She expanded her musical exposure by performing in variety and talent shows locally, in Winchester and Tri-State areas along with her increased stints on the radio. In 1954, she became a regular on Connie B. Gay’s ‘Town and Country Jamboree’.
In 1955, owing to her increased popularity, Cline signed a contract with Four Star Records. According to the contract she could only sing compositions written by company’s writers, which eventually became creatively difficult to adjust with.
She started to experiment with genres, recording honky tonk material, trying her hand at rockabilly but nothing seemed to be working for Cline at the time. She also made her debut on television with ‘Grand Ole Opry’ on ABC-TV.
In 1957, she went through a turning point in her career when she appeared on ‘Arthur Godfrey’s Talent Scouts Show’ and by giving a wonderful performance with her new composition, ‘Walkin’ After Midnight’, she won the competition.
Through the early 1960s, Cline’s career started to take interesting turns as she was establishing herself in the country and pop music industry. She secured herself a role in the cast of the ‘Grand Ole Opry’ in Nashville, Tennessee.
She was now with Decca Records and released some of her greatest hits like, ‘I Fall to Pieces (1961)’. It peaked at number 20 on pop charts and one of her other hits, ‘Crazy’ was also released in the same year.
In 1962, Cline became a country pop queen with her legendary song, ‘She’s Got You’. It earned the number one spot on country charts. This success gave her an opportunity to join the tour of country-singer, Johnny Cash.
After this, she released a string of smaller country hits, including the Top 10 ‘When I Get Thru' With You’, ‘Imagine That’, ‘So Wrong’, and ‘Heartaches’. These were not really big hits but still considered as successful compilations.
Continue Reading Below
Cline appeared on Dick Clark's ‘American Bandstand’ and released her third album, ‘Sentimentally Yours’ in 1962. A month before her untimely demise, she was working on her fourth album, originally titled, ‘Faded Love’. 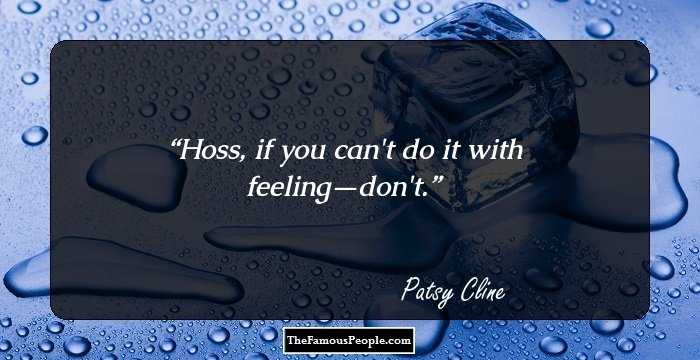 Quotes: You
Major Works
‘Walkin’ After Midnight’, recorded in 1956 is considered to be Cline’s prominent work. The Track peaked at No. 2 on country charts and No. 16 on pop and made her the first female country singer to have a crossover pop hit.
Personal Life & Legacy
Cline was married to Gerald Cline from 1953-1957. Their marriage did not work because she wanted to have a career in singing whereas he wanted her to be a housewife. The couple had no children.
She got married to a linotype operator, Charlie Dick, in 1957 and remained married to him until her death. The couple had two children together: Julie Dick and Randy Dick.
Cline met with a near-fatal accident in 1961, while she was travelling with her brother in a car around Nashville. She suffered from an uneven cut across her forehead, a broken wrist and a dislocated hip.
She died in 1963 in a plane crash in Camden, Tennessee, and was buried at Shenandoah Memorial Park in her hometown of Winchester, Virginia. Thousands of her fans attended her funeral.
Trivia
Cline, along with Cowboy Copas, Hawkshaw Hawkins and Randy Hughes, were headed to a performance when their plane crashed due to bad weather. Everyone on board died.
Her grave says, "Virginia H (Patsy) Cline 'Death Cannot Kill What Never Dies: Love'".
HBO released ‘Sweet Dreams: The Life and Times of Patsy Cline’, starring Jessica Lange in the lead role with Ed Harris and Ann Wedgeworth as her husband Charlie Dick and her mother Hilda Hensley in 1985. Lange was nominated for an Academy Award for her performance.

See the events in life of Patsy Cline in Chronological Order