The man who gave Americans the hit album ‘Mr. A-Z’ which sold over 100,000 copies, singer cum songwriter Jason Mraz is a person who loves music for music’s sake and not for the fame and fortune that follows. In fact he was so overwhelmed by the success of his album that he simply wanted to take a break and go away to some place where he could raise cats in peace! He did take a break and returned to the music scenario rejuvenated and even better than before! Known for his stirring and soulful music, he has till date released many best-selling albums that have achieved gold and platinum status not just in the US but also in several other countries. He is the winner of two Grammy Awards and also has several other prestigious awards to his name. Jason was interested in music and drama from a young age and thus enrolled at the American Musical and Dramatic Academy to study. However he dropped out and moved to San Diego to pursue his musical career. Initially he performed at a coffee house for some time before getting the chance to release his album. Once he started recording his albums, there was no stopping him! American People
Pop Singers
Country Singers
American Men
Virginia Musicians
Childhood & Early Life
He was born on 23 June 1977 to Tom Mraz and June in Virginia where he was raised. He is of Czech descent and his surname means “frost” in Czech. His parents divorced when he was a kid, but in spite of his broken family he had a comfortable childhood growing up in a safe and friendly neighborhood.
He attended Lee Davis High School where he was a cheerleader. After graduation he went to the American Musical and Dramatic Academy, New York where he studied for a few months.
He later enrolled at the Longwood University in Virginia but dropped out to pursue a career in music. 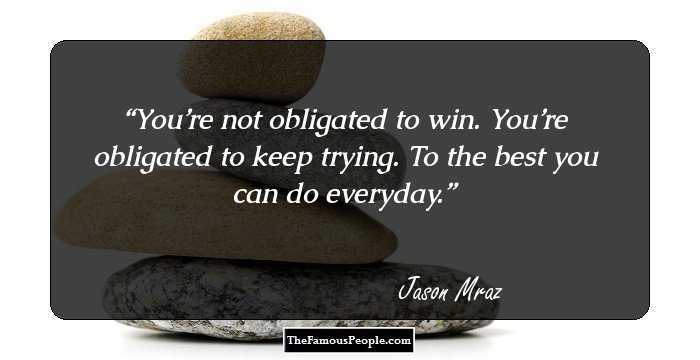 Quotes: You, Trying
Continue Reading Below
Career
He moved to San Diego in 1999 where he began performing for the band Elgin Park. Along with Toca Rivera he started performing at the coffee house Java Joe’s where he performed for three years building up a fan base.
He signed a contract with Elektra Records in 2002 and released his major label debut album ‘Waiting for My Rocket to Come”. The album reached No. 55 on the Billboard 200. Eventually the album went Platinum for selling a million units.
In 2003, he opened for Tracy Chapman at the Royal Albert Hall in London. In 2004, he went on a tour and while on the tour, he released a live album ‘Tonight, Not Again: Jason Mraz Live at the Eagles Ballroom.’
His second studio album, ‘Mr. A-Z’ was out in 2005. It was a moderate success and peaked at No. 5 on Billboards Top 200. It contained the songs ‘Life is Wonderful’ and ‘Geek in the Pink’.
He performed in Singapore in the annual Mosaic Music Festival in 2006. That year he toured all over the US and also went to the UK and Ireland to perform in other musical festivals.
In 2008, he released his album ‘We Sing, We Dance, We Steal Things’ which went on to become a super hit not only in the US but also in several other countries. Prior to its release Mraz had released three EPs with acoustic versions of the songs in the album.
Following the success of his album, he toured all over the world, performing concerts in different countries in Europe, Asia and Australia. He published the photographs from his tour in the form of a book titled, ‘A Thousand Things’ which was released in 2008.
His next album ‘Love is a Four Letter Word’ was out in 2012 and received favorable reviews. Its first single was the number ‘I Won’t Give Up’. The album debuted at No. 2 on the UK Albums Chart and No. 1 on the Canada Albums Chart.
Following his trend of touring after releasing an album, he performed shows at Hollywood Bowl, Los Angeles, and Madison Square Garden, New York, and O2 Arena, London.
His latest album is ‘Yes!’ which was out in July 2014. For this album he had collaborated with the members of indie-rock folk band Raining Jane who served as the backing band for him. 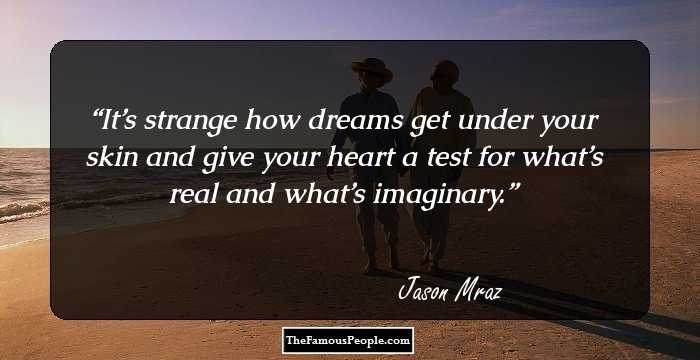 Quotes: Heart, Dreams
Major Works
His album, ‘We Sing, We Dance, We Steal Things’ is his most successful album so far. The album peaked at No. 3 in the Billboard 200 and spawned hits like ‘Make it Mine’ and ‘I’m Yours’.
Awards & Achievements
He won two Grammy Awards in the year 2010. One for Best Pop Collaboration with Vocals for ‘Lucky’ and another for Best Male Pop Vocal Performance for ‘Make it Mine’.
He was presented the People's Choice Award for Pop Male Artist in 2013. 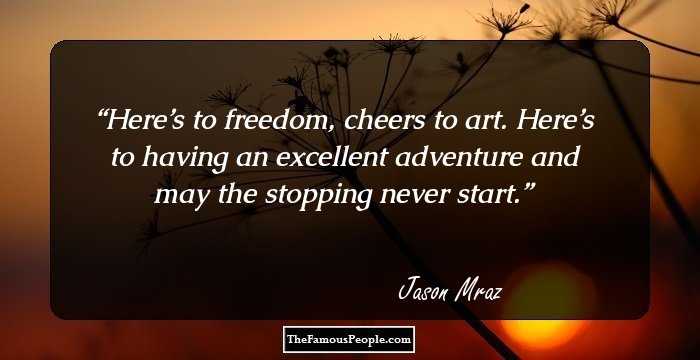 Quotes: Never, Art
Personal Life & Legacy
He was once engaged to singer-songwriter Tristan Prettyman but later broke off the engagement.
He is a vegan and claims that his food choices have influenced his music. He is actively involved with a number of social issues like environment, human rights, LGBT equality, etc. He established the Jason Mraz Foundation in 2011 with an aim to support charities working for human equality, environment preservation and education.

See the events in life of Jason Mraz in Chronological Order