Amanda Leigh Moore, better known as Mandy Moore is a much loved singer and actress who rose to stardom with her debut single ‘Candy’ which made it to the Billboard Hot 100. She loved singing from her childhood and had performed the National Anthem at several events around her hometown. The experience of watching the musical ‘Oklahoma!’ made her realize that she wanted to be a singer. She was just fourteen when someone who knew her helped her sign a contract with Sony Music and thus the teenager’s first record ‘So Real’ was released. Having entered the music industry while still at school she opted to withdraw from school and continue her education through correspondence. Since she became a singing sensation as a teenager, she was often compared with other teen idols like Britney Spears and Christina Aguilera. Her single ‘I Wanna Be With You’ became her first Top 20 hit on the Pop Songs chart. At the start of her career, she was often criticized for her ‘Bubblegum Pop’ sound though she gradually began incorporating a classier and sweeter sound into her music. After a successful beginning as a singer, the pretty young woman forayed into acting and became famous with her first starring role in the film ‘A Walk to Remember’. She appered in 'This Is Us' from 2016-2022, for which she bagged in two 'Screen Actors Guild Awards,' for 'Outstanding Performance by an Ensemble in Drama Series. In 2019, she also earned a star on the 'Hollywood Walk of Fame.' Blake Lively
10th April In History
DID WE MISS SOMEONE?
CLICK HERE AND TELL US
WE'LL MAKE SURE
THEY'RE HERE A.S.A.P
Quick Facts

Mandy Moore was born to Stacy, a former news reporter and her husband, Donald Moore, a pilot with the American Airlines on April 10, 1984. She is of mixed descent, and has two brothers.

Her grandmother was a dancer and the young Mandy was greatly inspired by her. She realized her interest in acting and dancing early on and requested her parents to enroll her in acting and singing classes.
As a young girl she used to perform the National Anthem at numerous events around her hometown. Even though she was very talented she was very quiet and sweet.

She started recording in the studio by herself when she was just thirteen. An acquaintance having a friend who worked for Sony Music Entertainment happened to hear her and helped her sign a contract with the Epic record label under the Sony banner. 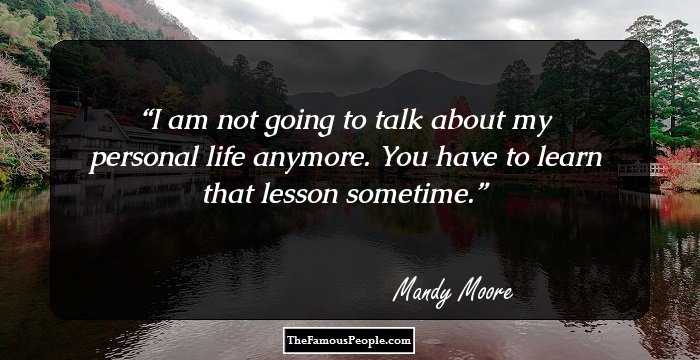 Quotes: You, Life, I
Continue Reading Below
Career
Since she entered the music world while she was still at school she dropped out and continued her education through private tutoring. She accompanied the pop band ‘N Sync on their concert tour through North America in early 1999. The same year she also toured with the Backstreet Boys.
Her debut single ‘Candy’ was out in August 1999. It reached the Billboard Hot 100 list and was a big commercial hit in various countries and was the most successful in Australia.
Mandy released her debut album ‘So Real’ in December 1999. The album received mixed critical reviews though it eventually became a commercial success with a sales figure exceeding one million copies in the U.S. alone.
Her second album ‘I Wanna Be With You’ was out in 2000. This album which consisted of new songs as well as remixes from her previous album was the international version of her debut ‘So Real’ which was released only in a few countries.
In 2001, she released her self-titled album ‘Mandy Moore’. It featured a sound that departed from the bubblegum pop sound she had been associated with so far. It was more inclined towards R&B and pop rock.
She made her foray into acting and one of her initial films was ‘Princess Diaries’ (2001) in which she played Lana Thomas, a pretty but cruel cheerleader. The movie was a big commercial hit.

Her first starring role as an actress was in the film ‘A Walk to Remember’ in 2002. She was paired opposite Shane West in the coming-of-age teen romance which was a huge box office grosser.

She played Hilary Faye in the teen comedy drama ‘Saved!’ in 2004. The film deals with topics such as religion, homophobia, teen pregnancy, divorce, ostracism, etc.
In 2007, she brought out the album ‘Wild Hope’ which was her first in four years. She claimed that she dealt with her depression issues through this album and that it helped her embark on a path of self-discovery.

Her album ‘Mandy Moore’ is her most successful ever. She was just seventeen years old when the album was released and she had worked hard to depart from the bubblegum pop sound of her previous albums. The album was accredited gold in the U.S. and multi-platinum in the Philippines.

Awards & Achievements
She won the Young Hollywood Award in the category Superstar of Tomorrow – Female for the film ‘A Walk to Remember’ in 2002.
She won the Grammy Award for Best Song Written for Visual Media for the song ‘I See The Light’ in 2011.
Personal Life & Legacy

In 2009, Mandy Moore got married to musician Ryan Adams. In 2014, the couple parted ways. She started dating musician Taylor Goldsmith in 2015. The couple got married on November 18, 2018. In February 2021, their son August Harrison was born. In June 2022, Moore and Goldsmith announced that they were expecting their second child together. In October 2022, their son named Oscar Bennett Goldsmith was born.

Trivia
When young, this popular singer and actress was nicknamed "The National Anthem Girl".
She was named one of the 50 Most Beautiful People by People Magazine in 2002.

See the events in life of Mandy Moore in Chronological Order