(Founding Father of the United States)

Advanced Search
Patrick Henry, one of the Founding Fathers of the United States of America, was a great orator, a successful lawyer, respected statesman and a planter. He began his career as a lawyer and made his name while appearing in the Parson’s Cause trial in early 1760s. Within two years, he was elected to the House of Burgesses, where he successfully steered the Virginia Stamp Act Resolutions. Soon, he became known for his radical opposition to the British governance. That he could communicate his political ideologies in a language that the common people could understand earned him great distinction. However, he is best remembered for the speech he gave at the Virginia Convention, where he urged his fellow delegates to join the war of independence in strong but passionate terms. Later, he was appointed a colonel of the 1st Virginia Regiment and then the first post colonial Governor of Virginia. Initially he opposed the United States Constitution because he believed that the rights of the States as well as the freedom of individuals were not addressed in it, but later supported President John Adams and became instrumental in the adoption of the Bill of Rights. Cause of Death: Intussusception

Founder/Co-Founder: Fathers of the United States of America

American People
Political Leaders
American Men
Male Leaders
Gemini Leaders
Childhood & Early Years
Patrick Henry was born on May 29 1736 at their family farm Studley, located in the village of Studley in Hanover County, Virginia. His father, John Henry, was a Scottish emigrant from Aberdeenshire, where he attended King’s College. In Hanover, he served as a surveyor, a colonel, a justice at the county court.
Patrick’s mother, Sarah Winston Syme, was from a prominent Hanover County family of English ancestry. She was first married to John Syme, who built and owned Studley. After his death, she married John Henry and the couple continued living at Studley.
Patrick was born second of his parents’ nine children. Although initially he went to a local school he was mostly taught at home by his father. His uncle, an Anglican priest, also provided instructions. Many believe that he inherited his great oratory skill from him.
When he turned fifteen, he started running a store for his father; but the venture soon turned unprofitable. In 1754 he married Sarah Shelton and on receiving 300 acres of farm land and six slaves as dowry he began tobacco farming.
For three years, Patrick Henry labored with the slaves on the land; but unfortunately, this time too success eluded him. In 1757, their main house was also destroyed in a fire. Thereafter, he started working in his father-in-law’s tavern.
By this time, he had a growing family to look after and the resources were insufficient. To bridge the gap, he decided to study law. In 1760, he was admitted to the bar and within a few years developed a large and profitable clientele. 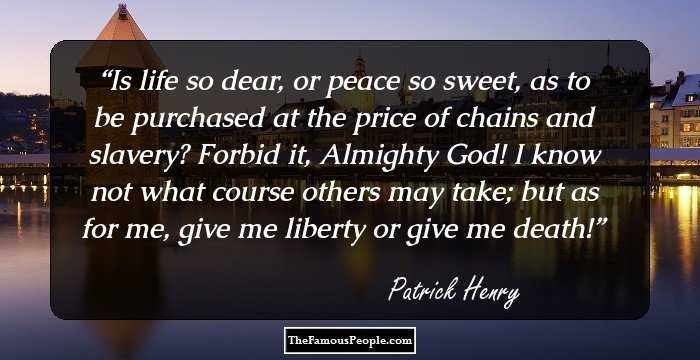 Quotes: Life, Me, Peace, I
Continue Reading Below
Career
Patrick Henry first came to the limelight in 1763 when he was asked to appear in the ‘Parson’s Cause’ trial on behalf of Louisa County. It was related to the ‘Two Penny Act’, passed by Virginia colonial legislature in 1758, but later vetoed by the British monarch.
The act had fixed the salaries payable to the clerics at two penny per pound of tobacco, thus reducing their income. Therefore, once the law was vetoed, the clerics sued the County for back pay and won. Henry defended the County against the clerics’ claim.
He gave an impassionate speech, in which he denounced the clerics, who challenged the law, as the enemy of the people and urged the jury to award them the lowest possible amount. He also declared that the king, “by disallowing Acts of this salutary nature” had forfeited his right to be obeyed.
While arguing the case, he also invocated the theory of ‘natural rights’. It impressed the jury so much that they took only five minutes to decide on one-penny damage.
The trial made him quite famous and in 1765, he was elected to the House of Burgesses, which was the legislative assembly of Virginia colony. Within nine days of taking the oath, he introduced the revolutionary ‘Virginia Stamp Act Resolutions’.
It was related to the Stamp Act of 1765, passed by the British Parliament. The act put a direct tax on all printed matters in America, which was resented by the colonists. However, some conservative representatives were not against it.
Therefore, Henry waited till most conservative representatives were away from the House and then tabled the resolution. When the conservatives came to know about it, they tried to strike it down; but could not due to vehement opposition from Henry’s followers.
Later, he gave an eloquent speech at the House, basing his argument on the fact that according to British conventions, people had the right to be taxed only by their own representatives; therefore British Parliament did not have any right to impose any tax on the colonists.
Ultimately, five of the six resolutions proposed by Henry were accepted. Moreover, his speech, printed and distributed among the public, gave rise to a discontentment against the British rule.
Continue Reading Below
In March 1773, Henry along with Thomas Jefferson and Richard Henry Lee moved a resolution in the Virginia House of Burgesses aiming to formulate a standing Committee of Correspondents. It had two-fold aims; to provide colonial leadership and also help in inter-colonial cooperation.
When the First Committeeof Correspondents was formed, Henry was inducted as one of its members. Eventually other colonies formed their own committees, leading to the formation of Continental Congress. Henry was elected as a delegate to its 1774 and 1775 sessions.
Meanwhile in 1774, the House of Burgesses was dissolved by Royal Governor Lord Dunmore. Thereafter, the convention began to serve as a revolutionary provisional government and held in secret. However, the members were not yet sure if they should mobilize military force to meet the increasing British military actions.
The dilemma was settled at the Second Virginia Convention, held in the Saint John’s Church in Richmond on March 23, 1775. Patrick Henry forcefully argued in favor of military solution and ended his speech with those famous words, “Give me liberty or give me death”.
On April 20, 1775, when the Royal Governor of the Colony of Virginia, ordered the removal of the gunpowder from the magazine in Williamsburg, Henry led a small militia to recover the gunpowder. The incident enhanced his reputation and in August 1775, he was commissioned as colonel of the 1st Virginia Regiment.
Alongside, Henry also put his mind to constructive works. In early November, 1775 he became one the founding trustees of Hampden–Sydney College, a position he held until his death.
On February 28, 1776, he resigned from his post of colonel because the Commission of Safety was trying to curb his power. By now, he had also realized that he was not suited for such jobs.
Instead, as a member of the Virginia Convention of 1776 he played a major role in drafting the first constitution for the state. Later in the same year, as Virginia became independent of British rule, Henry was elected by the state legislature as the first post colonial Governor.
The appointment was for one-year term only, but he was reelected twice and thus served until 1779. During his period, he gave General George Washington the required support in his war against the British.
Continue Reading Below
Since the law of the land barred him from being appointed to the post of Governor for more than three consecutive terms, he served as a member of the Virginia Assembly from 1780 to 1784. During this period he invested in land and began cultivating tobacco.
In 1784, he was reelected as the governor of the state for the second time and served in that capacity till 1786. During his period, he authorized the expedition to invade the Illinois country. In 1787, he was invited to attend the Constitutional Convention taking place in Philadelphia, but refused.
Henry supported the rights of the states and feared that the untested presidential form of government may give rise to monarchy. Therefore, he argued against ratifying the US Constitution in the 1788 Virginia Convention because it gave too much power to the Federal Government and did not mention the Bill of Rights.
He reconciled only after the passage of the Bill of Rights and thus became instrumental in having it included in the Federal Constitution. Thereafter, he continued serving the state. Finally, in 1794, he retired to his plantation at Red Hill near Brookneal and concentrated on his legal practice once more.
He was offered many top posts by the Federal government, but he refused most of them because of ill health and family responsibilities. In 1799, Henry agreed to run again for the state legislature because he wished to oppose the Kentucky and Virginia resolutions, but died before he could take his seat. 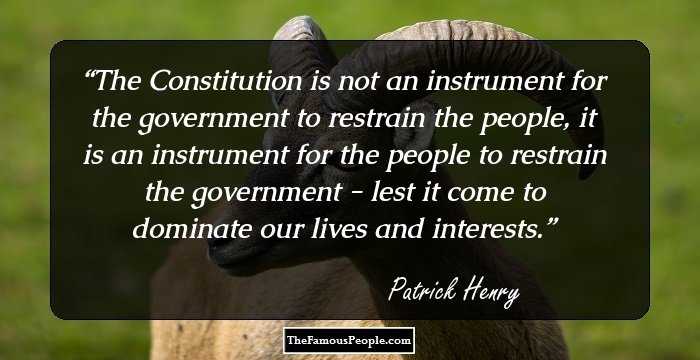 Major Works
Although Henry is known as a major figure in the American War of Independence, he is best remembered for the speech he gave to the Virginia Convention on March 23, 1775. It is believed it was his speech which swung the mood of the delegates in favor of joining the war.
Personal Life & Legacy
In 1754, Patrick Henry married Sarah Shelton, with whom he had six children. Unfortunately, by 1771, Sarah had become mentally ill and her health deteriorated very quickly. Henry looked after her as much as he could, bathing and feeding her until her death in 1775.
On October 25, 1777, he married Dorothea Dandridge, who was then twenty-two years old while he was forty-one. The couple had eleven children.
Patrick Henry died from stomach cancer at his Red Hill Plantation on June 6, 1799.
Today, places associated with his life have been honored with monuments and his Scotchtown plantation is now a National Historic Landmark. Many places, schools and ships have also been named after him. 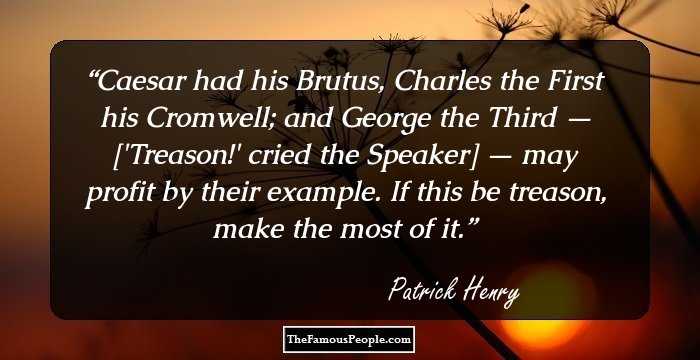 Quotes By Patrick Henry | Quote Of The Day | Top 100 Quotes

See the events in life of Patrick Henry in Chronological Order