Patrick Dempsey is a popular American actor and television icon. A role model for many, Dempsey has portrayed various roles throughout his career but is best-known for his role as the charming neurosurgeon ‘Dr. Derek Shepherd’ in the hit medical drama series ‘Grey’s Anatomy.’ Not many of his fans may know that he initially started out as a magician, touring different places, before establishing an acting career. During his early years as an actor, he was known for his good looks and lover-boy image in rom-coms, such as ‘Heaven Help Us,’ ‘Loverboy,’ and ‘Can’t Buy Me Love.’ He appeared in a number of award-winning shows, including ‘Once & Again’ before he took up the role of a neurosurgeon in one of the most highly-rated shows on television. In addition to his work in ‘Grey’s Anatomy,’ he has also starred in a number of critically-acclaimed films, including ‘Freedom Writers,’ ‘Enchanted,’ ‘Sweet Home Alabama,’ ‘Scream 3,’ ‘Made of Honor,’ ‘Transformers,’ and ‘Bridget Jones’s Baby.’ Apart from being an actor, he was also the co-owner of the ‘Vision Racing Indycar Series’ team and is the current owner of ‘Dempsey Racing.’ Gaten Matarazzo
Actors #312
Film & Theater Personalities #632
Continue Reading Below
DID WE MISS SOMEONE?
CLICK HERE AND TELL US
WE'LL MAKE SURE
THEY'RE HERE A.S.A.P
Quick Facts

Patrick Galen Dempsey was born on 13 January 1966, in Lewiston, Maine, USA, to Amanda and William Dempsey. His father was an insurance salesman and his mother was a school clerk.

He studied at ‘St. Dominic Regional High School.’ At the age of 12, he was diagnosed with dyslexia. It was around this time that Dempsey is believed to have been the most insecure.

From a very young age, he was adept at juggling. He even won a national juggling competition. He was also an accomplished skier. When he was in high school, he won the Maine state slalom championship. 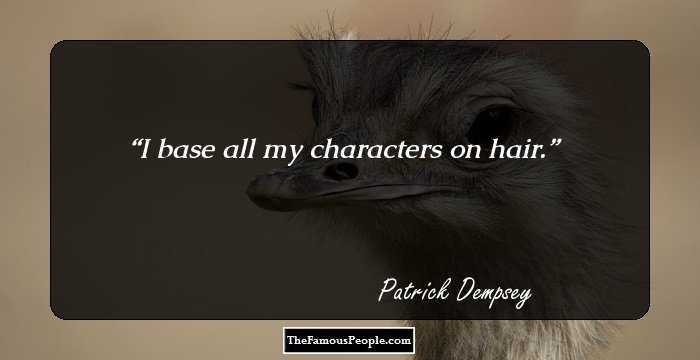 He left high school to pursue acting and landed the role of ‘David’ in the San Francisco production of ‘Torch Song Trilogy.’ He performed in several plays, including ‘Brighton Beach Memoirs’ and ‘The Subject was Roses.’

In 1985, he starred in ‘Heaven Help Us,’ a romantic film, followed by ‘Meatballs III: Summer Job’ the next year. He was also seen on television in ‘A Fighting Choice’ and ‘Fast Times.’

He landed his first major role in the 1987 movie ‘In the Mood.’ The same year, he also starred in the romantic film ‘Can’t Buy Me Love,’ which cemented his lover-boy image.

In 1989, he was cast as a pizza delivery driver who supplies ‘more than just pizzas’ in the romantic comedy ‘Loverboy.’ By now, he had become a heartthrob with many female fans. He was also cast as ‘Christopher Wooden’ in ‘Happy Together’ along with Helen Slater.

1991 proved to be an extremely busy year for the actor as he had a number of projects under his belt. He appeared in ‘Mobsters’ and ‘Run,’ two films that proved his versatility in acting. Two years later, he played a young John F. Kennedy in a two-part TV mini-series titled ‘JFK: Reckless Youth.’

In 2000, he appeared as ‘Detective Kincaid’ in ‘Scream 3,’ the third installment of the ‘Scream’ series. The same year, he landed his first major role in television when he was cast to play ‘Mathew’ in ‘Will and Grace.’ He then went on to play ‘Aaron Brooks’ in ‘Once and Again.’

He followed this with a critically-acclaimed performance in the hit film ‘Sweet Home Alabama’ in 2002. Two years later, he was seen in the television movie ‘Iron Jawed Angels.’ He was also seen in the TV series ‘The Practice.’

2005 turned out to be a good year for Dempsey as he landed his breakthrough role of ‘Dr. Derek Shepherd’ in the hit American medical drama series ‘Grey’s Anatomy.’ He became a star overnight and his fan-base expanded.

In 2009, he starred in the spin-off of ‘Grey’s Anatomy’ titled ‘Private Practice’ as ‘Dr. Derek Shepherd.’

He was cast in a supporting role in ‘Transformer: Dark of the Moon’ in 2011. The same year, he produced and appeared in ‘Flypaper’ alongside Ashley Judd. In 2013, he appeared as himself in the Dutch movie ‘Ushi Must Marry.’

Following his departure from ‘Grey’s Anatomy’ in 2015, he appeared in the blockbuster hit romantic comedy ‘Bridget Jones’s Baby’ in 2016.

In 2017, he starred in the short movie ‘Red Nose Day Actually’ and followed it up with a mini-series titled ‘The Truth About the Harry Quebert Affair’ where he played the titular role.

The talented actor started portraying the role of ‘Dominic Morgan’ in the TV drama series ‘Devils.’ The series is based on Guido Maria Brera’s novel of the same name. 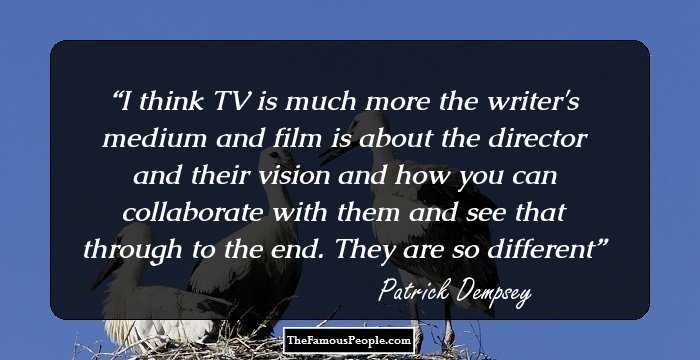 ‘Grey’s Anatomy’ is a popular American medical drama series which featured Dempsey in the lead role of ‘Dr. Derek Shepherd,’ the irresistible neurosurgeon. Patrick Dempsey was part of the series for 11 seasons and received a number of prestigious awards and nominations for his performance. He was also praised for his screen presence and acting skills.

He won the ‘Screen Actors Guild Award’ for ‘Outstanding Performance by an Ensemble in a Drama Series’ along with his co-stars for ‘Grey’s Anatomy’ in 2006 and 2007. 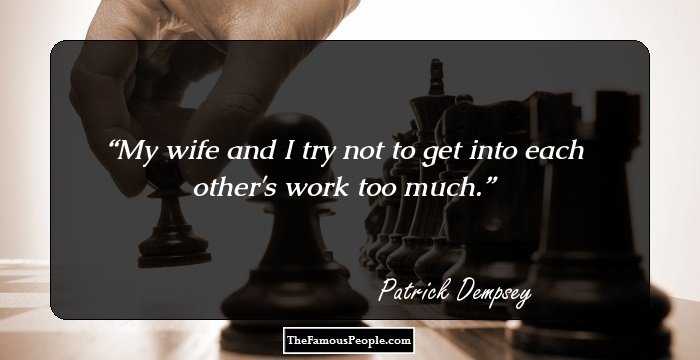 He married Rochelle ‘Rocky’ Parker, an actress, acting coach, and mother of his best friend, in 1987. She was 26 years his senior. The couple divorced in 1994.

In 1999, he married Jillian Fink, with whom he has three children: Tallulah Fyfe and twins Sullivan Patrick and Darby Galen. The couple separated for a year in 2015 and also filed for divorce. However, they got back together the following year.

He initiated the ‘Patrick Dempsey Center,’ a cancer center, at ‘Central Maine Medical Center.’ The inspiration for starting this organization came after his mother was diagnosed with ovarian cancer. She suffered nearly five relapses in her life.

This famous American television and film actor owns limited-edition sports and vintage cars. He is also an avid auto-racer. He even expressed his interest to compete in auto-racing full-time. He was seen in pro-am events, including ‘24 Hours of Le Mans,’ ‘Rolex 24 at Daytona sports car race,’ and ‘Baja 1000 off-road race.’

Quotes By Patrick Dempsey | Quote Of The Day | Top 100 Quotes

See the events in life of Patrick Dempsey in Chronological Order