Sir P. G. Wodehouse was an English satirist, author and a comic novelist who created the famous fictional characters of Bertie Wooster and Reginald Jeeves. In his unusual 73 years long career, P. G. Wodehouse wrote 15 plays and 250 lyrics for over 30 musical comedies and earned praise as a Master of parody and English prose. He witnessed an enormous success for his works such as The Inimitable Jeeves, Carry on Jeeves, Right Ho Jeeves and still continues to be read worldwide. He also worked as a playwright and lyricist, writing lyrics for numerous songs, including the same for the hit song Bill in Snow Boat. A number of his plays, including A Damsel in Distress and The Girl On The Boat have made it to the silver screen and have been adopted in to film. After Second World War, P. G. Wodehouse took a permanent residence in the United States following a controversy in Britain, and a threat of prosecution, for his broadcasting over German radio during Second World War.

C. S. Lewis
DID WE MISS SOMEONE?
CLICK HERE AND TELL US
WE'LL MAKE SURE
THEY'RE HERE A.S.A.P
Quick Facts

Pelham Grenville Wodehouse was born on 15 October 1881 in Guildford, Surrey. At the time of his birth, his father, Henry Ernest Wodehouse, was employed as a judge in the British colony of Hong Kong while his mother, Eleanor née Deane, had gone to Guilford to visit her sister.

Nicknamed Plum, he was born third among his parents’ four sons; he had had two elder brothers named Peveril and Armile and a younger brother named Richard. For the first two years of his life, he was raised in Hong Kong by a Chinese nanny and had little interaction with his parents.

When P. G. Wodehouse was three years old, his parents took the children to England so that they could have English education.  There they settled them in a house close to their maternal grandparents’ home, appointing an English nanny to take care of them, returning to Hong Kong shortly after that.

Fortunately, their nanny, Emma Roper, was a good person; strict but not heartless. With her, P. G. Wodehouse had more or less a happy childhood. Nonetheless, deprived from parental love and care, he created an imaginary world of his own. It also made him avoid emotional contract later in his life.

In 1886, P. G. Wodehouse was enrolled in dame-school in Croydon. Three years later the brothers were enrolled at the Elizabeth College in the island of Guernsey, studying there till 1891, spending the holidays with their aunts and uncles. Later, P. G. Wodehouse depicted many of them in his novels and stories.

As his father had planned naval career for P. G. Wodehouse, he was moved to Malvern House Preparatory School in 1981. It was meant for training students for naval academy and Pelham hated its narrow curriculum and overemphasis on discipline, presenting a humorous picture of it in many of his future novels.

Fortunately, he had weak eyesight and therefore in 1894, he was taken out of Malvern House to be admitted at Dulwich College, where his elder brother Armine was studying. Pelham loved his life there, and was greatly influenced greatly by Arthur Herman Gilkes, the then headmaster and a noted classist.

Although not very diligent, he was a good student, distinguishing himself in cricket, rugby and boxing. He was also a good singer and regularly participated in school concerts. In his senior classes, he became one of the editors of the school magazine. He had by then started writing.

In 1900, he graduated from school. By then, his father had retired from service and his pension, paid in rupee, was not adequate for supporting his college education. Therefore, while P. G. Wodehouse had hoped to continue his education at the Oxford University,  he couldn’t thwarted because of lack of funds. 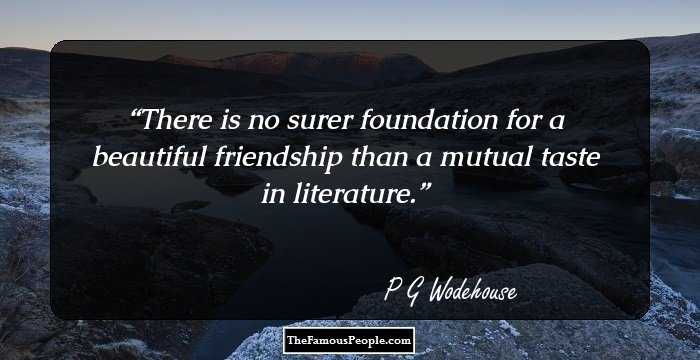 In 1900, unable to continue his studies, P. G. Wodehouse, began his career at the Hong Kong and Shanghai Bank. He was highly unsuited for the job, finding it not only very unpleasant, but also very baffling.

Each day, he looked forward to the evening, when the day’s work would be done and he would be able to go home and concentrate on his writing. Men Who Missed Their Own Weddings printed in the November 1900 issue of Tit-Bits, was his first published article.

In 1901, while still working at the bank and continuing to contribute to various magazines, P. G. Wodehouse secured an appointment at The Globe, a popular London newspaper. Here he wrote for the paper’s ‘By the Way’ column, a position he held until 1909.

Towards the end of 1901, he started writing his first novel, The Pothunters. From January 1902, it began to be printed as serial in ‘Public School Magazine’, finally being published as a full novel on 18 September, 1902.  In the same month, he resigned from his job at the bank.

Free from the shackles of his job, P. G. Wodehouse began writing full time, earning enough to finance a short trip to the USA in April 1904. His articles on his experience in America became popular in London and his income began to rise”.

Towards the end of 1902, he was invited to write an additional lyric for the musical comedy of ‘Sergeant Brue’, writing ‘Put Me in My Little Cell’ for it. It was well-received and he soon embarked on a new career, becoming a popular theatre writer for next three decades.

From 1902 to 1908, he wrote nine novels and co-authored two more. Among them, Love among Chickens published in 1806 is of major significance. In it, he first introduced the fictional character of ‘Stanley Featherstonehaugh Ukridg’, who kept on appearing in many of his subsequent stories. 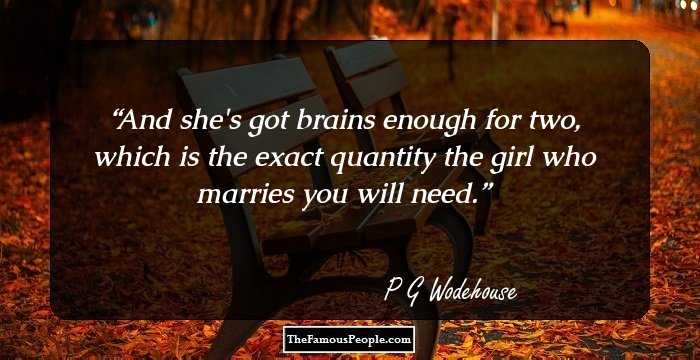 Quotes: You, Will, Need
In USA & England

In 1909, P. G. Wodehouse moved to New York, USA, where he put up at Greenwich Village. Here, he sold two short stories to Cosmopolitan and Collier's, receiving a total sum of $500.  Happy to get such a great amount, he resigned from The Globe and remained in New York.

Although he continued to sell stories, he was not offered permanent relationship. Therefore, in late 1910, he returned to England and rejoined The Globe. He also started contributing regularly to different journals including The Strand Magazine, revisiting the United States many times.

He was in the USA when the First World War broke out in 1914. He remained there until the end of the war, experimenting with different genre of fictions. Meanwhile on 29 September 1915, he had his fifteenth novel, Psmith, Journalist, published both in the UK and USA.

In 1915, between 26 June and 14 August, his new novel, Something New, set in ‘Blandings Castle’, appeared serially in The Saturday Evening Post, fetching him $3,500.  Later in September, it appeared in book form, both in the USA and UK. However, the UK edition was called Something Fresh.

Post war, P. G. Wodehouse returned to England, but continued visiting the USA, working for Broadway and West End. Concurrently, he kept on polishing his old characters, introducing new ones, publishing My Man Jeeves and A Damsel in Distress in 1919; The Clicking of Cuthbert and The Adventures of Sally in 1922.

In 1929, he signed a contract with Hollywood producer Metro-Goldwyn-Mayer for one year at $2,000 a week. The contract started in May 1930; but in spite of hiring him at a high salary, the studio found little work for him and therefore, he spent his time writing one novel and nine short stories.

In 1930s, P. G. Wodehouse reached the peak of his productivity, producing number of best-sellers like Right Ho Jeeves and earning a huge amount from their sale. However, it also created a unique problem for him. As he continued to shift between England and America, he was taxed by both the countries.

To avoid double taxation, he now moved to France, setting up his home near Le Touquet in northern France. There he continued to write, producing many more best-sellers, publishing Uncle Fred in Springtime on 18 August, 1939.  Thereafter, he started working on his next novel, Joy in the Morning.

On 20 May 1940, Le Touquet came under German occupation. He was earlier offered evacuation; but he had refused it because that would have meant leaving his wife and dog behind. On 21 May, he tried to leave for Portugal by car; but failed.

On 21 July 1940, P. G. Wodehouse was interned by the German authorities. He was moved from prison to prison until 21 July 1941. Thereafter, he was taken to Hotel Adlon in Berlin, where he interned until his release and had to bear his expenses with royalties from German translations of his books.

Between 28 July and 6 August, 1941, on the invitation of German authorities, he made six broadcasts via German radio. Entitled, ‘How to be an Internee Without Previous Training’, they comprised of humorous sketches on his experiences in German prison and also a little sarcasm at his captors.

As he used enemy facility, the broadcast created a furor in England and many called him a traitor. Many also defended him, calling his action nothing more than ‘stupidity’, while the United States War Department used it in its anti-Nazi campaign. He also realized his mistake.

P. G. Wodehouse remained in Germany until September 1943. He was allowed to return to Paris thereafter. Once the city was liberated, he was investigated and the report said, his action was ‘unwise’ and that there was no justification for further prosecution.

Although there was no charge against them, P. G. Wodehouse and his wife were arrested by French police sometime after November 1944.  Later, on the intervention of British journalist Malcolm Muggeridge, his wife was released and he was interned in a hospital, where he filled up his time writing Uncle Dynamite. 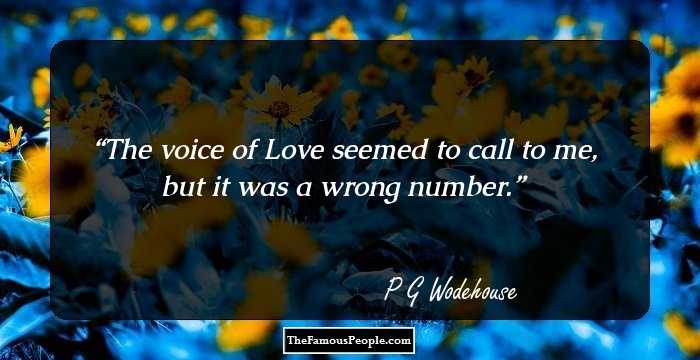 Quotes: Me, Love
In USA

On 15 January 1945, P. G. Wodehouse was released from his confinement. In June 1946, he was informed that he was free to leave the country and that there was no official charge against him. In April 1947, he and his wife sailed for USA, settling down first in Manhattan in New York.

It was a difficult time for P. G. Wodehouse. The New York he knew had changed since the war. A large some of his money was then tied up in England, causing financial stress. Until 1952, he also went through an unproductive period, not having any clue about his next novel.

In 1952, P. G. Woodehouse bought a house in Remsenburg, a quiet hamlet in Long Island, where he lived for the rest of his life. Here, he started writing once again, producing nine novels from 1952 till his death in 1975, depicting England as he saw it in his mind’s eye.

P. G. Wodehouse is best-known as the creator of ‘Jeeves’, the competent valet working for Bertie Wooster, the young, rich and idle Londoner. Created in 1915, the character continued to appear in number of his short stories and novels over a period of six decades.

He published his first full length Jeeves novel, ‘Thank you Jeeves, in 1934; the last in this series being ‘Aunts Aren’t Gentleman’ (1974).  However, ‘Right Ho Jeeves’, also published in 1934, is possibly the most popular among his Jeeves stories.

Although P. G. Woodhouse became an American citizen in 1955, he was also a British subject, thus remaining eligible for British honors. In 1967, he was considered for an award; but the British officials objected to it. Finally in 1975, he was awarded knighthood (KBE) on the intervention of the Prime Minister.

Sometime in September 1914, while he was living in the USA, P. G. Wodehouse married Ethel May Wayman, née Newton, an English widow with a daughter named Leonora. The marriage was childless; but Wodehouse legally adopted Leonora and was distraught when she died prematurely in 1844.

Although in 1965 the British government indicated that he was free to return to England, he never left USA.

In February 1975, one month after being awarded knighthood, P. G. Wodehouse got admitted to Southampton Hospital, Long Island, for treatment of some skin disease. He died there of heart attack on 14 February 1975.