(One of the Most Important Modernist 20th-Century Authors)

Virginia Woolf was an English author and novelist who wrote modernist classics. Not only is she known as a pioneer of modernism, but also as the greatest modernist literary personality of the twentieth century. She pioneered feminist texts as well. She is known for her works like ‘To the Lighthouse,’ ‘Mrs. Dalloway,’ ‘Orlando,’ and an essay titled ‘A Room of One's Own.’ An important figure in the ‘Victorian Literary Society,’ as well as an influential figure in the Bloomsbury group of intellectuals, Woolf was an innovator of English literature who used experimental language. Her works are considered unique as they go deep into the psychology of a character, portraying the way her character thinks. She published novels and essays, and received both critical and commercial success. She self-published most of her works through ‘Hogarth Press’ which she co-founded. Throughout her life, she suffered from mental illnesses, and took her own life in 1941, at the age of 59. Her posthumous reputation suffered after the ‘Second World War,’ but was re-established with the growth of feminist criticism during the 1970s. Woolf’s novels can be described as highly experimental. Her passion to find a new narration style gave rise to a unique combination of poetry and prose, making her works that much more intriguing. British Celebrities
British Women
King's College London
Women Writers
British Writers
Childhood & Early Life
Virginia Woolf was born Adeline Virginia Stephen on 25 January 1882, in South Kensington, London, England. Her parents, Sir Leslie Stephen, an editor and a critic, and Julia Prinsep Stephen, a photographer, were freethinking people. They educated her in their own literate and well-connected house. Since both her parents had been previously married, she grew up with several half-siblings.
Because her father was an editor, she grew up in an environment that had the influence of the Victorian literary society. There was a library in their house, from which the children were taught classics and English literature. Her brothers were educated at Cambridge and they often brought home literary works from Cambridge, which helped boost her intellect.
Her family made annual summer migrations from their London townhouse to the Talland House, situated on the rugged Cornwall coast. This annual relocation gave her an opportunity to experience the dualities, such as winter and summer, repression and freedom, city and country, etc.
Her mother passed away in 1895, and her sister passed away two years later, leaving Woolf in a state of shock. She lost her father in 1904, which had a severe impact on her mental stability. It was revealed later, that she suffered sexual abuse at the hands of her half-brothers, further adding to her trauma.

Quotes: I
Continue Reading Below
Career
Virginia Woolf began writing professionally in 1900. The first of her writings, which was a journalistic account of a visit to the Bronte family, was published anonymously in a journal in December 1904. She started writing for ‘The Times Literary Supplement’ the following year.
In 1915, she published her first novel ‘The Voyage Out,’ which was originally titled ‘Melymbrosia.’ The book was mostly about the experiences encountered in her life. She continued writings novels, self-publishing most of them, and gradually became a popular figure in the Victorian literary society.
In 1928, Virginia Woolf started taking grassroots approach to advocate feminism. She started addressing undergraduate women in various colleges. ‘A Room of One’s Own’ (1929) and ‘Three Guineas’ (1938) were two of her non-fiction works that discuss the hardships faced by women writers and intellectuals. Also, she wanted to make people realize the effects of industrialization as well as create awareness about birth control.
It was during the bombing of London in 1940 and 1941 that she worked on ‘Between the Acts’ which portrayed war as a threat to art and humanity. Though she raised several questions in this work, she later felt that her work was of little significance as England seemed to be on the verge of invasion. It was such horrors that made it difficult for her to write. She was also plagued by mental illnesses, leading to her suicide in 1941. Her work was published later that year after her death.
With the end of the ‘Second World War,’ her posthumous popularity suffered. However, her works gained popularity again in the 1970s with the advent of feminist criticism. Despite her fame, she earned criticism for being anti-Semitic and for her snobbery—attributes that she claimed to own in her personal diary. 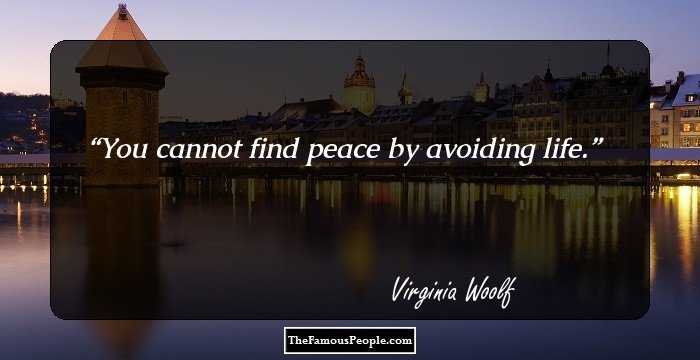 Quotes: You, Life, Peace
Major Works
Her first work ‘The Voyage Out’ was published on 26 March 1915 by her half-brother Duckworth’s company. It was written when she was psychologically vulnerable, and suffering from depression.
In 1981, an alternate version of ‘The Voyage Out,’ under its original title ‘Melymbrosia,’ was published by an American writer, editor, and Professor Louise DeSalvo. DeSalvo claimed that the release of the alternate version was an attempt to restore the novel as Woolf had originally conceived it. The work included subjects like homosexuality, women’s issues, and colonialism. Since Woolf had been warned by her colleagues that publishing such an outspoken work would affect her career, the original version had been heavily edited.
‘To the Lighthouse’ was one of her important works. It was published in 1927 by ‘Hogarth Press’—which she had co-founded with her husband. What’s unique about this novel is that it contains little dialogue, and almost no action, as most of it was written as thoughts and observations. Childhood emotions were recalled and adult relationships were highlighted. She had begun writing this book as a way of understanding as well as dealing with unresolved issues concerning her parents. Hence, similarities with her life can be seen in the book.
‘The Waves’ was published in 1931. It was one of her most experimental novels. It consists of six characters, through which Virginia Woolf explores concepts of individuality, self, and community. It is difficult to assign a genre to this novel, because of its complexity. In fact, the book cannot even be categorized as a novel because of its complexity. As described in Woolf’s biography, it is less of a novel and more of a ‘playpoem.’ The book was translated by Marguerite Yourcenar in 1937.
'Flush: A Biography’ was published in 1933 by ‘Hogarth Press.’ The book, which views city life through the eyes of a dog, is a harsh criticism of the unnatural ways adopted by the people living in the city. Woolf’s emotional and philosophical views are verbalized in this book.
Awards & Achievements
Her work ‘To the Lighthouse’ was ranked number 15 by the ‘Modern Library’ in 1998, on its list of ‘100 best English language novels of the 20th century.’ The ‘TIME’ magazine also chose it as one of the best English language novels published between 1923 and 2005. 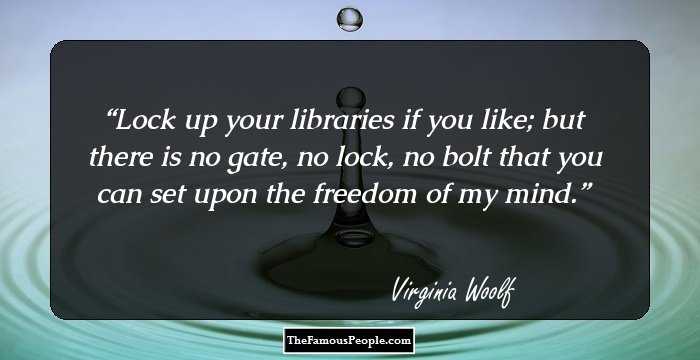 Quotes: You
Personal Life & Legacy
Virginia Stephen married writer Leonard Woolf in 1912. They shared a close bond and led a happy married life, which lasted until her death in 1941. The two also collaborated professionally.
She was bisexual and believed in exploring her sexuality. In 1922, she met a writer and gardener named Vita Sackville, with whom she had a sexual relationship.
Because of the trauma she endured in her childhood, she suffered from mental illnesses for most of her life. Unable to bear it anymore, she committed suicide by filling her pockets with stones and then drowning herself in a river on 28 March 1941. Her body was found on 18 April, 1941. Her husband Leonard buried her cremated remains in the garden of their house in Sussex.

Quotes By Virginia Woolf | Quote Of The Day | Top 100 Quotes

See the events in life of Virginia Woolf in Chronological Order