J.R.R. Tolkien was an English writer, philologist, and academic. What started as a bedtime story, which he narrated to his children, ‘The Hobbit’ became an award-winning novel, with hundreds of millions of fans from across the world. Described as ‘grew in the telling,’ the novel became one of his most-loved books along with his richly inventive epic tale series ‘The Lord of the Rings’ which was written in bits and pieces and sent as letters to his kids. J.R.R. Tolkien was an internationally acclaimed writer, most popular for his dark fantasy stories. His areas of expertise included Old English, poetry, literature, and mythology, inspired by early Germanic. Apart from novels, he also authored a series of short stories. It was due to his connection with fictional histories, fantasy writings, and constructed languages that he came to be known as the ‘father of modern fantasy literature.’ His epic tale series ‘The Lord of the Rings’ has been translated into more than 25 languages for readers across the world. Even after 50 years of its original publication, it has often been ranked among the best-loved stories created in the 20th century, along with ‘The Hobbit.’ These two novels have been adapted into award-winning blockbuster movies by Hollywood director Peter Jackson. J. K. Rowling
DID WE MISS SOMEONE?
CLICK HERE AND TELL US
WE'LL MAKE SURE
THEY'RE HERE A.S.A.P
Quick Facts

Cause of Death: Bleeding Ulcer And Chest Infection

British Celebrities
Novelists
Philologists
British Men
Male Poets
Childhood & Early Life
John Ronald Reuel Tolkien was born on January 3, 1892, in Bloemfontein, Orange Free State (modern-day South Africa), to Mabel Suffield and English bank manager Arthur Reuel Tolkien.
His father died of rheumatic fever when he was three, and hence, started living with his maternal grandparents in Kings Heath, Birmingham, along with his mother and younger brother, Hilary.
After initial education at home, he went to ‘King Edward’s School’ and later attended ‘St. Philip’s School.’ He returned to ‘King Edward’s School’ through a ‘Foundation Scholarship’ in 1903.
His mother died in 1904 due to acute diabetes. Thereafter, he was brought up by her friend, Fr. Francis Xavier Morgan of the ‘Birmingham Oratory.’
In 1911, he enrolled at ‘Exeter College,’ Oxford, to study classics but changed his course to study English language and literature in 1913. He graduated with first-class honors in 1915.
He penned his first poem ‘From the many-willow’d margin of the immemorial Thames’ in 1913, at ‘Exeter College.’ The poem was published in the college’s ‘Stapeldon Magazine.’ 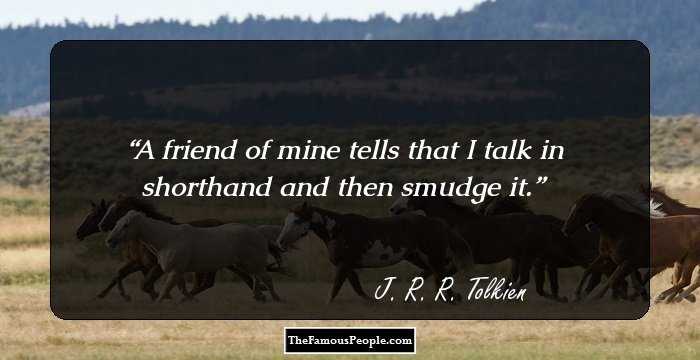 Continue Reading Below
Career
Around 1909, he composed ‘The Book of the Foxrook,’ a sixteen-page notebook.
He began to work on what he called ‘The Book of Lost Tales,’ beginning with ‘The Fall of Gondolin.’
He served as a second lieutenant in the ‘Lancashire Fusiliers’ in 1916 and fought in the ‘Battle of the Somme’ on the Western Front. He contracted trench fever, a typhus-like infection, due to which he was sent back to England.
On November 1920, he was demobilized and left the army, retaining his rank of lieutenant.
In 1918, he started working as an assistant lexicographer at ‘The Oxford English Dictionary.’ Subsequently, in 1920, he joined the ‘University of Leeds’ as a reader in English Language.
He produced ‘A Middle English Vocabulary’ and an edition of ‘Sir Gawain and the Green Knight’ along with E.V. Gordon.
In 1925, he joined ‘Oxford University’ as Rawlinson and Bosworth Professor of Anglo-Saxon, where he published the philological essay ‘Nodens’ in 1932. The essay was based on the 1928 unearthing of a Roman Asclepeion by Sir Mortimer Wheeler at Lydney Park, Gloucestershire.
The first three volumes of his epic novel ‘The Lord of the Rings’ – ‘The Fellowship of the Ring,’ ‘The Two Towers,’ and ‘The Return of the King’ received mixed reviews from the readers.
His lecture on ‘Beowulf: The Monsters and the Critics’ in 1936, based on the early medieval epic ‘Beowulf,’ was highly appreciated.
Continue Reading Below
During ‘World War II,’ he was assigned as a codebreaker in the cryptographic department of the Foreign Office in 1939. However, he never worked as a codebreaker due to non-requirement of his services.
He was hired by ‘Merton College,’ Oxford, in 1945 as a Professor of English Language and Literature, a position which he retained until his retirement in 1959.
He wrote numerous fantasy tales for children, which included ‘The Father Christmas Letters,’ ‘Mr. Bliss and Roverandom,’ ‘Tree and Leaf,’ ‘Smith of Wootton Major,’ ‘On Fairy-Stories,’ and ‘The Adventures of Tom Bombadil.’
During his retirement life, from 1959 until his death in 1973, Tolkien received public attention and literary fame. In 1961, his friend C. S. Lewis even nominated him for the prestigious ‘Nobel Prize in Literature.’ 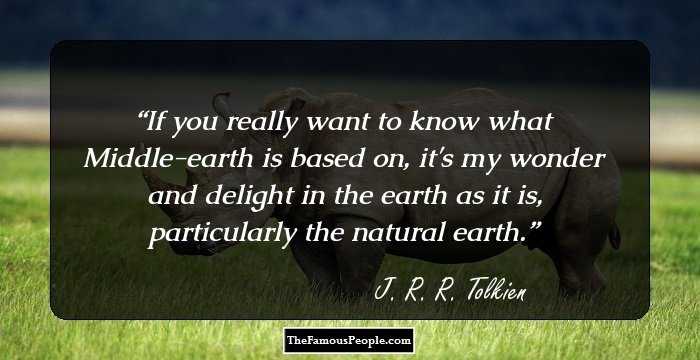 Major Works
He translated the Old English epic poem ‘Beowulf: A Translation and Commentary’ in 1926. However, it was edited and published posthumously by his son in 2014.
He wrote the award-winning novel ‘The Hobbit’ – an interpretation of the history of Middle-earth in 1937. Supported by over 100 drawings, the novel became popular as a children’s book, though it was originally written for adults.
While writing a sequel to ‘The Hobbit,’ he produced the highly-successful book ‘The Lord of the Rings,’ which was completed over a period of ten years, with the first three parts published during 1954-55 as a trilogy.
Awards & Achievements
‘The National University of Ireland’ and ‘University of Liege’ presented him with an honorary degree in 1954.
Continue Reading Below
In 1972, he was made a Commander of the Order of the British Empire by Queen Elizabeth II.
His work ‘The Silmarillion’ won the ‘Locus Award’ for ‘Best Fantasy novel’ in 1978.
In 2002, he was ranked number 92 on the list of ‘100 Greatest Britons’ by ‘BBC.’ In 2004, he was placed at number 35 on SABC3’s ‘Great South Africans.’
‘The Lord of the Rings’ was adjudged UK’s ‘best-loved novel’ in a survey conducted by ‘BBC’ in 2003. Australians voted the book as ‘My Favorite Book’ in a poll conducted by the ‘Australian ABC’ in 2004.
He was placed sixth on the list of ‘The 50 greatest British writers since 1945’ which was published by ‘The Times’ in 2008.
In 2009, he was named as the fifth top-earning ‘dead celebrity’ by ‘Forbes.’ 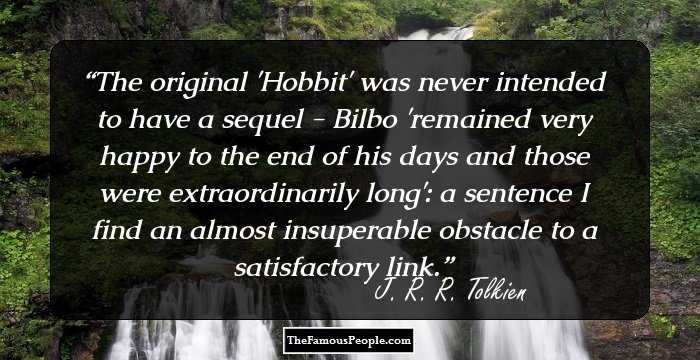 Personal Life & Legacy
When he was 16, he got romantically involved with Edith Mary Bratt, but was asked not to see her until he turned 21 by his guardian, Father Morgen. At 21, he renewed his relationship with Edith and got engaged to her in 1913. He got married to her in 1916 at ‘St. Mary Immaculate Roman Catholic Church,’ Warwick.
The couple had four children – John Francis Reuel Tolkien (1917), Michael Hilary Reuel Tolkien (1920), Christopher John Reuel Tolkien (1924), and Priscilla Mary Anne Reuel Tolkien (1929).
Continue Reading Below
His wife Edith died in 1971 and was buried at ‘Wolvercote Cemetery,’ Oxford. He died 21 months later in 1973 and was put to rest in his wife’s grave.
Several of his works and stories were published posthumously by his son Christopher. Some of his works that were published posthumously include ‘The Silmarillion,’ ‘Mr. Bliss,’ ‘The Fall of Arthur,’ ‘Unfinished Tales of Númenor and Middle-earth,’ and ‘The Legend of Sigurd and Gudrún.’
‘The Lord of the Rings’ was adapted into an Oscar-winning film trilogy. The films were released from 2001 to 2003.
‘The Hobbit’ saw movie adaptations in three installments – ‘The Hobbit: An Unexpected Journey’ (2012), ‘The Hobbit: The Desolation of Smaug’ (2013), and ‘The Hobbit: The Battle of the Five Armies’ (2014).
‘Oxford University’ offers a professorship in his name, ‘J.R.R. Tolkien Professor of English Literature and Language,’ while ‘The Tolkien Society’ organizes ‘Tolkien Reading Day’ on March 25 every year in schools worldwide.
Seven blue plaques have been inducted across four cities in England to mark his association - Birmingham, Bournemouth, Leeds, and Oxford.
Trivia
He was well-versed in numerous languages, which include Latin, French, German, Middle English, Finnish, Gothic, Old English, Italian, Spanish, Danish, Russian, Serbian, Swedish, and others, due to his love for linguistic knowledge.
His love for constructing languages resulted in Quenya and Sindarin - two of the most developed forms, which formed the core of his legendarium.
He studied Old Norse and Old English at Oxford.
In 1999, 250,000 ‘Amazon’ customers voted his novel ‘The Lord of the Rings’ (1954) as the ‘book of the millennium.’
Recommended Lists:
Writers #2
Miscellaneous #215
Intellectuals & Academics #716

See the events in life of J. R. R. Tolkien in Chronological Order