(Known for His Classic Series 'The Chronicles of Narnia')

C. S. Lewis was a British writer. He is an internationally recognized literary figure, widely regarded as a pioneer of children’s fantasy novels. Often hailed as the ‘Father of Modern Fantasy,’ he was among the most versatile authors who wrote on a diverse range of topics and genres. He authored many poems, science fiction novels, literary critical books, non-fictional Christian religious books, and fantasy stories. He is best known for his children’s fantasy novel ‘The Chronicles of Narnia,’ which received immense success; it was also adapted into a movie, which became one of the highest-grossing movies of the 21st century. Some of his other notable works include his widely acclaimed books on Christian faith: ‘The Case for Christianity,’ ‘Christian Behaviour,’ ‘Mere Christianity,’ ‘Miracles,’ and ‘The Problem of Pain.’ Many of his writings on Christianity are used today all over the world by many Christian missionaries and preachers, who practice and profess the religion to millions. He also held prestigious positions at ‘Oxford University’ and ‘Cambridge University.’ His writings have been translated into more than 30 languages all over the world and have sold millions of copies. Geri Halliwell
DID WE MISS SOMEONE?
CLICK HERE AND TELL US
WE'LL MAKE SURE
THEY'RE HERE A.S.A.P
Quick Facts

Clive Staples Lewis was born on November 29, 1898, in Belfast, Ireland, to Albert James Lewis, a solicitor, and Florence Augusta, the daughter of an Anglican priest.

When he was seven years old, his family relocated to the East Belfast area. As a child, he loved reading fantasy stories and was intrigued by imaginary creatures and anthropomorphic animals.

In 1908, he attended ‘Wynyard School,’ located in Watford, before which he was privately tutored at home. He later attended ‘Campbell College,’ but dropped out due to respiratory problems.

Later, he went to a health-resort in Malvern town, where he attended the ‘Cherbourg House’ preparatory school. During his stay in Malvern, he became passionate about mythology.

In 1913, he got admitted to ‘Malvern College,’ but dropped out as he could not mingle with his fellow students. He was then privately tutored at home by William T. Kirkpatrick.

In 1916, he was granted a scholarship to study at the ‘University College,’ Oxford. However, the following year, he took a hiatus from his education in order to join the British Army.

In 1918, he was wounded in ‘World War I,’ following which he suffered from depression. After his health improved, he was assigned work in Andover, England. In December that year, he was discharged from the army and continued his education. 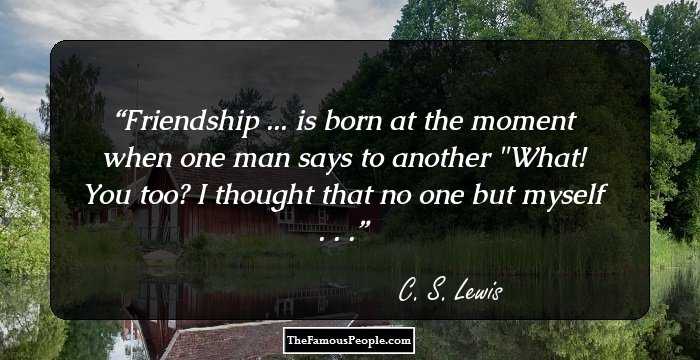 Quotes: You, I
Continue Reading Below
Career

In 1919, he came up with his first publication ‘Spirits in Bondage,’ a book of poems, which was published under his pen name ‘Clive Hamilton.’

�In 1925, he was appointed as a lecturer of English literature at ‘Magdalen College,’ University of Oxford. He had also previously served as a philosophy tutor at the ‘University College of Oxford.’

In 1933, his fictional fantasy novel ‘The Pilgrim's Regress,’ which was one of his earliest works of prose fiction, was published by ‘J.M. Dent and Sons’ in the United Kingdom.

In 1936, his non-fictional book titled ‘The Allegory of Love: A Study in Medieval Tradition’ was published. The book was an account of how love was perceived in the Middle Ages and Renaissance period.

On April 27, 1939, his work ‘The Personal Heresy,’ which was a collection of articles written by him and Eustace Tillyard, a British scholar, was published by the ‘Oxford University Press.’

In the 1940s, he published several non-fictional books like ‘The Problem of Pain,’ ‘The Case for Christianity,’ ‘A Preface to Paradise Lost,’ ‘Broadcast Talks,’ ‘The Abolition of Man,’ ‘Christian Behaviour,’ and ‘Beyond Personality.’

In 1945, he came up with the science fiction novel ‘That Hideous Strength.’ The same year, his religious work ‘The Great Divorce,’ which highlights the Christian concept of heaven and hell, was published.

In 1950, his novel ‘The Lion, the Witch and the Wardrobe,’ the first of his children’s fantasy novel series ‘The Chronicles of Narnia,’ was published by the ‘Geoffrey Bles’ publishing house.

During the 1950s, he came up with six novels from the ‘The Chronicles of Narnia’ series. These novels are ‘The Magician's Nephew,’ ‘The Horse and His Boy,’ ‘Prince Caspian,’ ‘The Voyage of the Dawn Treader,’ ‘The Silver Chair,’ and ‘The Last Battle.’

In 1956, his mythological novel ‘Till We Have Faces: A Myth Retold’ was published. The novel was a re-telling of the Greek mythological figures Cupid and Psyche.

In 1960, his non-fictional book titled ‘Miracles’ was published. The same year, he also came up with three other non-fictional books: ‘The Four Loves,’ ‘Studies in Words,’ and ‘The World's Last Night and Other Essays.

In 1961, his critical book ‘An Experiment in Criticism’ was published by the ‘Cambridge University Press.’ The same year, his work ‘A Grief Observed’ was published under the pen name ‘N.W. Clerk.’ 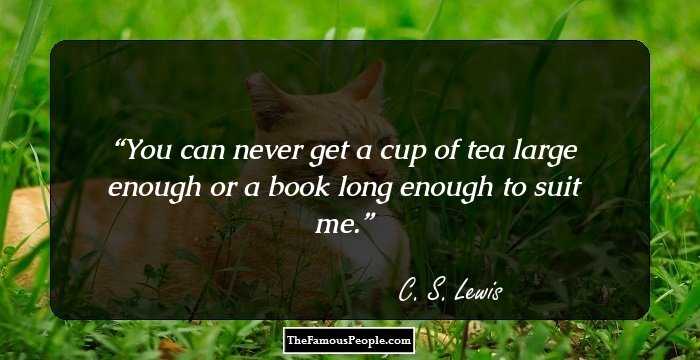 Quotes: You, Me, Never
Major Works

His ground-breaking children’s fantasy series ‘The Chronicles of Narnia’ was adapted into three commercially successful films in 2005, 2008, and 2010. It became one of the highest-grossing film series of all time. The series has also been adapted for ‘BBC Radio 4.’

In 1956, he married Joy Davidman, an American writer. She died in 1960 after suffering from cancer.

He died on 22 November 1963, at the age of 64, due to renal failure. He was laid to rest at the churchyard of ‘Holy Trinity Church,’ Headington, Oxford.

In 2005, a one-hour television biopic titled ‘C. S. Lewis: Beyond Narnia’ was made. His role was portrayed by English actor Anton Rodgers. 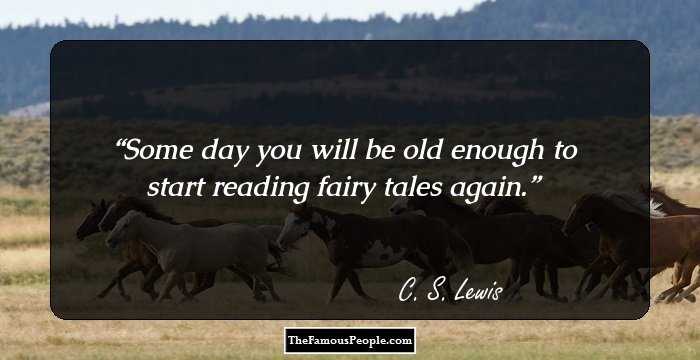 Quotes: You, Will
Trivia

This acclaimed writer, who lost his dog Jacksie at the age of four, announced that he wished to be addressed as ‘Jacksie’ and refused to respond to his own name.

See the events in life of C. S. Lewis in Chronological Order