(The First Person to Walk on the Moon)

Neil Armstrong was an American astronaut and the first person to walk on the Moon. Trained as an aeronautical engineer, he served as a test pilot before being selected as an astronaut. Interestingly, all his accomplishments would not have happened had Dick Day, not placed his application for astronaut with the ones that arrived on time; Armstrong’s application had arrived about a week after the deadline. Armstrong’s first mission into the space was as command pilot of Gemini 8 in 1966. With this, he became the first civilian to fly in space. His second and last space flight occurred three years later in 1969 when he joined Aldrin and Collins aboard Apollo 11 for NASA’s first manned mission to moon. Armstrong spent about two hours walking on the moon surface, collecting samples and conducting experiments. His fiery determination coupled with his heroic demeanour and unwavering team spirit made him a man of virtue and honor. To know in details about his life and profile, scroll further. Sunita Williams
DID WE MISS SOMEONE?
CLICK HERE AND TELL US
WE'LL MAKE SURE
THEY'RE HERE A.S.A.P
Quick Facts

Cause of Death: Bypass Operation 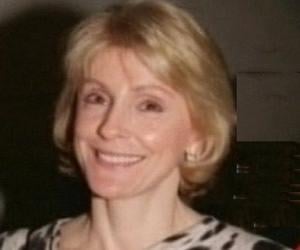 American Celebrities
Astronauts
Aerospace Engineers
American Men
Purdue University
Childhood & Early Life
Neil Armstrong was born on on August 5, 1930, at Wapakoneta, Ohio. He was the eldest child of Stephen Koenig Armstrong and Viola Louise. He had a younger sister, June, and a younger brother, Dean. Since his father was employed as an auditor for the government, much of his early life was spent travelling from one city to another.
His love for flying grew quite early when his father took him to the Cleveland Air Races. He was just two-year-old at that time. At the age of five, he experienced his first ever airplane flight. This left an indelible mark on the mind of young Neil.
He attended the Blume High School at Wapakoneta, Ohio. Alongside, he took flying lessons and earned his student light certificate at the age of 16. He was an active member of the Boy Scouts and soon climbed up the rank to become an Eagle Scout.
In 1947, he enrolled at the Purdue University to study aeronautical engineering. He was sponsored by the Holloway Plan, according to which it was mandatory for him to serve the U.S. Navy for three years.
After his engineering course, he was called to join the service in 1949, and asked to report to Naval Air Station Pensacola for flight training. After about 18 months of rigorous training, he finally qualified as a naval aviator in August 1950.
After undertaking a few routine assignments, he saw action for the first time in the Korean War, in August 1951, when he flew as an escort for a photo reconnaissance plane over Songjin.
In his three years career in the U. S. Navy, he flew 78 missions over Korea for a total of 121 hours. He left the Navy on August 23, 1952, and became a Lieutenant, Junior Grade, in the U.S. Naval Reserve, where he served for eight years before resigning in 1960.
Re-joining university, he finally attained his graduation degree in 1955. Further in 1970, he attained a Master of Science degree in Aerospace Engineering from the University of Southern California. 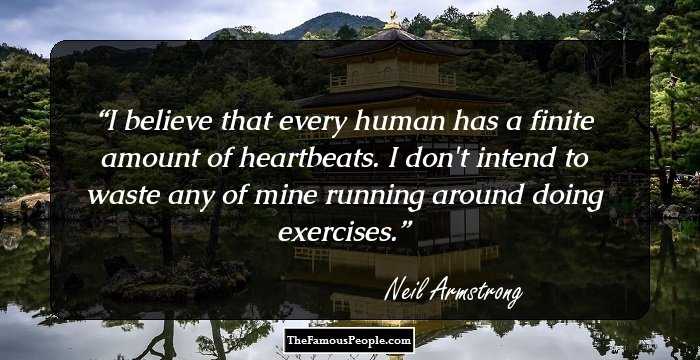 Quotes: Believe, I
Continue Reading Below
Career
In 1955, with an aim to become an experimental research test pilot, he applied for National Advisory Committee for Aeronautics (NACA). However, due to no open positions, his application was forwarded to the Lewis Flight Propulsion Laboratory in Cleveland, where he began working.
He moved back to NACA after a couple of months. His first assignment was to pilot chase planes during releases of experimental aircraft from modified bombers.
During his seventeen years of service for National Aeronautics and Space Administration NASA (formerly known as NACA), he served in various capacities including as an engineer, test pilot, astronaut and administrator.
As a research pilot, he tested numerous high-speed aircraft, including the X-15, which could reach a top speed of 4,000 miles per hour. Overall, he flew about 200 different models of aircrafts, including jets, rockets, helicopter and gliders.
Year 1958, marked his selection in the U.S. Air Force's Man In Space Soonest program. Two years later, he was chosen as part of the pilot consultant group for the X-20 Dyna-Soar. In 1962, he finally made it in the top seven pilot engineers who would fly space plane.
He became the first American civilian to travel in space. His first mission with the Gemini VII was as Command Pilot, which launched on March 16, 1966. Originally planned to last for 75 hours and 55 orbits, the spacecraft returned 11 hours after its start due to technical problems.
His last assignment for the Gemini program was for Gemini 11, wherein he worked as a back-up Command Pilot. The launch was scheduled for September 12, 1966 with Armstrong as a CAPCOM.
On December 23, 1968, he was appointed to the post of the commander for Apollo 11. Buzz Aldrin was lunar module pilot while Michael Collins served as command module pilot.
The trio landed on the moon on July 20, 1969, a few seconds after 20:17:40 UTC. Armstrong became the first to land on the Moon. His first words were, ‘That's one small step for a man, one giant leap for mankind’.
Continue Reading Below
After a brief walk on the Moon which lasted for about two hours, he re-entered the spacecraft and journeyed back to Earth. They landed in the Pacific Ocean and were picked up by USS Hornet.
After spending 18 days in quarantine, he along with the crew moved around the world as part of a 45-day ‘Giant Leap’ tour. Post his Apollo 11 flight, he announced his plan of not flying in space again.
In 1970, he was appointed as the Deputy Associate Administrator for aeronautics for the Office of Advanced Research and Technology, Advanced Research Projects Agency (ARPA), but served the same for a year, resigning from it and NASA.
He took up a teaching position at the University of Cincinnati in the Department of Aerospace Engineering. He remained in the position for about eight years, resigning in 1979.
Meanwhile, he acted as a spokesperson for several US businesses including General Time Corporation and the Bankers Association of America. Additionally, he was a member of the board of directors of several companies such as Marathon Oil, Learjet, Cinergy, Taft Broadcasting, United Airlines, Eaton Corporation, AIL Systems and Thiokol. 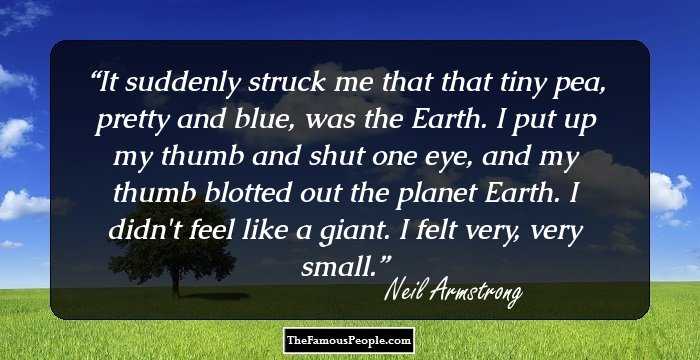 Quotes: Me, Like, I
Major Works
With his appointment as an astronaut, he became NASA’s first civilian to fly in space. However, the most spectacular achievement of his life was undertaking the Apollo 11 mission, which was the first manned mission to Moon. He became the first man ever to walk on the Moon surface, which lasted for a little over two hours.
Awards & Achievements
He was conferred with many prestigious awards including Presidential Medal of Freedom, Congressional Space Medal of Honor, Robert H. Goddard Memorial Trophy, Sylvanus Thayer Award and Collier Trophy from the National Aeronautics Association.
Furthermore, he received the Congressional Gold Medal, NASA Distinguished Service Medal, Langley Gold Medal, American Astronautical Society Flight Achievement Award and the John J. Montgomery Award
He was inducted in the Aerospace Walk of Honor and the United States Astronaut Hall of Fame.
An asteroid in space and a lunar crater has been named after him. Furthermore, several schools, institutions, streets, buildings, airports and public squares across the globe have been named after him.
He received the 2013 General James E. Hill Lifetime Space Achievement Award from the Space Foundation. 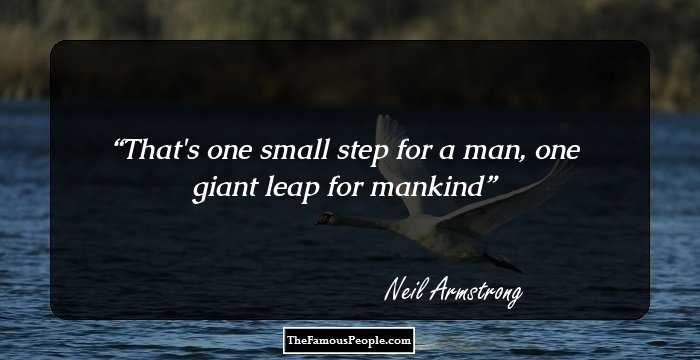 Personal Life & Legacy
He walked down the aisle with Janet Elizabeth Shearon on January 28, 1956, at the Congregational Church in Wilmette, Illinois. The couple was blessed with three children.
He underwent a bypass surgery to relieve blocked coronary arteries on August 7, 2012. A few days later, on August 25, he breathed his last.
Trivia
He is the first man ever to walk on the surface of the Moon.
Recommended Lists:
Miscellaneous #1
Engineers #25

Quotes By Neil Armstrong | Quote Of The Day | Top 100 Quotes

See the events in life of Neil Armstrong in Chronological Order