Advanced Search
Napoleon Hill was an American writer, known for his personal-success literature. He wrote one of the greatest self-improvement books of all time: “Think and Grow Rich!”. He lost his mother when he was ten years old, and his father was inept in taking care of him. A rebellious young Napoleon Hill was encouraged by his step-mother to take to writing. He became a freelance reporter. During the course of his work, he came to meet Andrew Carnegie. He challenged Hill to dedicate his life to find the formula of success of achievers, which he believed to be the same for all. This changed the course of Hill’s life. He dedicated two decades of his life interviewing successful men from different walks of life. He compiled his results in a number of books which won him name, fame and money. He considered freedom, democracy, capitalism, and peace to be important contributing elements to the philosophy of achievement. Emotions such as fear and selfishness were a deterrent to success. Further, people who held no firm beliefs could never achieve success. He coined the concept of Master Mind, which he defined as “coordination of knowledge and effort in a spirit of harmony, between two or more people, for the attainment of a definite purpose”. After his death, his legacy was carried forward by the Napoleon Hill Foundation. American Celebrities
Non-Fiction Writers
American Men
Male Writers
Scorpio Writers
Childhood & Early Life
Napoleon Hill was born Oliver Napoleon Hill on October 26, 1883. When he was ten years old, his mother passed away.
His father re-married, and his step-mother Martha encouraged him to give up his six-shooter for a type writing machine, and inspired him to write. At fifteen, he began working as a freelance reporter. 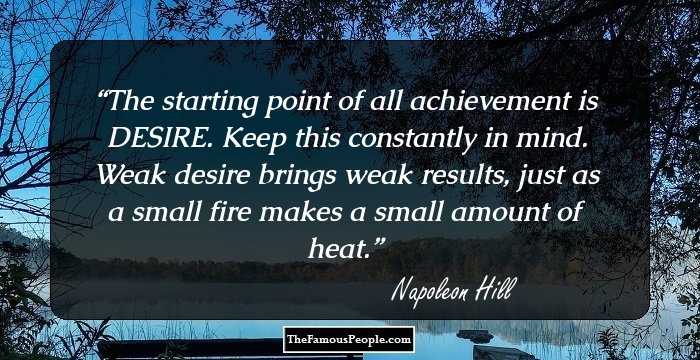 Continue Reading Below
Career & Later Life
Hill entered law school, but withdrew for financial reasons. He landed a job with Bob Taylor’s Magazine that offered advice on achieving power and wealth. He interviewed Andrew Carnegie in 1908, a steel magnate.
Carnegie challenged Hill to interview the wealthiest and most successful men of the time, and compile the philosophy of achievement behind their success, which he believed was the same for all achievers.
Carnegie offered to introduce him to the most successful men of the time. Hill jumped at the opportunity, and the next two decades saw him work on this mission without compensation.
Hill interviewed the most famous people of the time, including Thomas Edison, Alexander Graham Bell, George Eastman, Henry Ford, Elmer Gates, John D. Rockefeller, Charles M. Schwab, F.W. Woolworth, Theodore Roosevelt and Woodrow Wilson.
In 1912, he left for Chicago. He worked in various fields. When World War I began, he wrote to President Woodrow Wilson offering his services. Wilson put him to work on propaganda materials.
From 1919 to 1920, he brought out “Hill’s Golden Rule”, a magazine dedicated to the philosophy of success blended with biblical psalms and gospel teachings. Printed by George Williams, it was an instant hit.
In 1920, he began a nationwide tour. Rifts between him and Williams, who seized control of the magazine, prompted Hill to move to New York. He started a magazine which became a bigger success.
He established himself as philosopher-laureate of success and ethics. However, his colleagues’ action led to the newspaper’s closure. He moved to Ohio, and operated a college offering courses in journalism, advertising and public speaking.
He met Don Mellet, and when Mellet exposed gangsters in his Canton Daily News, Hill approached the Governor for an investigation. In 1926, Mellet was gunned down. Hill luckily escaped to West Virginia.
Continue Reading Below
The Great Depression left him devoid of all that he had earned including his home and the dream school. However, the passion did not fade. In 1930 he published “The Magic Ladder to Success”.
When President Roosevelt asked Hill to join the National Recovery Administration to help inspire public confidence, he accepted. He worked as an unpaid advisor to the president from 1933 to 1936.
He went to South Carolina to create a self-improvement course at William Plumer Jacobs’ request in 1941. Production of the 16-volume set, “Mental Dynamite”, was halted due to paper rationing during World War II.
While lecturing in Chicago, he met W. Clement Stone. In 1952, they entered into a partnership to produce books and courses. He taught his Philosophy of Personal Achievement, and lectured on “Science of Success”.
The period of his association with Stone saw him publish “How to Raise Your Own Salary”, “Success Through a Positive Mental Attitude”, and “Grow Rich With Peace of Mind”.
In 1970, his book “Succeed and Grow Rich Through Persuasion” was published. After his death, his wife Annie Lou appointed Stone as the executive director of the Napoleon Hill Foundation. 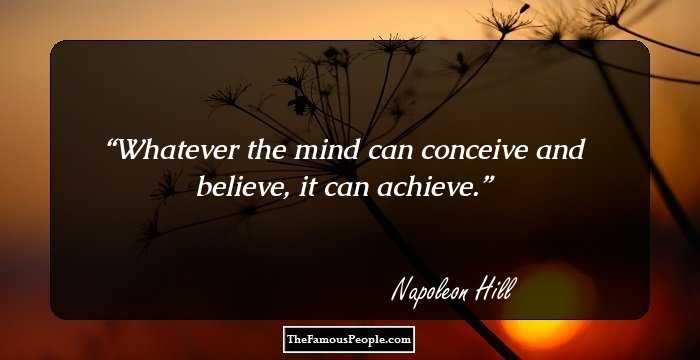 Quotes: Believe
Major Works
Hill completed his eight-volume “Law of Success” in 1928, published by Andrew Pelton. The collective wisdom of the greatest achievers of the early twentieth century was available in it. His work became a sensation.
In 1937, his then wife Rosa helped him complete the book “Think and Grow Rich!”. Published by Andrew Pelton, it became the greatest self-improvement book. Divorce gave Rosa all the royalties for the book.
Awards & Achievements
Hill coined the phrase 'Master Mind'. For developing the Master Mind concept and other principles of success, he was awarded an honorary Doctor of Literature degree (Litt.D.) by Pacific International University. 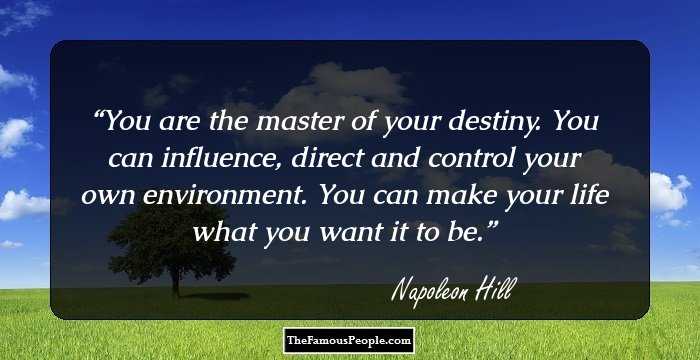 Quotes: You, Life
Personal Life & Legacy
In 1910, Hill married Florence Elizabeth Hornor. They had three sons: James, Napoleon Blair, and David. The ups and downs of his career had him move from place to place, leaving his family behind. In 1935, his marriage to Hornor was terminated.
Two years later, he met 29-year-old Rosa Lee Beeland in Atlanta whom he married. She helped him complete “Think and Grow Rich!”. A widening gulf between Rosa and Hill ended in divorce. He was bankrupt after a prenuptial agreement gave Rosa virtually all royalties for “Think and Grow Rich!”.
He became friends with Annie Lou Norman. She was working for Jacobs Press, and both were staying in the same building. They married in 1943, and moved to California where he took up lecturing.
Trivia
This inspiring writer’s book “Think and Grow Rich!” was published by Andrew Pelton who, after reading the manuscript, wanted it to be titled “Use Your Noodle to Win More Boodle”!

Quotes By Napoleon Hill | Quote Of The Day | Top 100 Quotes

See the events in life of Napoleon Hill in Chronological Order