Aphra Behn was a British author, poet and playwright of the English Restoration era, who went on to become the first English woman to make a living out of writing. It was for her work as a writer that she became a literary role model for later women authors, writers and poets. Interestingly, a well-known and popular author of the mid-17th century England, Behn’s origin is somewhat indefinite. However, she soon rose above the anonymity and came into prominence in the Courts due to her wit and talent. She even served as a political spy for Charles II in Antwerp. Returning to England, she started writing to support a living. In her lifetime, she penned about nineteen plays, four novels and several short stories and poems; the decades of 1670s and 1680s being her most productive phase. Additionally, she translated several works from French and Latin. Each of her works was well received thus establishing her reputation as one of the most prolific and high-profile female writers. Though Behn wrote several plays, it is her work of fiction that has drawn more interest over the years. Nevertheless, her poems and plays have been equally applauded and appreciated

British People
Novelists
Playwrights
British Women
Cancer Poets
Childhood & Early Life
Apra Behn was born in 1640 in Kent, England. There is not much information regarding her early life. While some speculate that she was born to a barber, John Amis and his wife Amy, others believe that she was born to a couple named Cooper. There is another version, according to which she was the daughter of Mr and Mrs John Johnson of Canterbury.
It is certain that in 1663, young Aphra accompanied the Johnson’s on their voyage to West Indies. During the journey, Johnson passed away. As such, the family settled down in Surinam. The sudden death and the eventual stay in Surinam left a deep impact on young Aphra. 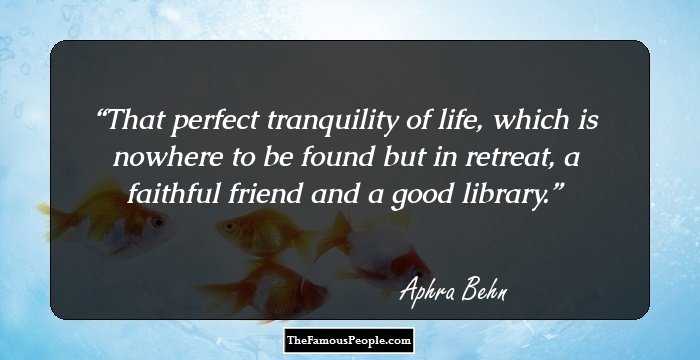 Quotes: Life
Continue Reading Below
Career
Her visit to Surinam ended in 1664, as she returned to England the same year. In England, she married Johan Behn, a Dutch merchant and soon after was known by the moniker, Mrs Behn.
The sudden death of her husband left Behn with absolutely no money to fall back on. Her wit and talent earned her the position of an intelligence gatherer or political spy for King Charles during the Second Anglo-Dutch War. She moved to Antwerp under the code name Astrea. Her main role as a spy was to establish intimacy with William Scot, son of a regicide Thomas Scot.
Her proceeds as a spy did not bring in much valuable information. Moreover, her expenses steeply increased due to the enhanced cost of living. Adding to the woes was the refusal on part of King Charles to pay the money. With no means to fall back to, she borrowed money for her journey back to England.
Despite repeated attempts and year-long petitioning, King Charles refused to pay Behn money for her work as a spy. Unable to pay the debt, she was forced into debtor’s prison. Though she was released shortly, circumstances that led to her release are unknown.
Behn started writing to support a living. She worked as a copyist for the King's Company and the Duke's Company. In 1670, she came up with her first work, a play ‘The Forc’d Marriage’ which was produced in London. It was followed by ‘The Amorous Prince’, in 1671.
Her third play was ‘The Dutch Lover’. Unlike her previous two attempts, Behn’s third play was not well received. Failing to make a mark, she took a break of three years. It is said that she resumed working as a spy during this time.
In 1676, she came up with her sole tragedy play, ‘Abdelazer’. However, right after ‘Abdelazer’ Behn turned to writing in her favourite and more commercially successful genre, comedy.
In 1677, she came up with the first part of ‘The Rover’. The play was super successful commercially and soon became one of her most popular works. She followed it up with a second part in 1681. The play portrayed the adventures of a small group of English Cavaliers in Madrid and Naples during the exile of future Charles II. Mistress of Charles II, Nell Gwyn played a major role in the play.
Following the success of ‘The Rover’, she made her foray into novels and brought forth an equally popular work, ‘Love-Letters Between a Nobleman and His Sister’ (1684–87). In 1687, she came up with the play, ‘The Emperor of the Moon’ which served as a forerunner to modern-day pantomime.
Continue Reading Below
In 1688, she released her best-known novel, ‘Oroonoko’. ‘Oroonoko’ dealt with the story of an enslaved African prince whom she claimed to have met in South America. The novel exploited the themes of slavery, race and gender. ‘Oroonoko’ was so well received that it established her reputation as a novelist.
In 1688, she came up with the work ‘A Discovery of New Worlds’, which was a translation of the French work titled, ‘Entretiens sur la pluralité des mondes’ by Bernard le Bovier de Fontenelle.
Behn wrote several poems in her lifetime, most of which were collected and published in ‘Poems upon Several Occasions, with A Voyage to the Island of Love’ and ‘Lycidus; or, The Lover in Fashion’. While the former was published in 1684 the latter was published in 1688.
Over her career, Behn wrote about nineteen plays, four novels and short stories. She was one of the most prolific and high-profile female writers. Her popularity was second only to Poet Laureate John Dryden.
During her time, she befriended notable writers including John Dryden, Elizabeth Barry, John Hoyle, Thomas Otway and Edward Ravenscroft
Her last known work was translation of Abraham Cowley’s ‘Six Books of Plants’. She completed the work just a few days before her death. 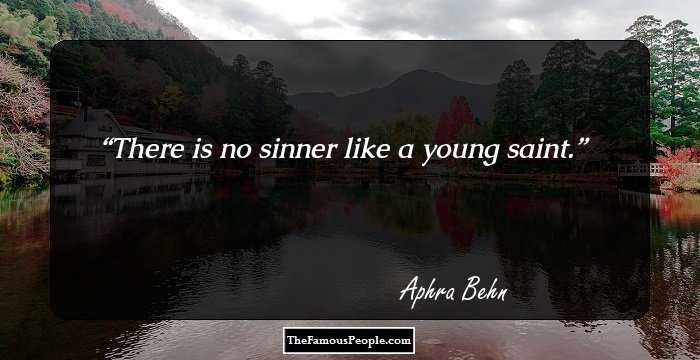 Quotes: Like, Children, Young
Personal Life & Legacy
Upon returning to England in 1664, she married Johan Behn, a Dutch merchant. Since then, she was known publically as Mrs Behn. Tragically, Johan died the following year, leaving Behn on her own.
Behn faced severe health issues during the last four years of her life. However, despite the failing health, she did not stop writing and continued to pen novels, plays, poems and short stories.
Behn breathed her last on April 16 1689. She was buried in the East Cloister Westminster Abbey. Her tombstone bears the inscription, ‘Here lies a Proof that Wit can never be Defence enough against Mortality.’
Posthumously, two of her plays, ‘The Widow Ranter’ and ‘The Younger Brother’ were performed in 1689 and 1696 respectively.
Trivia
The code name, Astrea which she used during her visit to Antwerp as a political spy was employed in her later works which were published under the same pseudonym, ‘Astrea’. 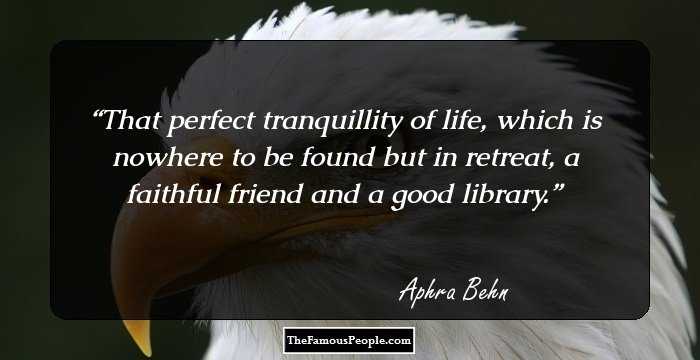 See the events in life of Aphra Behn in Chronological Order