Michael Stipe is an American singer, lyricist, and filmmaker, most famous for leading the alternative rock band R.E.M. While pursuing art studies at college, he struck chord with a record store clerk, Peter Buck, and wished to form a band. Just as the two started writing music, they were joined by Mike Mills and Bill Berry, to create an influential American rock band R.E.M. After two single releases, the band recorded their first album ‘Murmur’ which instantly connected with music lovers and was very well-received. Eventually, the band compiled a number of successful albums, before they got their first commercial breakthrough through the single ‘The One I Love’ from ‘Document’. Their two albums ‘Out of Time’ and ‘Automatic for the People’ are considered to be the band’s most successful and best albums. Some other best-seller albums from the group include ‘Green’, ‘Monster’, ‘Up’, ‘Around the Sun’, Accelerate’, and ‘Collapse into Now’. In addition to his music career, he tried his hand at acting and filmmaking as well. He launched his own production house, Single Cell, under which he produced two blockbuster films, including an Oscar-nominated flick. American People
Lyricists & Songwriters
American Men
Georgia Musicians
Male Singers
Childhood & Early Life
John Michael Stipe was born on January 4, 1960, in Decatur, Georgia, into a family of a US army serviceman.
Due to his father’s nature of job, he spent his childhood at different places, including Alabama, Georgia, Illinois, and Texas. He once resided in Germany as well.
In 1978, he finished high school from Collinsville, Illinois, and entered the University of Georgia, in Athens, Georgia, to study photography and painting. 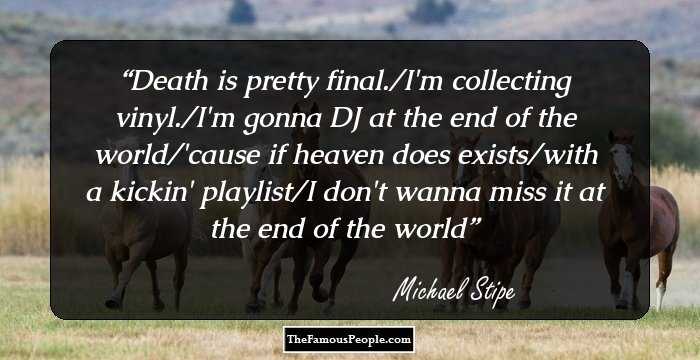 The Hottest Male Celebrities With The Best Abs
Career
Attracted by punk music, he often visited the Wuxtry record shop, where he soon befriended the store clerk and aspiring guitarist, Peter Buck, in 1980. The two decided to start a band and started writing music.
Joined by bassist Mike Mills and drummer Bill Berry, the four formed an alternative rock band, R.E.M., in 1980.
Eventually, all the band members quit school to concentrate on the band in 1980. The same year, the band performed its first concert in Athens, Georgia, which got them much recognition.
In 1981, the band released its first single ‘Radio Free Europe’ under Hib-Tone. The song garnered enough attention for the band to sign a deal with I.R.S. Records, which released its second single ‘Chronic Town EP’ in 1982.
The band’s first full-length album ‘Murmur’ was out in 1983, which got positive reviews from the critics. This was followed by their second album ‘Reckoning’ in 1984.
He debuted in acting with an unreleased 45-minute Super-8 film ‘Just Like a Movie’ in 1983.
The third album ‘Fables of the Reconstruction’ was recorded in 1985 in England, during which problems erupted between the members to an extent of a break-up.
During July and August in 1985, the group performed in Canada and across Europe, including England, France, Switzerland, Belgium, and the Netherlands. They also performed a concert on German TV show ‘Rockpalast’ in Bochum.
In 1986, the band’s fourth album ‘Life’s Rich Pageant’ released and was much appreciated and I.R.S. recorded the band’s first video release ‘Succumbs’.
Continue Reading Below
After the contract’s expiry with I.R.S., the band signed with Warner Bros. Records and recorded their first album ‘Green’ in 1988.
His friendship with Tori Amos resulted in the duet ‘It Might Hurt a Bit’ for the soundtrack of Don Juan DeMarco in 1994. It was later lined up for the 1995 Empire Records motion picture soundtrack in 1995 but the song never released.
In 1994, the band released their next album ‘Monster’, which was followed by a commercially successful world tour a year later, during which drummer Berry suffered a brain aneurysm and underwent an immediate surgery.
After the band’s next commercial hit album ‘New Adventures in Hi-Fi’, which topped the US and UK charts, released in 1996, Berry quit the band leaving the three to continue as a three-piece.
In 1998, their album ‘Up’ was out with mixed reviews. Even though it reached the top ten in the US and the UK, the album proved to be commercial failure, as the band’s market started declining in the US and increased in the UK.
Apart from his musical activities, he released a photo collection ‘Two Times Intro: On the Road with Patti Smith’ in 1998.
He launched his own film production company, Single Cell, under which he made two super-hit movies – ‘American Movie’ and ‘Being John Malkovich’, the latter received three Oscar nominations.
Some other music albums that followed were ‘Reveal’ (2001), ‘Around the Sun’ (2004), and ‘Accelerate’ (2008). Besides, a number of compiled video albums were also released.
He compiled six different cover versions of Joseph Arthur’s ‘In The Sun’ as an extended play in 2006 to raise funds for the Hurricane Katrina disaster relief.
Continue Reading Below
In 2008, he released his own ‘holiday collector edition’ of a polo shirt, in collaboration with the garment brand, Lacoste.
After the release of the band’s 15th album ‘Collapse into Now’ in 2011, the group disbanded amicably for good.
He recorded a new song ‘Rio Grande’ with Courtney Love in 2013, from the pirate-themed film ‘Son of Rogue’s Gallery: Pirate Ballads, Sea Songs and Chanteys’.
He debuted as a solo artist in December 2014 giving a surprise opening act at Patti Smith’s concert at Webster Hall, New York.
He has appeared in a handful of Hollywood movies, such as ‘Color of a Brisk and Leaping Day’ (1996), and lent his voice in ‘Olive, the other Reindeer’ (1999).
He has made various small appearances on television, some being ‘The Adventures of Pete & Pete’, ‘Sesame Street’, ‘The Simpsons’, and ‘The Colbert Report’. 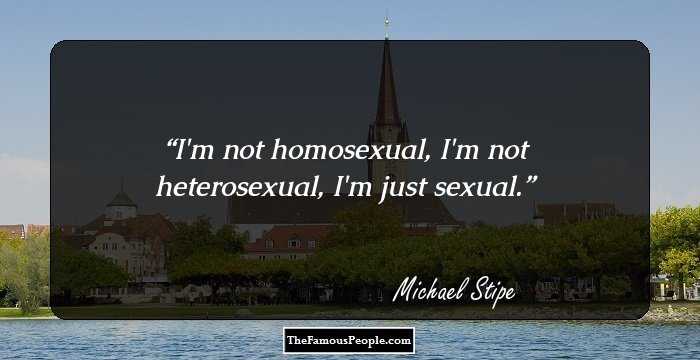 Major Works
The band got their first top hit with ‘The One I Love’ from their fifth album ‘Document’, which released in 1987. While the single topped the charts in the US, the UK, and Canada, the album was the band’s first to sell one million copies.
The band got its first most successful album with ‘Out of Time’ (1991), which topped the US and the UK charts, selling 12 million copies worldwide, while its single ‘Losing My Religion’ became one of the most popular videos on MTV.
The album ‘Automatic for the People’, recorded in 1992, was regarded as the band’s best album, reaching number one and two on the UK and the US charts, respectively.
Awards & Achievements
In 1983, the band’s first album ‘Murmur’ was awarded with the ‘Rolling Stone Critics Poll Album of the Year’, beating legendary singer Michael Jackson’s ‘Thriller’.
The album ‘Out of Time’ received the ‘Best Alternative Music Album’, while the song ‘Losing My Religion’ won the ‘Best Short Form Music Video’ and ‘Best Pop Performance by a Duo or Group with Vocal’ at the 1992 Grammy Awards.
The band was inducted into the Rock and Roll Hall of Fame in 2007. 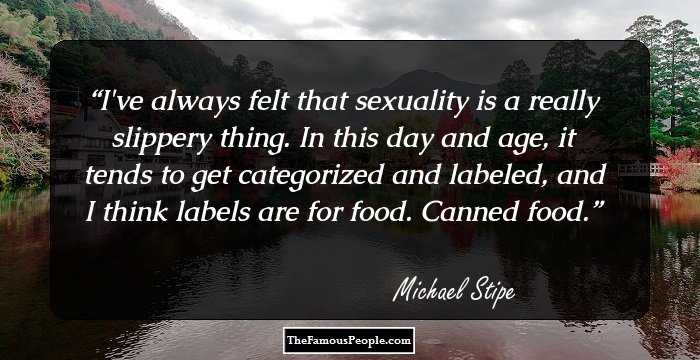 Quotes: Think, I
Personal Life & Legacy
Around 1992, there were rumors that he had contracted AIDS but Stipe said that he did not start the rumor and he did not know who did.
By the year 1994, there were questions swirling about his sexuality and he said that he was attracted to, and had relationships with, both men and women.
In 2001, he revealed that he had been in a relationship with "an amazing man" for three years.
You May Like

Quotes By Michael Stipe | Quote Of The Day | Top 100 Quotes

See the events in life of Michael Stipe in Chronological Order