Madonna, often addressed as the ‘Queen of Pop’, is one of the most popular international artists. She was born into a Catholic family and her mother was a staunch follower of her religion. After the demise of her mother, and her father’s remarriage, Madonna went through a radical change and turned into a rebel. She had an affinity towards dancing and dropped out of college to pursue a career in dancing. In a pursuit to chase her dream, she moved to New York. Life was not easy for her in New York, and to survive she had to engage in many odd jobs, which also included being a waitress and nude modelling. At the same time, she also carried on her dance training and participated in bands. Soon her talent got noticed and she got her first solo contract. Ever since the skilled performer has never looked back and has climbed the ladder of success steadily. She has created many records and registered her name in the ‘Guinness World Record’. The talented artist has uncountable awards to her credit. She has been regarded as a style icon and her some of her songs are believed to be classics. Controversies and Madonna go hand-in-hand, and this artist faces all challenges boldly and overcomes them

American People
Actresses
Musicians
Pop Singers
Lyricists & Songwriters
Childhood & Early Life:
Madonna was born as Madonna Louise Ciccone to Silvio Ciccone and Madonna Fortin on 16th August, 1958, in Bay City, Michigan. She has five siblings named Christopher, Martin, Paula, Melanie and Anthony.
She lost her mother at a very tender age and it affected her greatly. The remarriage of her father was unacceptable to her she turned into a rebel.
She attended institutions such as ‘St. Andrews School’, ‘West Junior High’, and ‘Rochester Adams High School’. She then enrolled at the ‘University of Michigan’ but in 1978, she abandoned her studies and travelled to New York to pursue her interest in dancing. 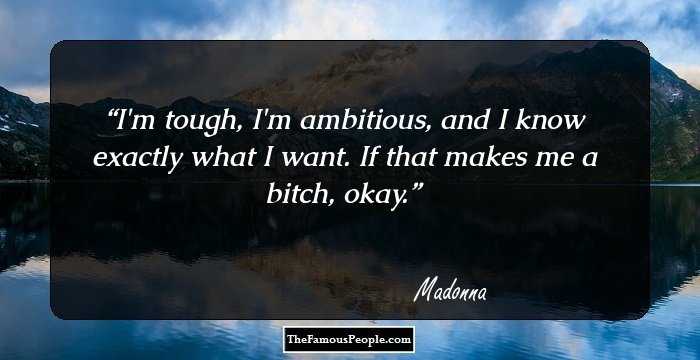 Quotes: Me, I
Continue Reading Below
Recommended Lists:

American Women
Michigan Actresses
Michigan Musicians
Leo Singers
Career
In New York, she engaged in various odd jobs such as waitress, nude art modelling and also pursued her dance training simultaneously. She became a member at the ‘The Breakfast Club’ band and later formed a band named ‘Madonna & the Sky’.
In 1979, she played a role in the film ‘A Certain Sacrifice’. In 1980s, she got a solo contract with the company named ‘Sire Records’ which is owned by ‘Warner Music Group’.
In 1982, her first solo album ‘Everybody’ was launched which topped the dance charts, and the following year, another album ‘Madonna’ was released. The albums fared well in the market and sold many copies.
The year 1984, was a major breakthrough for this artist when her album ‘Like a Virgin’ hit the music stores. This album soon became a huge success and launched Madonna as an international figure. The title track of the album retained the first position on ‘Billboard Chart’ for six weeks.
In 1985, she worked in the film ‘Desperately Seeking Susan’ and also lent her voice for the number ‘Into the Groove’ in the film. This song too was a huge hit and registered number one in U.S. dance charts.
The same year, she sang ‘Crazy For You’ for the film ‘Vision Quest’ and this too turned out to successful. Soon after, she went on her first concert tour called ‘The Virgin Tour’.
During 1986-90, this singer worked on several albums such as ‘True Blue’, ‘You Can Dance’, ‘Who’s that Girl’, ‘Like a Prayer’, and films which include ‘Who’s That Girl’, ‘Dick Tracy’, ‘Bloodhounds of Broadway’, ‘Shanghai Surprise’. During the same period, she also went on concerts tours like ‘Who’s That Girl World Tour’ and ‘Blond Ambition World Tour’.
In 1989, she signed an endorsement contract with ‘Pepsi’ company but her controversial video ‘Like a Prayer’, led to annulment of the contract.
In 1990, her compilation album ‘The Immaculate Collection’ was released and it received immense success making it the ‘best –selling compilation album by any solo artist in history’.
Continue Reading Below
In 1991, her first documentary film ‘Madonna: Truth or Dare’ was released which dealt with the incidents that occurred during her ‘Blond Ambition World Tour’. The same year, she also worked in the film ‘Shadows and Fog’ and the following year, she appeared in the film ‘A League of Their Own’
She co-founded the ‘Maverick Records’ music label in association with ‘Warner Music Group’ in 1992. The same year, she published her book ‘Sex’ which was an adult coffee table book containing erotic images of this artist; and her album ‘Erotica’ was also launched during the same time.
During 1993-99, she was engaged in movies such as ‘Body of Evidence’, ‘ Dangerous Game’, ‘ Blue in the Face’, ‘Four Rooms’ and ‘Girl 6’. She also launched some albums such as ‘Bedtime Stories’ and ‘Ray of Light’, and was part of the concert tour ‘The Girlie Show World Tour’.
In 1996, she portrayed Eva Perón in the musical drama ‘Evita’ and her award winning performance was highly acclaimed by many.
She continued to carry on her musical as well as acting career in spite of all the controversies she was surrounded with, and during the period 2000-12, she acted in movies such as ‘The Next Big Thing’, ‘Swept Away’, ‘Die Another Day’, ‘I’m Going to Tell You a Secret’, ‘Arthur and the Invisibles’.
Her albums during the same period include ‘Music’, ‘American Life’, ‘Confessions on a Dance Floor’, ‘Hard Candy’, ‘MDNA’.
In 2012, she was engaged in the concert tour named ‘The MDNA Tour’.
In 2015, her album named ‘Rebel Heart’ was released and she also embarked on a concert tour by the same name.
She is associated with a few production companies and brands such as ‘Semtex Girls’, ‘Hard Candy Fitness’, ‘Truth or Dare by Madonna’.
Continue Reading Below 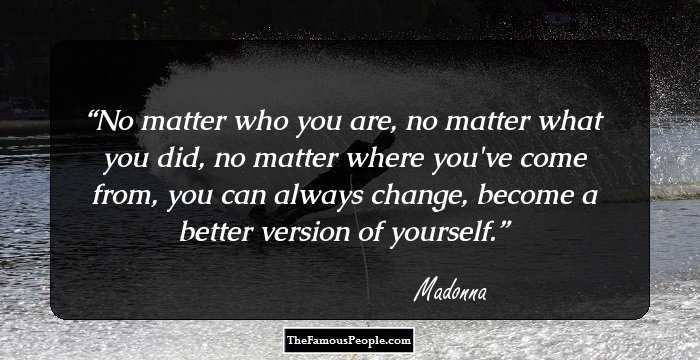 Quotes: You, Change, Yourself
Recommended Lists:

Leo Musicians
Leo Actresses
Women Singers
Leo Pop Singers
Major Works
Her album ‘True Blue’ was immensely successful containing the songs ‘Papa Don’t Preach’, ‘Live to Tell’ and ‘Open Your Heart’ which topped the ‘Billboard Hot 100’ list. The album was placed on top of the charts in more than 28 countries.
Her compilation album ‘The Immaculate Collection’ became a hit and earned her a place in the history of music by registering as the ‘best-selling compilation album by a solo artist’.
Recommended Lists:

Women Musicians
American Singers
Female Pop Singers
American Musicians
Awards & Achievements
In 1989, she was awarded with the ‘Artist of the Decade: Mega Artist’ by MTV.
This artist has been the recipient of several eminent awards for her singing as well as her acting. Her first ‘Grammy Awards’ was in the year 1992, for the ‘Blond Ambition world Tour Live’ in the ‘Best Music Video, Long Form’ category. This was followed by six more ‘Grammy Awards’ for her works ‘Ray of Light’, ‘Beautiful Strangers’, ‘Confessions on a Dance Floor’ and ‘The Confession Tour’.
During 1996-2012, this talented artist has been credited with eleven ‘Guinness World Records’ in categories such as ‘Highest grossing music tour per concert by a female artist’, ‘Highest paid female singer on the planet’, ‘Most Number-one Albums in the UK charts’, ‘Largest TV audience Super Bowl in history’.
She has been the recipient of the ‘Juno Awards’ twice for the song ‘Vogue’ and her album ‘True Blue’.
In 2006, the ‘TRL Awards’ presented her with the ‘Lifetime Achievement Award’. Two years later, this artist was inducted into the ‘Rock and Roll Hall of Fame’. 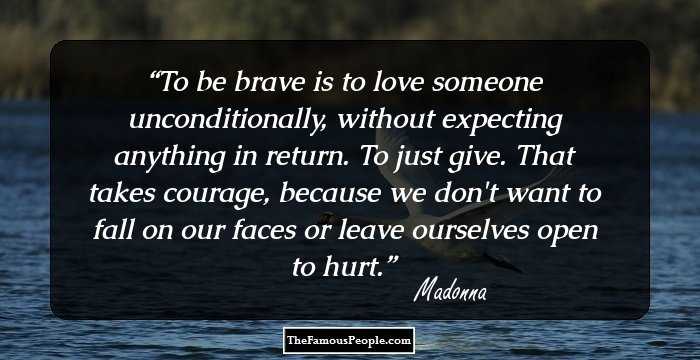 American Actresses
American Pop Singers
Actresses Who Are In Their 60s
American Women Singers
Personal Life & Legacy
On 16th August, 1985, she married actor Sean Penn but the couple divorced four years later.
During the period 1995-97, she was in a relationship with her personal fitness instructor Carlos Leon with whom she has a daughter named Lourdes Maria Ciccone Leon.
On December 2000, she married a second time to director Guy Ritchie with whom she has two sons Rocco John Ritchie and David Banda Mwale Ciccone Ritchie.
In October 2008, she and Guy Ritchie separated. Later, she adopted a daughter Mercy James from an orphanage in Malawi.
Recommended Lists:

See the events in life of Madonna in Chronological Order