Born In: Ivy, Colony of Virginia

Meriwether Lewis was an American explorer, politician and soldier. He is renowned for his role as the leader of the Lewis and Clark Expedition. The purpose of the expedition was to explore the territory of the Louisiana Purchase (Louisiana territory acquired by the United States from France in 1803) and establish trade with and sovereignty over the natives and claim the Oregon Country and Pacific Northwest for the U.S. before the European countries. This expedition also aimed at gaining valued information about geographic nature of the region by collecting scientific data and knowledge about natives including flora and fauna. After his successful expedition, he was appointed as the Governor of Upper Louisiana by President Thomas Jefferson in 1806. ‘Lewis and Clark Exposition dollars’ made of gold were minted and postage stamps were issued to honour both Lewis and Clark. Many plants and their subspecies have been named after him. Geographic locations including Lewis County, Tennessee, and Lewis County, Washington, academic institutions and several US Navy vessels were also named after him as a mark of honour. Born In: Ivy, Colony of Virginia

Arnold Schwarze...
Political Leaders #338
Explorers #51
Miscellaneous #676
DID WE MISS SOMEONE?
CLICK HERE AND TELL US
WE'LL MAKE SURE
THEY'RE HERE A.S.A.P
Quick Facts

American People
Political Leaders
American Men
Lee University
Washington And Lee University
Childhood & Early Life
Meriwether Lewis was born on August 18, 1774 in Albemarle County, Virginia, in the Lewis family estate in Locust Hill to Lt. William Lewis and Lucy Meriwether Lewis as their first son and second child.
His father served in the Continental Army as a lieutenant and died of pneumonia in November 1779 while his mother was a famous herb doctor. His parents were originally cousins. The family had good relation with Thomas Jefferson’s family since long and Jefferson knew Lewis since his childhood.
After six months of his father’s death, his mother married Captain John Marks, a retired army officer.
In May 1780 his mother and stepfather moved to Georgia along with their three children and settled in the Goosepond Community in Wilkes County, (now known as Oglethorpe County), along the Broad River. They managed a 1,000 acre plantation.
John Hastings Marks, his half-brother was born in 1785 and Mary Garland Marks, his half-sister was born in 1788.
Till 12 years of age Meriwether Lewis did not have any formal education but was interested in enhancing his skill as a hunter often venturing out for hunting with his dog at mid-night. He was an outdoorsman from a young age and would be curious about natural history. Often encouraged and taught by his mother he learnt how to collect wild herbs of high medicinal qualities.
His parents sent him to Virginia at the age of 13 where he was taught by Matthew Maury and Parsons William Douglos. Nicholas Lewis, his father’s elder brother became his guardian. He was also taught by Dr. Charles Everitt but later in 1790 shifted to Rev. James Waddell.
He graduated in 1793 from ‘Liberty Hall’ (now known as ‘Washington and Lee University’).
He managed and developed the Locust Hill estate observing and maintaining the flora and fauna. His mother along with his half siblings came back to Locust Hill following the death of John Marks in 1792. 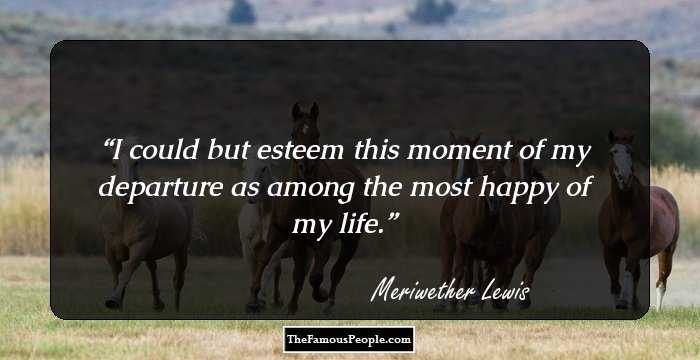 The Most Popular US Veterans
Career
In 1794 he was appointed in the Virginia Militia and sent in a detachment to control the Whiskey Rebellion.
In 1795 he was appointed as an Ensign (equivalent to present day Lieutenant) by the U.S. Army. He served the Frontier Army for six years and became a captain in 1800. William Clark his companion in the famous ‘Lewis and Clark Expedition’ was his commanding officer at Fort Greenville.
On 1st April 1801, President Jefferson inducted him as personal secretary. Lewis was a staunch Republican as President Jefferson.
Jefferson chose Meriwether Lewis to lead an expedition of the Pacific Northwest lands near the Missouri River in the west of Mississippi. The Congress gave its consent for the expedition in 1803 making it the first transcontinental military exploration initiated by the U.S. government.
Jefferson was the first person who taught him about navigation. He later went to Philadelphia to learn from skilled cartographers and astronomers.
Lewis chose Clark as his companion to share command with him in the expedition. A French-Canadian fur trader’s wife Sacagawea, who was a Shoshone Indian woman, accompanied them.
The purpose of this expedition was to explore the territory and set up commerce with the natives and establish the United States’ sovereignty over the region ahead of the European countries.
The expedition revealed that Native Americans were used to trading with European traders and were linked with global markets.
In November 1805, their expedition reached the Oregon Country (a disputed land beyond the Louisiana Purchase) and the Pacific Ocean.
Continue Reading Below
In 1806 they returned from the expedition. The success of this mission helped to strengthen the American concept of "Manifest destiny" - the idea that the United States was destined to reach all the way across North America from Atlantic to Pacific. He was rewarded 1,600 acres of land at the end of the expedition.
President Jefferson made him the governor of Upper Louisiana Territory in March 1807. His indulgence in alcohol consumption and delay to take responsibility as governor strained his relations with Jefferson. After a full year of appointment he went to St. Louis in March 1808.
On September 3, 1809, Lewis set out for Washington, D.C. to resolve issues regarding the denied payment of drafts he had drawn against the War Department in his capacity as governor of the Upper Louisiana Territory. 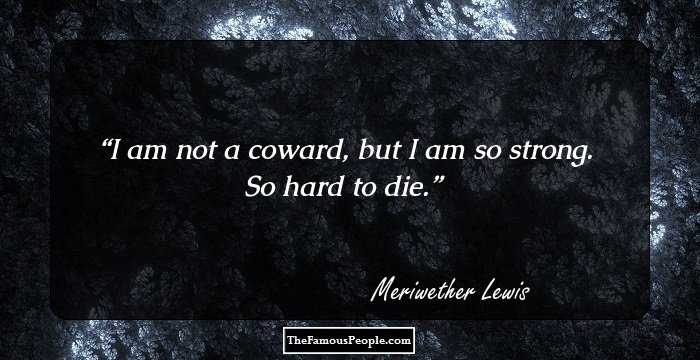 Quotes: I
Achievements
His contributions to science, the exploration of the Western U.S., and the lore of great world explorers, are considered incalculable.
The 1803 Louisiana Purchase doubled the size of the United States. Lewis along with Clark described and sketched the flora and fauna of the region and described the native inhabitants.
Personal Life & Legacy
On 11th October, 1809, at the predawn hours, Meriwether Lewis was found dead in Tennessee at the Grinder’s Inn succumbing to gunshot wounds. The cause of his death still remains a mystery. He was buried near Grinder’s Stand.
In 1848, a monument was erected over his grave by the State of Tennessee.
Trivia
To honour Lewis and Clark for their expedition, gold ‘Lewis and Clark Exposition dollars’ were minted for the ‘Lewis and Clark Centennial Exposition’.
On the occasion of the 200th anniversary of ‘Lewis and Clark expedition’, two commemorative USPS stamps, showing portraits of Meriwether Lewis and William Clark, were released on May 14, 2004.
The plant genus Lewisia, which includes the bitterroot (Lewisia rediviva), along with Lewis' woodpecker (Melanerpes lewis) and the westslope cutthroat (Oncorhynchus clarki lewisi) is named after Lewis.
Three US Navy vessels (the SS Meriwether Lewis, USS Lewis and Clark and USNS Lewis and Clark) have been named in honour of Lewis.
Recommended Lists:
Leaders #457
You May Like

See the events in life of Meriwether Lewis in Chronological Order