Daniel Boone was an 18th century American explorer best known for his exploration and settlement of what is now Kentucky. His explorations and exploits as a frontiersman catapulted him to the status of a folk hero—one of the first ones to emerge from the United States. He was born into a family of Quakers who had been persecuted in England for their dissenting beliefs and had thus moved to Pennsylvania. As one of the several children in his family, Daniel started hunting at the age of 12 to be able to gather enough food for his large family. Even though the children in his family were provided good education, his interests lay more in hunting and exploring than in reading and writing. He became a skilled hunter and this kindled in him a love for adventure. Hunting also made him familiar with travelling and exploring newer routes in the wilderness. Even though the Quakers were primarily pacifists, he had served during the Revolutionary war as a militia officer. He participated in several expeditions including the military expedition that was part of the French and Indian War in which he served as a wagoner for Brigadier General Edward Braddock during his army's defeat at Turtle Creek. Eventually he led his own long hunting expedition during the course of which he explored the place which is now Kentucky American People
American Men
American Explorers
Scorpio Men
Childhood & Early Life
Daniel Boone was born on 2 November 1734 in a log cabin in Exeter Township, near Reading, Pennsylvania. He was of English and Welsh ancestry, and his family had migrated to America from England. His father, Squire Boone, worked primarily as a weaver and a blacksmith, and came from a Quaker family. His mother Sarah Morgan also came from a family of Quakers. Daniel was the sixth of eleven children.
Daniel Boone spent his early years on the edge of the Pennsylvania frontier where he learned to hunt as a young boy. He was just 12 when he started using a rifle and would venture into the forests to hunt for food to feed his large family.
He became a very skilled hunter and is said to have shot a panther through the heart as it leaped at him. Even though the validity of the claim is questioned, the story undoubtedly added to his image as a fearless individual.
From a young age he was more interested exploring the woods and roaming the wilderness than in receiving a formal education. Even though he was tutored at home by some family members, he did not receive much formal schooling. However, he loved to read, and the ‘Bible’ and ‘Gulliver's Travels’ were his favorites. 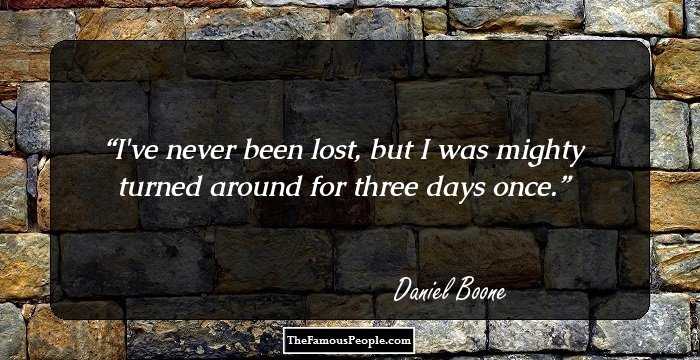 The Hottest Male Celebrities With The Best Abs
Career
Daniel Boone grew up to become a wagoner and a blacksmith. He joined General Edward Braddock, commander in chief of British forces in North America, as a wagoner in 1755. During the French and Indian War, he participated in Braddock's attempt to capture Fort Duquesne.
During this time he became acquainted with John Findley, a hunter, and through his interaction with him, learned about the Kentucky wilderness which greatly influenced him.
The Battle of the Monongahela was a fateful one for him as the British forces were badly defeated and the baggage wagons were assaulted by the Indian troops. Boone narrowly escaped death and fled for his life on horseback.
On returning home he got married and settled into a domestic life. Soon his family grew to include several children. During this time, he worked as a market hunter and trapper, collecting pelts for the fur trade.
Often he would embark on long hunting expeditions into the wilderness, some of which would last months. He accumulated hundreds of deer skins, and also hunted beavers and otters for fur.
He led his first expedition in 1767. The expedition, a long hunting trip with one of his brothers, reached Kentucky and worked its way westward as far as Floyd County.
Around this period he met John Findley again, and Findley encouraged Daniel Boone to further explore the areas around Kentucky.
Thus in May 1769 Boone led another expedition, this time accompanied by Findley and a few other men. He led the team to discover a trail to the far west though the Cumberland Gap.
In 1775, he led the first group of colonists to Kentucky, acting as an agent for Richard Henderson's Transylvania Company. Then he brought his family to the Kentucky settlement and became its leader.
His misfortunes started with the outbreak of the American Revolutionary War following which he struggled to protect his land settlement. After a few years he was forced to leave the Kentucky settlement he had worked so hard to protect.
Eventually he moved to Missouri where he spent his final years in the company of his numerous children and grandchildren. He continued to hunt and trap for as long as his health allowed. 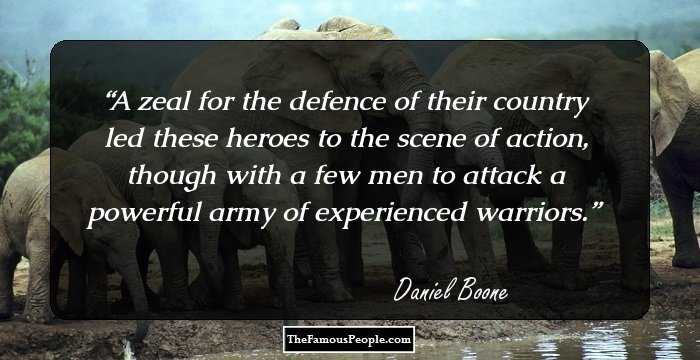 Personal Life & Legacy
On 14 August 1756 he married Rebecca Bryan, a neighbor whom he had started courting in 1753. The couple went on to have ten children. In spite of having little formal education, Rebecca was a very resourceful and talented woman. She was an experienced community midwife, leather tanner, sharpshooter and linen-maker. She was also a kind-hearted woman who took in the orphaned children of her deceased relatives and raised them along with her own.
Daniel Boone lived a long, happy and adventurous life and died of natural causes at his home in Femme Osage Creek, Missouri, on 26 September 1820 at the age of 85.
You May Like

Quotes By Daniel Boone | Quote Of The Day | Top 100 Quotes

See the events in life of Daniel Boone in Chronological Order