At a time when African-Americans were not permitted to voice their sentiments related to racism and equality, Marion Barry became one of those foot warriors and instruments of a new revolution. Any intimation of opposition was usually met with brute force, lynching, beatings and sometimes, even cool-blooded murder. Dr. Martin Luther King and his foot soldiers, including Barry, began boldly defying dogmatists and racists around America, head on. Barry became a successful American Democratic politician and is best known for his role in the civil rights movement. While studying for his doctorate at Tennessee University, he became a founding member of the Student Nonviolent Coordinating Committee (SNCC) and was made its national chairman and president. For his contributions towards the betterment of his people, Barry was also elected as the mayor of the District of Columbia, before he was sentenced for six months in prison after being sentenced on a drugs charge. After serving as a business organizer, to a school board associate and to mayor, for over two decades, Barry typified all that is good and evil about urban politics in the United States of America. Barack Obama
Political Leaders #1398
Leaders #1960
DID WE MISS SOMEONE?
CLICK HERE AND TELL US
WE'LL MAKE SURE
THEY'RE HERE A.S.A.P
Quick Facts

Marion Barry was born in Itta Bena, Mississippi, and was the third of his ten siblings. His father passed away when he was only four and only a year later, his mother moved to Memphis, Tennessee, and remarried.

From a very young age, Barry did a number of jobs to make ends meet, including selling newspapers, picking cotton, serving as a waiter to working in a departmental store.
After he completed his high school education, he attended LeMoyne College and graduated in 1958. He earned an M.S. degree in organic chemistry from Fisk University and was also a member of the Alpha Phi Alpha federation.
After graduating from Fisk University, he joined the American civil rights movement and was elected as the president of the ‘Student Nonviolent Coordinating Committee’.
During this time, he was pursuing a doctoral program in chemistry at the University of Tennessee in Knoxville and was the only African-American in his batch.
In 1965, he moved to Washington D.C. and was intensely involved in coordinating the street protests during bus fare increase. Around this time, he discovered his true passion for working towards securing the rights of his fellow African-American brothers and soon enough, he began working towards their betterment.
In 1967, he quit SNCC and co-founded Pride, Inc., along with his wife, to provide job training for unemployed black people. 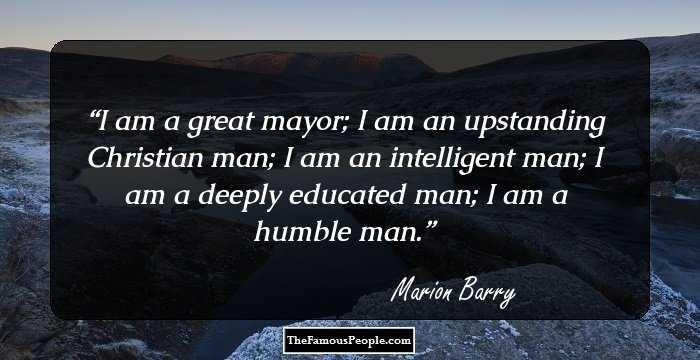 After the 1968 Washington D.C. riots, Marion Barry arranged for provisions for his fellow African-Americans. He also started initiating change in perception towards black people in Washington D.C. by becoming the board member of the city’s Economic Development Committee.

In 1971, he announced his candidacy for at-large member of the school board in 1971, and defeated his opponent with 58% votes. After being seated as the board member the following year, he organized the school’s finances and advocated a larger budget for higher education.

In 1974, Marion Barry was elected to Washington’s first elected city council and while serving as the council member, he was nominated as the chairman of the District of Columbia Committee - a position he served till 1979.

He was shot on March 9, 1977 by the fundamentalists, Hanafi Muslims. After a quick recovery, he fell out of political favor in the 1978 election, but won the Democratic mayoral primary election, defeating Arthur Fletcher.

In the first four years of his tenure, he brought changes in the sanitation of the city, stabilized the city’s finances and made summer employment available for graduates. In his first term itself, the US government saw a surplus, but the unemployment and the crime sky-rocketed.
In 1982, he ran for his second term and won with over 58% of the votes cast in his favor. In this period, he assuaged the fiscal problems and brought a drastic change to curb the crime rates in the city. However, the following year, he struggled with a $110 million deficit in the city’s finances.

After being elected for a third term as the mayor in 1986, his health began deteriorating due to consumption of cocaine and alcohol. He was investigated by officers for six years on suspicion of illegal drug possession and on January 18, 1990, he was arrested in a sting operation by the FBI for the possession of ‘crack’. This was broadcasted live on television and as a result of this public humiliation, he decided not to seek re-election as mayor.

He was released from prison in 1992 and two months later, filed papers to run for the Ward 8 city council seas in that year’s election.

Marion Barry formally announced his candidacy for mayor on May 21, 1994. He once again defeated his adversary, winning 70% of the votes and was formally re-elected as D.C.’s mayor for the fourth term from 1995 to 1999.

He declined to run for the fifth term and was eventually succeeded by city CFO, Antony A. Williams.

After he left office as the mayor, he started working as a consultant for an investment banking firm and soon announced that he will be running in the Democratic primary for the Ward 8 council seat, which he later won. After successful four year tenure, he filed for re-election once again in 2008. 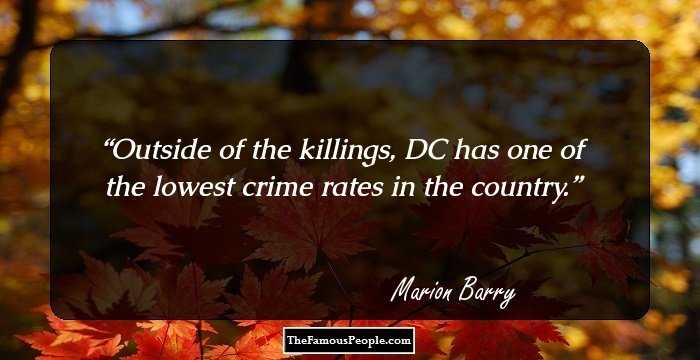 Major Works
As the mayor of Washington D.C., Marion Barry canvassed dynamically to cut government waste, lessen infant mortality, provide accommodation and employment for the city’s underprivileged and also make occupation available for all African-American graduates. During his tenure as the mayor, he made sure that Washington regained its fiscal condition.
Personal Life, Legacy & Death

Marion Barry married Mary Treadwell, who was the co-founder of ‘Pride, Inc.’ in 1972. They separated five years after their marriage.

Barry got married to Effi Slaughter in 1978, and divorced her in 1993. The couple had one son, Christopher Barry.

Marion Barry died on November 23, 2014, at United Medical Center in Washington, D.C., from cardiac arrest. He was 78.

Trivia
In 2009, this American Democratic politician and the mayor Washington D.C., was charged with stalking.
You May Like

See the events in life of Marion Barry in Chronological Order