Maria Theresa is known as the Empress who ruled the Holy Roman Empire and was the de facto ruler of much of Europe throughout her lifetime. As the eldest surviving child of the Holy Roman Emperor Charles VI, Maria was not originally expected to ever inherit her father's throne. But when her father failed to produce any male children, Maria was formally trained in statecraft and the arts of governance. When her prospective groom, Leopold Clement, died from an illness, she eventually married his younger brother. After Maria's father died, several neighboring kings took the opportunity to invade her lands. Although she started off with a depleted treasury and limited leadership experience, Maria Theresa soon proved her mettle by doubling the empire's income and raising a large standing army. After a series of disastrous wars destroyed half of Europe, Maria found that her empire had emerged relatively unscathed. Using her intellect and education, Maria initiated a renaissance in her empire and implemented several important educational and judicial reforms. After successfully marrying off her surviving children to the royal houses of Europe, Maria Theresa died peacefully in her bed, one of the most powerful female monarchs of the early modern era.

Tarabai
DID WE MISS SOMEONE?
CLICK HERE AND TELL US
WE'LL MAKE SURE
THEY'RE HERE A.S.A.P
Quick Facts

Austrian People
Austrian Empresses & Queens
Women Historical Personalities
Austrian Historical Personalities
Austrian Female Historical Personalities
Childhood & Early Life
Maria Theresa Walburga Amalia Christina was born on May 13, 1717. Maria was the oldest surviving child of the Holy Roman Emperor, Charles VI, and Elisabeth Christine of Brunswick-Wolfenbuttel.
Maria's inheritance of her father's throne was based on a royal decree entitled 'The Pragmatic Sanction'. Maria's father had to fight several wars during her childhood to force neighboring nations to honor the 'Pragmatic Sanction'.
Continue Reading Below
Career
When she was 10 years old, Maria became engaged to be married to Leopold Clement of Lorraine but he died of smallpox before arrangements for their nuptials could be finalized. Maria began assisting her father's council meetings when she was just 14 years old.
In 1736, after an impressive performance during the ‘War of the Polish Succession’, Leopold Clement's younger brother, Francis Stephen, was awarded Maria's hand in marriage.
Charles VI died on October 20, 1740. Maria Theresa, as his eldest surviving child, inherited his throne upon his death.
Because of her father's poor choices, Maria began her reign unable to pay her army and her government deeply in debt. Just months after her coronation, Maria had to fend off an invasion by King Frederick II of Prussia of the Duchy of Silesia. Initially, Maria's forces were badly routed but by early 1741 they had successfully repelled the Prussian invasion.
In 1741, Maria used a legal technicality to make her husband Francis Stephen co-ruler of Austria and Bohemia so that he could later be eligible for the title of Holy Roman Emperor. Because she was female, Maria Theresa could never officially hold the title of Holy Roman Emperor.
Charles Albert of Bavaria successfully invaded and conquered several portions of Maria's empire. On January 24, 1742, Charles Albert was elected as the Holy Roman Emperor, denying Maria's husband a chance at the title.
By 1743, Maria's forces had made significant advances in regaining her lost territory. On May 12, Maria was crowned Queen of Bohemia, just a year after losing the territory to Charles Albert of Bavaria.
Charles Albert continued to wage war against Maria but his resistance came to an end when he died in early 1745. A few months later, Maria's husband Francis Stephen was elected Holy Roman Emperor.
In 1756, Frederick II of Prussia invaded Saxony, which began the Seven Years' War. Austria aligned itself with France and Russia against an alliance of Prussia, Portugal and Great Britain.
Continue Reading Below
After several long years of fighting, the war ended with a net loss for France. Maria, however, found that her empire was in the same position at the end of the war as at the beginning.
In 1765, Maria's husband Francis died on the same weekend that their son Leopold was celebrating his marriage. Maria's son Joseph immediately became the Holy Roman Emperor but would rule as her co-regent until her death.
In 1775, Maria implemented mandatory elementary education throughout her empire. She based the educational system on the one created by her arch rival, Frederick II of Prussia.
In 1780, Maria fell ill and a week later, on November 28, she was pronounced dead by her personal physician.
Major Works
Maria Theresa was the Holy Roman Empress and Queen Consort of Germany from September 13, 1745 to August 18, 1765. She was known for reforming the economy and educational system of her empire.
Personal Life & Legacy
After the untimely demise of Leopold Clement, Maria Theresa exchanged the nuptial vows with Leopold’s younger brother, Francis Stephen. On February 12, 1736, the two married in an elaborate royal ceremony.
Maria Theresa gave birth to 16 children. However, only 13 of her children survived infancy. As a member of the House of Habsburg, Maria Theresa's relatives are found in nearly every European royal court.
Trivia
This empress was born just an hour after her older brother Archduke Leopold died. Had he lived, Leopold would've inherited the crown.
Following family tradition, all of Maria's daughters were given the name 'Maria'. In 1770, Maria married her youngest daughter, Maria Antonia, to Louis, the future king of France. Changing her name to Marie Antoinette, the young queen would serve a memorable role in the French Revolution.

See the events in life of Maria Theresa in Chronological Order 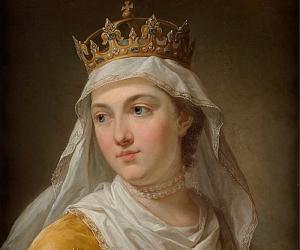