Advanced Search
This profile is about the feted life of the epoch’s most powerful artist - Marcel Duchamp. He is regarded as one of the colossi of the 20th century, who transformed the progression of modern art, influence by the Dadaist and Surrealist movements. Graphic arts and performing arts were never the same again because he was instrumental in shifting the focus of a regular observer of art from something purely visual to something more complex, more psychological. He circumnavigated the prosaic and romantic to uncover the concepts outlining art itself. His familiarity with the subject and prose style, waggishness and satire, made him look like a picture-perfect writer during his time. Some of his works that caused sensations are ‘Nude Descending a Staircase, No.2’, ‘Bottle Rack’, ‘Fountain’ and ‘The Large Glass’. During his tenure as an artist, he created the ‘Societe Anonyme’ along with influential personalities like Man Ray and Katherine Dreier. Apart from his works as an artist, he was a keen chess player and was even seen in the film ‘Entr’acte’, where he was playing chess with Man Ray. He learned, studied and perfected this game that he so loved, for the rest of his life. Auguste Rodin
28th July In History
DID WE MISS SOMEONE?
CLICK HERE AND TELL US
WE'LL MAKE SURE
THEY'RE HERE A.S.A.P
Quick Facts

French Celebrities
Chess Players
Cubist Painters
French Men
Male Sculptors
Childhood & Early Life
Marcel Duchamp was born on July 28, 1887 to Eugene and Lucie Duchamp in Blainville-Crevon Seine-Maritime in France. Three of his other siblings also became successful painters and sculptors in their own right.
At the age of 8, he enrolled to the Lycee Pierre-Corneille, where for the next eight years; he went through a rigorous process of intellectual/academic development. Although he was not a brilliant student, his strengths lay in the subjects like mathematics and drawing.
After a winning a prize for drawing, he was influenced to pursue art as a career. He followed in the footsteps of his brother, Jacques Villon, whose artistic styles he wanted to emulate.
By the age of 14, he transformed his drawings into masterpiece works, with the usage of watercolors for landscapes etc.
His early works depict Post-Impressionist styles as well as classical techniques. From 1904 to 1905, he studied art at the Academie Julian, but was more absorbed in playing billiards than attending classes. 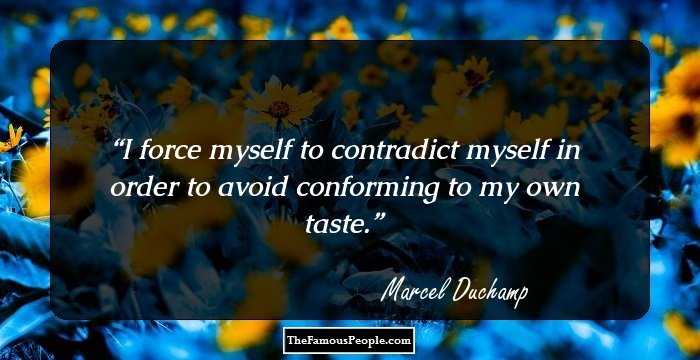 Quotes: I
Continue Reading Below
Career
In 1905, he was compulsorily made to enroll for military service and at the time, he worked for a printer in Rouen. It was here, he learned typography and printing processes, which he would use for his later works.
In 1908, his works were displayed at the ‘Salon d’Automne’ and the next year at the ‘Salon des Independants’.
In 1911, Duchamp and Jacques accommodated a discussion group which came to be known as the ‘Puteaux Group’. This included the members Fernand Leger, Picabia, Juan Gris and Albert Gleizes.
He painted ‘Coffee Mill’, a machine painting in 1911, which he presented to his brother Raymond Duchamp-Villon. The same year he also painted, ‘Portrait of Chess Players’, which was pregnant with Cubist frames in manifold perceptions.
1912 proved to be an extremely productive year for Duchamp as it stirred both awe and controversy. His best-known painting, ‘Nude Descending a Staircase, No. 2’ induced significant controversy.
He was to showcase this painting at the ‘Salon des Independents’, but the jurist, Albert Gleizes asked him to remove the painting or to change the title to something else. Duchamp refused and took his painting back and never really involved himself in groups after that.
The painting was later submitted to the ‘Armory Show’ in New York, in 1913. This exhibition hosted painters from America and all around the world. Even there, the ‘Nude’ became the center of attention and controversy because the Americans were more accustomed to seeing ‘realistic art’ than what was in front of them.
In 1912, he stayed in Germany for 2 months, and during this time, he began his work for ‘The Large Glass’- a piece that would take a little over 10 years to complete.
He attended a stage performance the same year that radically influenced his artistic style and inspired him to begin sketches of ‘The Bride Stripped Bare By Her Bachelors, Even’ (The Large Glass), in 1913. The actual work for this art piece would begin only two years later.
Continue Reading Below
In 1913, he disconnected himself from painting circles and became a librarian at the ‘Bibliotheque Sainte-Genevieve’. He then began working on art-science experiments and ended up making one of his most prized pieces, ‘3 Standard Stoppages’.
In 1914, he created one of his first ‘readymade’ works called ‘Bottle Rack’, which was a bottle dehydrating rack. The following year, he created another one of his works using a snow shovel, which was named as ‘Prelude to a Broken Arm’ or ‘Advance of the Broken Arm’.
At the onset of World War I, Duchamp immigrated to the United States in 1915, having collected enough funds from the sale of his controversial works, ‘Nude’. The moment he set foot on American soil, he was welcomed like a celebrity.
During his time in the United States, he befriended Katherine Dreier, Beatrice Wood, Man Ray and other avant-garde figures.
In 1917, he became widely known for his Dadaist work, ‘Fountain’, which was a porcelain urinal. This was to be unveiled at the ‘Society of Independent Artists’ but the jury refused to spectacle such a piece. This enraged the Dadaists, and led Duchamp to quit from the panel of the Independent Artists.
In 1919, he made a parody on the Mona Lisa who was adorned with a goatee and a mustache. This is widely regarded as one of his scandalous works.
In 1920, he formed the ‘Societe Anonyme’ with Man Ray and Katherine Dreier. This group would organize modern exhibitions, arrange for lectures and collect modern artworks through the 1930s.
In 1920, he built a kinetic work, ‘Rotary Glass Plates, Precision Optics’, which created an optical illusion when a motor would spin shards of rectangular glass on tinted portions of a circle.
In 1923, he completed his famous work, ‘‘The Bride Stripped Bare By Her Bachelors, Even’. He also moved back to Paris the same year and built another optical device based on the earlier one, ‘Rotary Demisphere, Precision Optics.
Continue Reading Below
In 1923, he was no longer an active artist. His main interest was chess, which he studied and wanted to pursue. The following year, he was seen alongside Man Ray, playing chess in the film, ‘Entr’acte’.
From 1928 to 1933, he was a regular at Chess Olympiads and reached the pinnacle of success in the game. However, he soon realized that this was not his true calling and his participation in chess events declined.
In 1932, he published, ‘Opposition and Sister Squares are Reconciled’ along with chess theorist, Vitaly Halberstadt.
In 1935, his work, ‘Rotoreliefs’ was set up in a booth at an Inventor’s show in Paris and although this venture did not earn him any profits, many optical scientists believed it could be of use to them.
Although he was not a very active artist anymore, he continued to collaborate with Surrealists for his works. He organized the 1938 International Surrealist Exhibition at the Gallerie des Beaux-arts, in Paris.
Towards the end of his life, he began working on his last major work, ‘Etant donnes’, which featured a nude woman lying on her back, with her hand holding a gas lamp in the backdrop. He worked on this art piece from 1946 to 1966.
During this time, he also founded the ‘Oulipo’, a literary group and held this his first retrospective exhibition at the Pasadena Art Museum 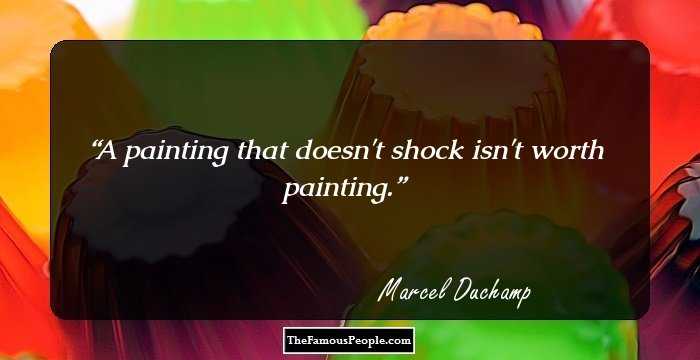 Major Works
In 1912, he created one of his most controversial masterpieces; ‘Nude Descending a Staircase, No.2’. It is a Modernist classic painting and is regarded as one of the most important examples of Modernist art of its time. It became such a famous piece of work that there are songs, albums and plays based on the painting including, ‘Naked Girl Falling Down the Stairs’ by the Cramps, ‘Dude Descending a Staircase’ by Apollo 440 and the play, ‘Interrogating the Nude’, respectively.
‘The Bride Stripped Bare by Her Bachelors, Even’, also known as ‘The Large Glass’ was made from 1915 to 1923. This work was made using lead foil, dust and fuse wire on two sheets of glass. This is considered one of his major works for the duration it took to finish and is one of the first few pieces of his ‘readymade’ works. Today, it is displayed in the Philadelphia Museum of Art and a duplicate is kept in a museum in Japan.
Personal Life & Legacy
In 1927, he married Lydie Sarazin-Lavassor and divorced her after six months. Following his ex-wife’s death, his relationship of 20 years with Mary Reynolds went public and the duo remained together, until her death in 1950.
In 1957, he married Alexina Sattler, who stayed with him until his death.
After dining with his friends, Man Ray and Robert Lebel on October 2, 1968, he passed away all of a sudden, just as he was retiring for the night. He was interred at the Rouen Cemetery, in Rouen, France.
The Prix Marcel Duchamp Award, which was established in his honor in 2000, is now presented to young artists by the Centre Georges Pompidou.
In 2004, his work, ‘Fountain’ was evaluated by a panel of prominent artists and historians as one of ‘the most influential artwork of the 20th century’. Many of his original artworks still exist today and many are lost. There are even duplicates of his art-works that can be found around the world. 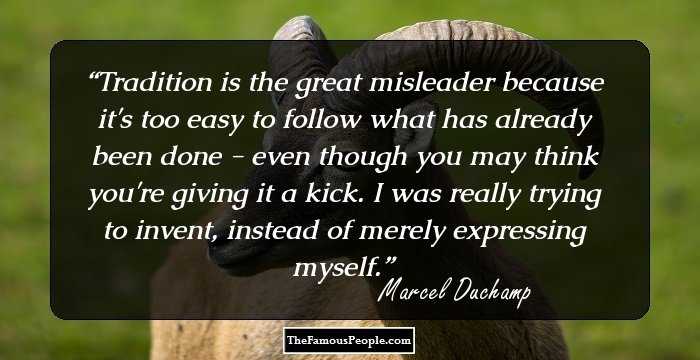 Quotes: You, Think, Trying, Tradition, I
Trivia
This famous French-American painter, sculptor and chess player used the pseudonym ‘Rrose Selavy’ to pose for a series of photographs as a woman for his close friend, Man Ray.
Recommended Lists:
Sportspersons #1274
Artists & Painters #33

Quotes By Marcel Duchamp | Quote Of The Day | Top 100 Quotes

See the events in life of Marcel Duchamp in Chronological Order