Brassai was a Hungarian photographer, sculptor, writer and filmmaker. He gained recognition for his work on Paris nightlife during the 1930s. Brassai used to often wander through the dark and infamous streets and cafes of Paris, which impressed him largely and persuaded him to think about photography as a serious career, contrary to his disliking during his early years as a journalist. He became one of the most influential photographers of the 20th century, thanks to his classic and dramatic street photographs taken during the deserted hours of ‘The City of Light’, either at night or during fog, a condition that was rare during that era. When most of the Hungarian artists were immigrating to Paris during the World Wars, he was one among the many who exhibited their talent and rose to international fame, initially in France and later across the globe. Apart from being a distinguished photographer, he displayed his talent as a sculptor, writer and filmmaker as well, receiving accolades in all areas. This Hungary-born French artist released his pictures in the form of two photo-books, which became masterpieces of his exceptional works. Besides, he authored a large number of books and articles in French, which were later translated and published in English. Gustave Courbet
Artists #440
Sculptors #106
Artists & Painters #586
DID WE MISS SOMEONE?
CLICK HERE AND TELL US
WE'LL MAKE SURE
THEY'RE HERE A.S.A.P
Quick Facts

French Celebrities
Hungarian Celebrities
French Men
Hungarian Men
French Artists
Male Sculptors
Childhood & Early Life
Originally named Gyula Halasz, Brassai was born on September 9, 1899 in Brasso (Brasov), Transylvania, Austria-Hungary (now Romania) to Hungarian father and Armenian mother.
His family relocated to Paris, when he was three, where his father worked as a French literature professor at the Sorbonne.
He attended the Hungarian Academy of Fine Arts, Budapest, where he studied painting and sculpture, after which he served in the cavalry regiment of the Austro-Hungarian army during World War I. 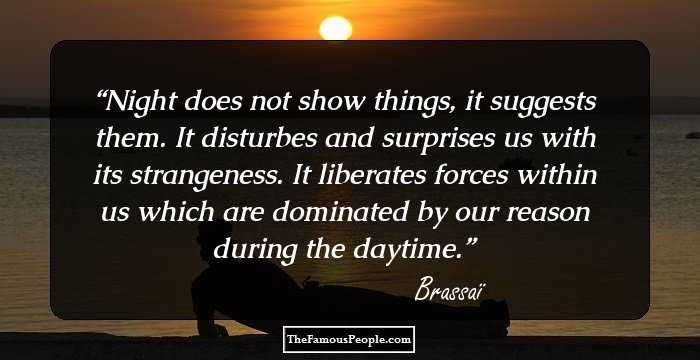 The Best Black Actresses Of All Time
Career
He went to Berlin in 1920 to work as a journalist for Hungarian papers – Keleti and Napkelet. During this period, he joined Berlin-Charlottenburg Academy of Fine Arts to further enhance his skills.
He befriended Lajos Tihanyi, Bertalan Por and Gyorgy Boloni at the academy, who later went to Paris and gained recognition in the Hungarian art world.
He traveled back to Paris in 1924 and settled there for the rest of his life, excelling in painting, sculpting, photography and journalism.
He started reading books of Marcel Proust to learn the French language and became a journalist to support his living, while residing with artists at the Montparnasse Quarter.
He found friends in writer Henry Miller, Leon-Paul Fargue and poet Jacques Prevert, who played a major role in shaping his career and life.
Despite having a disliking for photography, he had to use it in his journalistic assignments and generated interest only when he started wandering the deserted streets of Paris at night, viewing its pristine beauty.
The tawdry collection of prostitutes, rag pickers, apaches, madams, transvestites, petty criminals and street cleaners fascinated him so much that he began capturing the essence of the city through his lens.
He captured a number of his artist friends and popular writers on the canvas, some being Alberto Giacometti, Henri Matisse, Salvador Dali, Jean Genet, Pablo Picasso, and Henri Michaux.
His photographs also revealed the lighter side of the city life, including ballet, grand operas, high society and intellectuals, apart from sheer dark side.
Continue Reading Below
He soon grew popular among the Hungarian circle in Paris and continued earning income through commercial photography, especially for the American magazine ‘Harper’s Bazaar’.
He served as one of the founding members of the Rapho agency, launched by Charles Rado, in1933, in Paris.
During 1943-45, he took up drawing, sculpture and poetry, setting photography aside due to German penetration, and resumed it only in the late 1960s, penning periodicals for ‘Picture Post’, ‘Verve’ and ‘Minotaur’.
He published his first book of drawings ‘Trente dessins’ (Thirty Drawings) in 1946, which included a poem written by French poet Jacques Prevert.
In 1948, his works were displayed in an exclusive show at the Museum of Modern Art, New York City. Subsequently, they were exhibited at George Eastman House, Rochester, New York, and Art Institute of Chicago, Illinois.
He took up sculpting figures in stone and bronze, after he stopped clicking photographs in 1961, which included designs derived from his collection.
He wrote about 17 books and articles, like ‘Histoire de Marie’ (1948), ‘Henry Miller, grandeur nature’ (Henry Miller: The Paris Years, 1975), ‘The Secret Paris of the 30’s’ (1976), and ‘Artists of My Life’ (1982).
His article ‘Letter to My Parents’ and book ‘Conversations with Picasso’ were translated and published by the University of Chicago Press in 1997 and 1999, respectively.
Major Works
He published his first book of photographs in 1933 ‘Paris de nuit’ (Paris by Night), which was considered a masterpiece unearthing the city’s hidden secrets, earning him the title ‘the eye of Paris’ by Henry Miller.
His second book ‘Voluptes de Paris’ (Pleasures of Paris), published in 1935, brought him international acclaim.
Awards & Achievements
His movie ‘Tant qu’il y aura des betes’ was awarded with the Most Original Film, at the prestigious Cannes Film Festival, in 1956.
He received several awards for his cult pieces of photography, including Gold Medal for Photography at the Venice Biennale (1957), Chevalier des Arts et des Lettres (1974), and Chevalier de l’Order de la Legion d’honneur (1976).
In 1978, he was honored with the first Grand Prix National de la Photographie award, in Paris.
Personal Life & Legacy
He married French woman, Gilberte Boyer, in 1948, after which he took up French citizenship in 1949, after being stateless for many years. His wife supported him throughout his photography career, by developing negatives in the dark room and describing his subjects and personalities.
He passed away on July 7, 1984, in Beaulieu-sur-Mer, Alpes-Maritimes, south of France, aged 84. He was laid to rest in Cimetiere du Montparnasse, Paris.
In 2000, around 450 of his works were put on display in a retrospective exhibition at the Centre Georges Pompidou, Paris, by his widow, Gilberte.
Trivia
He took upon the name Brassai from his birthplace, which literally means ‘someone who belongs to Brasov’, during the period when he used to capture the beauty of nightlife of Paris.
Recommended Lists:
Photographers #83
You May Like

See the events in life of Brassaï in Chronological Order