Mahmoud Ahmadinejad served as the sixth President of the Islamic Republic of Iran and was one of the most prominent leaders of the Alliance of Builders of Islamic Iran, a coalition of conservative political groups. He served as President from 2005 to 2013. Born in Aradan, Iran, Ahmadinejad hailed from a poor Shia family. He went on to attend the Iran University of Science and Technology, where he became politically active. He served as the Governor of Ardabil and the Mayor of Tehran, before he was elected as the President of Iran. His rather controversial stand on Iran’s nuclear power during his presidential tenure created tension between Iran and the major countries of the world.. He was viewed with hostility in his home country for his economic policies, disrespect for human rights and his open hatred towards certain countries. He also became the first president of the Islamic Republic of Iran to be questioned by the country’s parliament on domestic and foreign policy issues. He holds a doctorate in 'civil engineering and traffic transportation planning'. He is known for his confrontational and outspoken nature. On the positive note, his policies allowed women to attend major sporting events, which they were not able to do before. Iranian People
Political Leaders
Iranian Men
Male Leaders
Scorpio Leaders
Childhood & Early Life
Mahmoud Ahmadinejad was born on 28 October 1956, in Aradan, Iran, to Ahmad, a Shia barber, and grocer, who used to teach the Quran. His mother, Khanom is believed to have been one of the direct descendants of the Islamic prophet Muhammad.
He joined the Iran University of Science and Technology as an undergraduate student of civil engineering. In 1977, he graduated from the same university with a PhD in 'transportation engineering and planning'.
During his period of study at the Iran University, he became politically inclined. He covertly circulated the propaganda magazine 'Jiq va Dad', which was an anti-Shah publication.
He became a member of the Office for Strengthening Unity, an Iranian student group that aimed at helping students cope against other leftist student groups. 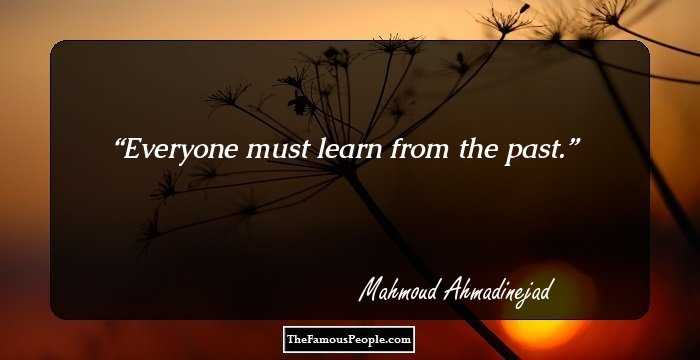 The Best Black Actresses Of All Time
Career
In May 1993, he took office as the Governor of Ardabil, a province in Iran. However, when Mohammad Khatami came to power, he was taken off from his post, after which he started teaching for a living.
In 2003, he officially took office as the Mayor of Tehran. During his tenure, he made many reforms, laying emphasis on religious matters. He also stressed on traffic matters and encouraged charity.
In 2005, he contested for the office of the President of Iran and defeated the former President Akbar Hashemi Rafsanjani. That year, he took office as the sixth President of Iran.
After his win, he became an international political figure and his stand on Iran’s right to develop nuclear power created controversy. He insisted that Iran’s nuclear program was for peaceful purposes and Iran was fully with in her rights to do so. He denied developing nuclear bomb. .
During his presidential term, he was accused of favouritism while choosing and appointing government officials, as many of the senior officials in his government were chosen from his family.
In 2006, his team lost in the Iranian council elections. That year, in order to encourage younger talent he retired many Iranian scientists and professors. It led to the first major student protest against him since his election.
He was criticised for his alleged disregard for human rights and his economic mismanagement. In 2007, he came out with a special ‘gas rotating plan’ to cut down fuel consumption.
In 2009, he was re-elected as the President of Iran for the second term. He defeated Mir-Hossein Mousavi but Mousavi and his supporters accused Ahmadinejad of electoral fraud. The people also suspected an election fraud.
In February 2009, the Supreme Audit Court of Iran reported a total of $1.058 billion oil surplus revenue as unaccounted for and not returned to the government. Later parliamentary speaker, Ali Larijani asked for further investigations on the matter.
Continue Reading Below
In July 2009, his government faced crisis after he fired four of his ministers. This was because according to the constitution, if more than half of the cabinet members were replaced, the decision would remain invalid until re-approval.
In 2010, his remark on the 9/11 attacks at the 65th session of the United Nations General Assembly created controversy. The next year, during the 66th session he made comments of similar nature.
In 2011, many members of the Iranian parliament threatened to impeach his office, after he merged eight government ministries and removed three ministers without prior notice to the parliament.
He was defeated in the 2012 parliamentary elections. In March 2012, he became the first Iranian President to be questioned by the Islamic Consultative Assembly for issues relating to his presidency. He was summoned to answer questions about domestic and foreign policies.
In 2013, after the end of his Presidential term he left the Sa'dabad Palace, official residence of the President of Iran. Hassan Rouhani was elected as his successor. The same year, he was appointed as a member of the Expediency Council. 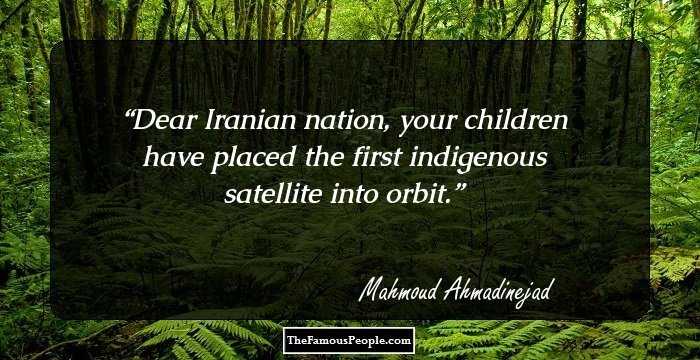 Quotes: Children
Personal Life & Legacy
In 1981, he married Azam Farahi. The couple has been blessed with three children.
Trivia
This former President of Iran has a puppet look-alike of him on a French show named, 'Les guignols de l'info'. 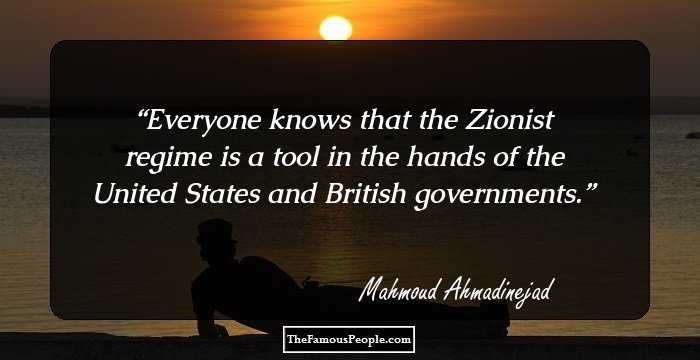 Quotes By Mahmoud Ahmadinejad | Quote Of The Day | Top 100 Quotes

See the events in life of Mahmoud Ahmadinejad in Chronological Order