The illustrious Italian poet, scholar and humanist, Francesco Petrarch was inarguably one of the most influential poets in the world literature and has been rightly deemed as the father of ‘Renaissance Humanism’. Best celebrated for his anthology of works addressed to Laura, his idealized ladylove, his work is considered as a classic of sorts in the literary world. He perfected the Italian sonnet pattern and founded the Petrarchan sonnet that became the standard verse pattern among his contemporaries and inspired poets like William Shakespeare and William Wordsworth. Deeply influenced by Saint Augustine, Petrarch spent later part of his life in religious contemplation. Petrarch’s attempts to conciliate humanism with Christian faith and his deep admiration for classical philosophy are well evident in his works. He wrote many love poems, which were largely exclamatory than persuasive. Petrarch’s blessed pen gave birth to many romantic poems, sonnets, letters, essays, histories and philosophical essays. He was a wide traveler and a highly introspective man. Ludovico Ariosto
20th July In History
DID WE MISS SOMEONE?
CLICK HERE AND TELL US
WE'LL MAKE SURE
THEY'RE HERE A.S.A.P
Quick Facts

Francesco Petrarch was born on 20 July 1304 in the Commune of Arezzo to Ser Petracco, a merchant and a lawyer, and his wife Eletta Canigiani. His father held many high public positions. Following Eletta’s death, Ser married Niccolosa Sigoli.

His father, a native of Florence, was exiled from the city following some legal problems. The family eventually moved to Avignon, where Ser found employment.

Francesco Petrarch’s father wanted him to have a legal career. Despite being more interested in literature, he decided to study law to appease his father. He spent a few years studying law at the University of Montpellier (1316-20) and the University of Bologna (1320-23).

He was, however, not only uninterested in law but also disliked the legal system and considered his education a “wastage.” His father died in 1326, and he no longer felt compelled to pursue a legal career. 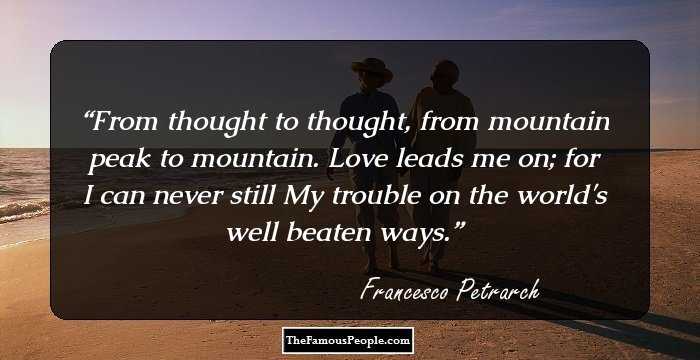 Francesco Petrarch went back to Avignon in 1326 and took up jobs in various clerical offices. He also received minor ecclesiastical orders and worked under the influential cardinal, Giovanni Colonna.

During this period, he was able to devote ample time to his literary pursuits. He became known as a prolific writer of letters and often wrote lengthy letters to his friend, fellow Italian writer Boccaccio.

In 1327, he met a woman known now only as “Laura” in the Church of St. Clare at Avignon. He fell in love with her, and she became his muse. He dedicated numerous poems to her name.

In the 1330s, Petrarch undertook diplomatic missions on behalf of the church and traveled around Europe. He also gained much fame as a writer, poet, and scholar. He composed several love sonnets, expressing his chaste love and admiration for Laura.

He was crowned the poet laureate of Rome in 1341 by Roman Senatori Giordano Orsini and Orso dell'Anguillara. In the ensuing years, he continued to travel across Europe, visiting France, Germany, and Spain. Besides his clerical duties and writing, he also studied the works of Cicero and explored Greek history and literature.

Francesco Petrarch personally discovered a previously-undiscovered collection of Cicero's letters in 1345. This collection, known as Epistulae ad Atticum, was addressed to Cicero’s close friend, Titus Pomponius Atticus. These letters are considered special among Cicero’s works. He continued to travel as a poet-diplomat till the end of his life. 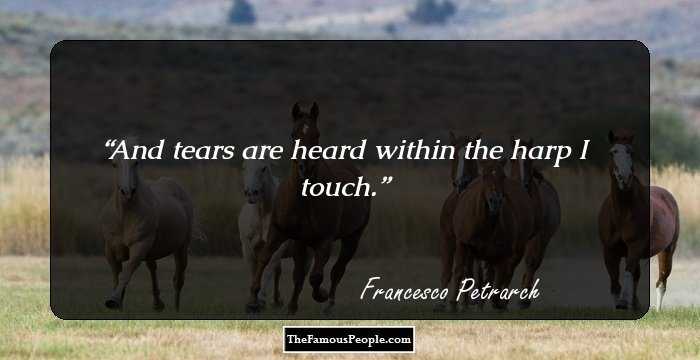 Francesco Petrarch was a wide traveller. He travelled for both work and pleasure. Accompanied by his brother and two servants, he climbed to the top of Mont Ventoux on 26 April 1336. He described the adventure in a letter addressed to his friend, the monk Dionigi di Borgo San Sepolcro.

He was apparently inspired by Philip V of Macedon's ascent of Mount Haemo and decided to undertake this feat. By accomplishing the ascent of Mont Ventoux, he became the first recorded Alpinist of modern times. Upon reaching the summit, he took his beloved mentor Augustine's Confessions from his pocket, a book he always carried with him.

Francesco Petrarch’s Rerum vulgarium fragmenta, a collection of 366 poems, is his best-known work. Most of the poems are in sonnet form but the sequence also contains numerous lines in the canzoni, sestine, madrigals, and ballate forms.

Another one of his major works is De secreto conflictu curarum mearum, a trilogy of dialogues in Latin in which he examines his faith with the help of Saint Augustine. Scholars view this book as an attempt by the author to reconcile his Renaissance humanism with his Christian faith. 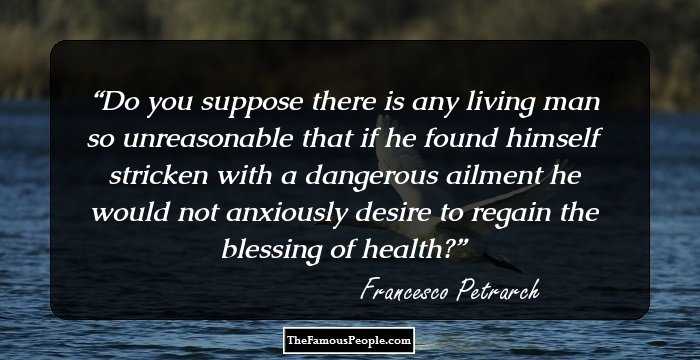 In 1327, Francesco Petrarch met a woman named “Laura” in the church of Sainte-Claire d'Avignon. He fell deeply in love with her even though a relationship between the two was not possible due to circumstances. According to some accounts, Laura was already married to someone else.

He never married but had two children out of wedlock: a son named Giovanni and a daughter named Francesca. He spent his later years with Francesca and her family. He also had a cat who he loved deeply.

He spent his last years in traveling and religious contemplation and died on 20 July 1374—his 70th birthday.

Quotes By Francesco Petrarch | Quote Of The Day | Top 100 Quotes

See the events in life of Francesco Petrarch in Chronological Order