Louis D. Brandeis was an American lawyer and Associate Justice on the US Supreme Court. His parents were Jewish emigrants from Bohemia. With the family settling in Louisville, he had most of his education there. He earned his Law degree from ‘Harvard Law School’. He set up the law firm ‘Warren and Brandeis’ in Boston, with Harvard classmate, Samuel Warren. He soon built a reputation for himself taking up cases only when he thought the client was on the right side of the law. He was dubbed as a ‘People’s Lawyer’ as he did not accept payment on cases of public interest so that he could address the bigger issue. In fact, he would do considerable research on the issues of public interest, as is evident from the cases concerning insurance and working hours for women. When President Woodrow Wilson nominated him, he became the first Jew to become Associate Justice on the US Supreme Court. A member of the Progressive Movement, he gave speeches that inspired social reforms. He wrote a number of books including ‘The Opportunity in the Law’, ‘Other People’s Money and How the Bankers Use It’, and ‘Business – A Profession’. His advocacy of the ‘Right to Privacy’ is still considered path breaking, and referred to, in many cases. Ted Cruz
Lawyers #150
Judges #26
Lawyers & Judges #153
DID WE MISS SOMEONE?
CLICK HERE AND TELL US
WE'LL MAKE SURE
THEY'RE HERE A.S.A.P
Quick Facts

American Celebrities
American Men
Male Lawyers
American Judges
American Lawyers
Childhood & Early Life
Louis Dembitz Brandeis was born on November 1, 1856 to Adolph Brandeis and Frederika Dembitz, both Jewish emigrants from Prague, Bohemia. They moved to the US to escape the anti-semitic mood that existed during the Revolutions of 1848.
His family settled in Louisville. They practiced a liberal form of Judaism. He was influenced by his Uncle Lewis Naphtali Dembitz’s Zionist activism, and even changed his middle name from David to Dembitz.
Louis graduated from ‘Louisville Male High School’. He was awarded a gold medal for “excellence in all his studies” by the ‘Louisville University of the Public Schools’.
His family returned to Europe in 1872. He studied for two years at the ‘Annen-Realschule’ in Dresden, Saxony. He returned to the US three years later, and entered ‘Harvard Law School’. 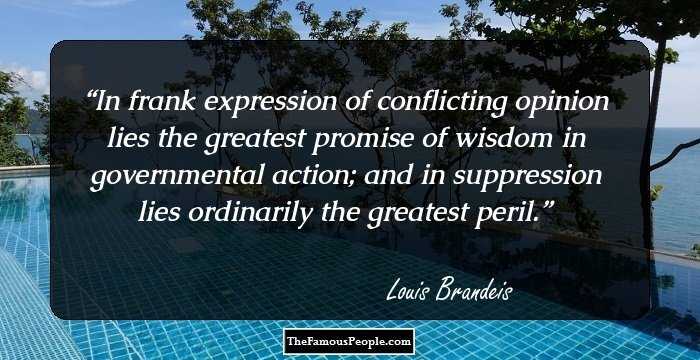 Who Is The Most Popular BTS Member?
Career & Later Life
Admitted to the Missouri bar in 1878, Brandeis joined a law firm in St. Louis. The following year, he set up the law firm ‘Warren and Brandeis’ in Boston, with Harvard classmate, Samuel Warren.
In 1890, he and partner Warren published the article “The Right to Privacy” in the ‘Harvard Law Review’. He argued that photographs and statements of individuals should not to be published without their consent.
In 1894, he represented Boston philanthropist Alice N. Lincoln in a case dealing with the pathetic condition of poor-houses. The hearings prompted the board of aldermen to introduce reforms.
In 1907, he set a precedent by introducing the ‘Brandeis Brief’ in the ‘Muller v. Oregon’ case, with only two pages on constitutional issues and 100 pages on the facts of the case.
In 1911, he gave speeches before the Economic Club of New York on ‘New Conception of Industrial Efficiency’, and before the Boston Central Labor Union on ‘Organized Labor and Efficiency’.
He used law as a tool to bring in many reforms, and is considered a leader of the Progressive Movement. He described his social philosophy in his 1911 book ‘The Opportunity in the Law’.
He supported Democratic candidate Woodrow Wilson in the presidential campaign of 1912. They shared common views on regulating large corporations and monopolies, ending protective tariffs and unfair business practices by large corporations.
During Woodrow Wilson’s tenure as President, Brandeis played an important role in democratizing and revamping the banking system. He persuaded the Congress to enact the Federal Reserve Act in 1913.
He wrote a number of articles on ways to curb the role of powerful banks for ‘Harper’s Weekly’, and published the book, ‘Other People’s Money and How the Bankers Use It’ in 1914.
Continue Reading Below
In 1914, his book ‘Business – A Profession’ was published. He had given a speech on ‘Business – A Profession’ two years earlier at the Brown University.
He was President of ‘The Provisional Executive Committee for Zionist Affairs’ from 1914 to 1918. He supported establishment of Palestine as the Jewish homeland, and the immigration of European Jews to Palestine to escape genocide.
In 1916, Wilson nominated Brandeis to the US Supreme Court. Many vehemently opposed it. A public hearing was held. His nomination was finally confirmed by a vote of 47 to 22 in the Senate.
In 1928’s Olmstead v. United States case, Brandeis was of the opinion that the state cannot intrude into the personal privacy of individuals. The case involved the use of wiretapping to gather evidence.
He distinguished between advertisements on billboards that were thrust on viewers and those in newspapers and magazines that people can choose to see, in the 1932 ‘Packer Corporation v. Utah’ case.
In the case of Louisville v. Radford of 1935, he declared the Frazier-Lemke Act, which prevented farmers from redeeming their mortgages for five years, as unconstitutional.
He sought to curb presidential discretion in the ‘Schechter Brothers v. The United States’. The Supreme Court declared the ‘National Industrial Recovery Act’ that allowed Presidential discretion to make laws facilitating economic recovery unconstitutional. 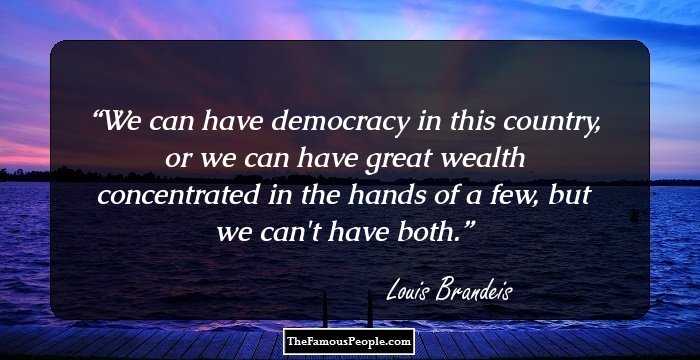 Major Works
In 1905, he became counsel to policyholders who feared loss of investment and protection if their insurance company filed for bankruptcy. He formed the Savings Bank Insurance League to protect policyholders.
In 1907, Boston and Maine Railroad stockholders approached him to stop New Haven Railroad’s expansion through acquisition. Brandeis’ proof of New Haven’s fraudulent means prompted enquiry by the Justice Department, finally halting its expansion.
In 1908, in the ‘Muller v. Oregon’ case, he represented the State of Oregon arguing that working long hours was detrimental to women’s health and psyche. Consequently, a ten-hour time limit was fixed.
He was against big corporations taking over small business. In a speech to the Economic Club of New York in 1912, he pointed out that with monopolies, efficiency and quality drop, while prices increase.
Personal Life & Legacy
Louis Brandeis became engaged to Alice Goldmark, daughter of Joseph Goldmark, a physician. They married a year later, in New York City, on March 23. 1891. They had two daughters, Susan and Elizabeth.
He retired from the US Supreme Court in 1939.
He died on October 5, 1941 following a heart attack. He was interred at the Law School of the ‘University of Louisville’, in Louisville, Kentucky.
He was honored by the US Postal Service in 2009, when a set of commemorative stamps were issued with his image, along with other associate justices of the Supreme Court.
Trivia
This famous American lawyer and justice stated “The world presents enough problems if you believe it to be a world of law and order; do not add to them by believing it to be a world of miracles.”
You May Like

See the events in life of Louis Brandeis in Chronological Order