James Simon Wallis Hunt was a British racing driver. He became popular in the 1970s and won the ‘Formula One World Championship’ in 1976. Thanks to his colorful personality, handsome looks, and playboy image, he earned the love and affection of many young people. Although he started his career as a touring car racing driver, he gradually advanced to ‘Formula Three’ in 1969 when he became part of the ‘Hesketh Racing’ team. He came to be known as ‘Hunt the Shunt’ due to his thrilling adventures on the racing track. In 1973, he entered ‘Formula One,’ representing the ‘Hesketh Racing’ team and driving a ‘March 731.’ Later, he won both World Championship and non-Championship races for his team, driving the ‘Hesketh 308’ car. Towards the end of 1975, he joined the ‘McLaren’ team and won the ‘World Drivers' Championship’ in 1976. After a couple of years, he joined the ‘Wolf’ team, but was unsuccessful in completing a series of races. He retired from his racing career during the mid-season of 1979. Following his retirement, he continued to create an impact as a television commentator and businessman. He died at the age of 45 after suffering a heart attack while sleeping at his home in Wimbledon, London. British Celebrities
British Men
Tall Celebrities
Tall Male Celebrities
British F1 Drivers
Childhood & Early Life
James Hunt was born on August 29, 1947, in Belmont, Surrey, England, UK, to a London stockbroker named Wallis Hunt and his wife Sue Hunt. He was the second child of the family and had an elder sister and four younger siblings.
He got educated at ‘Westerleigh School’ in Hastings from 1955. He then studied at ‘Wellington College’ in Crowthorne, Berkshire. As a young boy, he was resolute by nature and became a talented sportsman, excelling in tennis and squash.
Exposure to an auto race before his 18th birthday motivated him to become a professional car racer. However, given his whimsical temperament, his parents did not support his plans. He did odd jobs to purchase a used Mini and dedicated two years preparing it for races. His entry was, however, disqualified because the driver's seat was an old lawn chair. He later worked as a trainee manager for a telephone company to collect necessary funds to prepare for races.
During the initial days of his racing career, he met with several accidents that instilled fear in him. Gradually, he learned to overcome these fears in order to win races, but would later throw up in the garage. 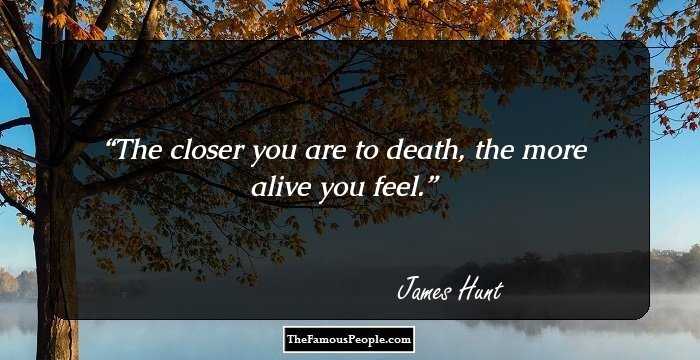 Quotes: You, Death
Continue Reading Below
You May Like

The Best Black Actresses Of All Time
Career
In 1968, he raced in ‘Formula Ford’ where he drove a ‘Russell-Alexis Mk 14’ car. In his first race, he finished at the fifth position. His first win came at ‘Lydden Hill Race Circuit.’ He also set the lap record on the ‘Brands Hatch’ short circuit.
In 1969, he raced in ‘Formula Three’ where he drove a ‘Meryln Mk11A’ car. Thereafter, he won several races and created a reputation for himself. In 1972, he was dropped from the ‘STP-March Formula Three’ team.
He signed up with the ‘Hesketh’ team in 1973. Initially, the team had him in ‘Formula Two’ but with little success. He was later asked to race in ‘Formula One’ according to Lord Hesketh’s wishes. He drove the ‘Hesketh March 731’ and won the second position at the 1973 ‘United States Grand Prix.’
In 1974, he was successful at the ‘BRDC International Trophy non-Championship’ race at Silverstone. In 1975, he won the ‘Dutch Grand Prix’ at Zandvoort. Soon, ‘Hesketh’ was running short of funds, forcing Hunt to sign up with ‘McLaren’ for the following season.
1976 turned out to be the most remarkable season of his career. He drove the ‘McLaren M23’ and won six ‘F1 Grand Prix’ that year. Hunt remained the last British F1 champion until 1992 when Nigel Mansell won the 1992 championship for ‘Williams.’
The season of 1977 started on a rough note with ‘McLaren M26’ underperforming. However, by the end of the year, he and ‘McLaren M26’ emerged quicker than most rivals. He won at ‘Silverstone Circuit’ and in ‘The Glen.’ He also won the race in Fuji but was imposed a heavy fine for not attending the podium ceremony. He finished fifth in the ‘World Drivers' Championship’ that year.
In 1978, he wanted to win a second world championship; however, he managed to score only eight world championship points due to the slow responding ‘McLaren M26.
By 1979, he was determined to part with the ‘McLaren’ team. He received a deal from ‘Ferrari’ but opted to join the ‘Walter Wolf Racing’ team. He wanted to win more races and compete for world championship. However, he lost motivation to do so when he realized that the team’s car was not good enough. On June 8, 1979, he announced his retirement from F1 competition.
After his retirement, he took up television commentary for BBC's ‘Formula One’ coverage and continued for 13 years until his death.
Continue Reading Below 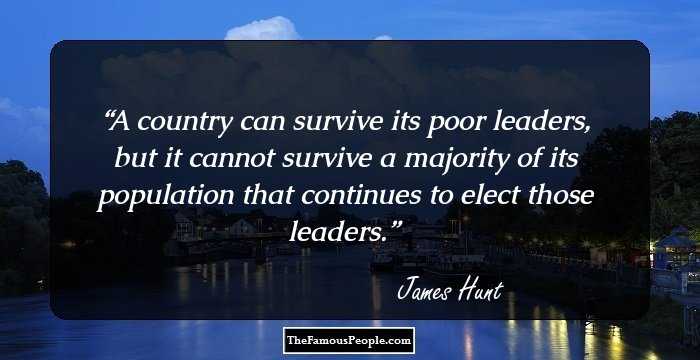 Major Works
James Hunt won a total of ten ‘Grand Prix’ during his lifetime out of which six were won in the year 1976 when he was part of team ‘McLaren.’
Awards & Achievements
In 1973, James Hunt was awarded the ‘Campbell Trophy’ for coming up with the best performance by a British in F1.
In 1976, he was awarded the ‘Tarmac Trophy’ and two checks worth £2500 among other awards by the Duke of Kent.
Personal Life & Legacy
James Hunt married Suzy Miller in October 1974. By the end of 1975, she moved on with Richard Burton, who also paid Hunt's divorce settlement of $1 million.
He married Sarah Lomax in December 1983. Together, they had two children, Tom and Freddie. They divorced in November 1989.
He died of heart attack on June 15, 1993. He was 45 years old and had proposed to Helen Dyson via telephone a day before his death.
James Hunt was posthumously inducted into the ‘Motor Sport Hall of Fame’ on 29 January 2014.
Trivia
Fellow racer Ronnie Peterson's fatal car crash in the 1978 ‘Italian Grand Prix’ had affected Hunt deeply.
Despite having earned millions in his lifetime, he was in terrible financial state at the time of his death.
In 2013, Ron Howard directed a movie called ‘Rush’ which was based on James Hunt’s life.
You May Like

See the events in life of James Hunt in Chronological Order