The name of motor sport legend, Mario Andretti is synonymous with the sport of racing and he is widely considered as one of the greatest race drivers of all time. The only professional racer in the world to have been victorious in Formula One, World Sportscar Championship and NASCAR, Andretti has a total of 109 career wins on major circuits. He has also been triumphant in midget and sprint car races and has also won the Indianapolis 500, Daytona 500, Formula One World Championship and the NASCAR Sprint Cup Series. In a career that spanned over three decades, Andretti was the only person to be conferred with the title of ‘United States Driver of the Year’ in three different decades. Besides Dan Gurney, Andretti is the only driver to win races in Formula One, IndyCar, World Sportscar Championship and NASCAR. He has been the recipient of numerous awards and racing laurels, including the Commendatore dell'Ordine al Merito della Repubblica Italiana, the highest civilian award in Italy, among others. Both his sons, Michael and Jeff are motor racers. Jimmie Johnson
DID WE MISS SOMEONE?
CLICK HERE AND TELL US
WE'LL MAKE SURE
THEY'RE HERE A.S.A.P
Quick Facts

American People
American Men
Male Sportspersons
American Sportspersons
American Race Car Drivers
Childhood & Early Life
Mario Andretti was born in in Motovun, Croatia, along with his twin brother Aldo to Italian parents, Luigi Andretti, a farm manager, and Rina.
As a thirteen year old boy, he had participated in the Formula Junior in Italy, which was his first-hand experience at the sport of racing. He was inspired by Alberto Ascari, a two-time Formula One world champion.
In 1955, his family moved to the United States of America and settled in the Lehigh Valley in Pennsylvania and they became American citizens. 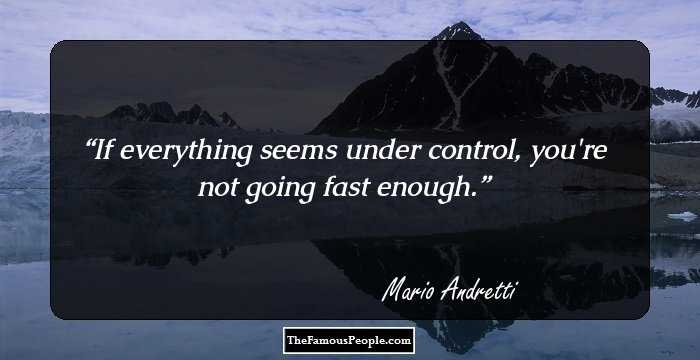 Quotes: You
Continue Reading Below
Career
In 1964, he was the winner of the Joe James-Pat O'Connor Memorial USAC sprint race that was held at the Salem Speedway in Indiana.
In 1965, he participated in the United States Automobile Club stock car race and finished twelfth in the race but after two years he won this race.
In 1968 and 1969, he was the winner of the ‘The National Association for Stock Car Auto Racing Championship’ and he also won ‘The 1967 Daytona 500’.
In 1969, he was victorious at the Indianapolis 500 and also won the championship trophy that season. By now, he had won 29 USAC championship races.
In 1971, he raced in a Ferrari at the South African Grand Prix. He won the race and that year he also won the non-championship Questor Grand Prix in the U.S for the Italian team.
In 1974, he was the winner of three United States Automobile Club stock car races and the following year he won four ‘road course races’.
In 1974 and 1975 season, he was victorious in a total of seven Formula 5000 events. After three wins, he was awarded the USAC National Dirt Track Championship title.
In the 1975-1976 International Race of Champions, he finished second and the next two consequent races, he finished second and won the championship after he finished first, third and second in a total of twenty races held.
In 1976, he drove for the Chapmans Lotus team and was victorious at the Mount Fuji circuit and the following year he won the United States Grand Prix West.
Continue Reading Below
From 1979 to 1980, he was not very successful. During this period he was paired with Elio de Angelis and test driver Nigel Mansell and the team did not do well at the race track.
In 1981, in the Indianapolis 500 he finished second, as Bobby Unser was ahead of him by eight seconds. After Unser was penalised for crossing under the caution flag, Andretti was declared the winner.
In 1983, he became part of the Newman/Haas Racing team and led the team to its first victory at the Elkhart Lake that year.
In 1984, the 44 year old racer was victories in his fourth national championship, which he won by six events, ten track records and a total of eight pole positions.
In 1988, he was the winner of the IndyCar race that was held in Phoenix and the also won the next IndyCar race that was held in Cleveland, the same year.
In 1993, he continued to taste victory at hid 52nd IndyCar race at the Phoenix 200. After this win, he became the first driver to win IndyCar races in four different decades.
In 1994, he participated in his last race at the 1994 Indianapolis 500. He retired from racing after this season. 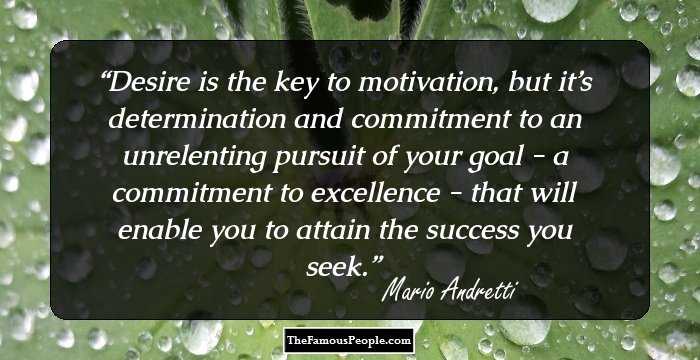 Quotes: You, Will
Awards & Achievements
In 1967, 1978 and 1984, he was conferred the title of ‘Driver of the Year in the United States.
Continue Reading Below
In 1990, he was inducted into the Motorsports Hall of Fame of America.
In 1992, he was bestowed the title of ‘the U.S. Driver of the Quarter Century’.
In 1996, he was inducted into the United States National Sprint Car Hall of Fame.
In 2000, he was conferred the title of ‘Driver of the Century’, a title that was bestowed upon him by the Associated Press and RACER magazine.
In 2001, he was inducted into the International Motorsports Hall of Fame.
On October 23, 2006, he received the Commendatore dell'Ordine al Merito della Repubblica Italiana, the highest civilian award in Italy.
Personal Life & Legacy
On November 25, 1961, he married Dee Ann, a native of Nazareth. The couple live together in Bushkill Township, Pennsylvania. Their sons, Michael and Jeff are also racers.
He is an ardent wine lover, wine maker and is also the Vice Chairman of Andretti Winery, located in Napa Valley, California. He also owns a petroleum business. 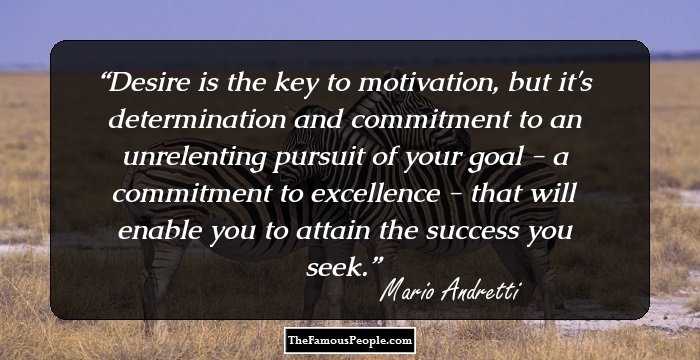 Quotes: You, Will
Trivia
At the age of 19, this popular American car racer once falsified his driver’s license and claimed that he was a 21 year old, so that he could participate in an amateur racing competition.

Quotes By Mario Andretti | Quote Of The Day | Top 100 Quotes

See the events in life of Mario Andretti in Chronological Order