Leon Trotsky was one of the key revolutionaries in the history of Russia. He foughtfor the liberation of the working class from the dominating regime of monarchy alongside the likes of Lenin. Appointed the Commissar of War, he helped defeat the forces that opposed‘Bolshevik’ principles. He was responsible for building the ‘Red Army’ and led the army to victory in the battle against the ‘White Army.’ His actions resulted in him being arrested and exiled to Siberia several times; his final exile was a complete banishment from the Soviet Union. All his life, he struggled to promote the theories of Marxist society and opposed mere capitalism as a means of progress. He supported Vladimir Lenin and his theories, though he disagreed on several principles. After Lenin’s death, the power was transferred to Joseph Stalin. Thereafter, Trotsky’s hold on the party declined steadily, resulting in a permanent exile from the country. The author of several books, Trotsky continued to promote Marxist and Socialist ways of governance. He was a strong critic of the Stalin-led government. He was brutally assassinated in Mexico City, where he was spending his time in exile. Leon Trotsky was born Lev DavidovichBronstein on November 7, 1879, in Yanovka, YelisavetgradskyUyezd, Kherson Governorate, Russian Empire, to David LeontyevichBronstein and Anna Bronstein. He was born in a wealthy family with his father working as a farmer.Despite being Jewish, they were not very religious.

His father sent him to Odessa to study in a German school. Odessa was a bustling cosmopolitan city, and his exposure to the city helped Trotsky develop an international outlook very early in his childhood.

Revolutionary activities were on the rise in Russia around that time. In 1896, Trotsky became involved in revolutionary politics after moving to Nikolayev.

He enrolled to pursue a pure Mathematics degree in college.However, he soon dropped out and got involved in setting up the ‘South Russian Worker’s Union’ in 1897. 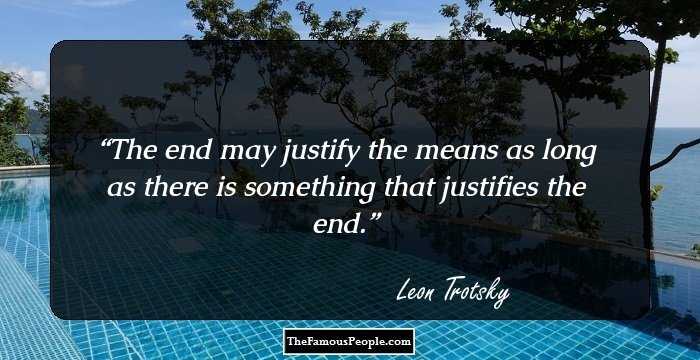 Leon Trotsky wrote pamphlets and leaflets, professing socialistic ideas and distributed them. In 1898, he was imprisoned along with several other members of the Union, for two years.

In 1900, he was sentenced to a four-year exile and had to leave to Siberia along with his wife. His two daughters, Zinaida and Nina, were born in Siberia;they escaped from Siberia with their mother.

He associated himself with a London based newspaper ‘Iskra’ and began writing for the newspaper. In 1902, he escaped from Siberia and moved to London, where he changed his name to Trotsky, and worked with socialist stalwarts like Lenin.

Members of the two factions kept changing sides, and Trotsky decided to leave the ‘Mensheviks’ due to differences in their policies and their reluctance to reconcile with Lenin.

General unrest with the ruling government picked up pace. In January 1905, a strike by the workers was called for, which grew into a massive protest at St. Petersburg. On the Sunday that followed, thousands of citizens, who participated in a peaceful protest march,were killed as the officials opened fire.The event would be marked in history as ‘Bloody Sunday.’

Following the events of ‘Bloody Sunday,’Trotsky returned to Russia to work closely with the ‘Bolsheviks’ and the ‘Mensheviks.’ However, he had to flee to Finland, after being betrayed by some members, and to avoid getting caught by the police.

The period of unrest continued all over Russia, and strikes at work places became common, affecting the rail system and creating chaos. This gave Trotsky an opportunity to return to Russia undetected and to get involved with the newspapers once again.

Trotsky not only wrote, but also voiced his opinion against the Tsarist government that soon led him to face trial once again. In 1906, at a trial, he gave a speech that catapulted him to fame and established him as an accomplished public speaker, though he had to suffer another exile to Siberia.

Continue Reading Below
In 1907, Trotsky escaped again and made his way to London, and later to Vienna. There, he met Adolph Joffe, who remained his friend for the next 20 years, and also taught him about psychoanalysis.

He spent much of the next few years in exile in various European countries.He continued writing revolutionary material for magazines. He also started a newspaper called ‘Pravda’ which ran until 1912.

In 1917, the Tsar, Nicholas II’s government, was overthrown.Trotsky used this opportunity toreturn to Russia. A new party called ‘Soviet Council of People’s Commissars,’ chaired by Vladimir Lenin was formed, and Leon Trotsky was made the Commissar of Foreign Affairs to make peace with Germany.

In the following year, Lenin ordered the formation of the ‘Red Army’ and made Trotsky its head. The first task of the ‘Red Army’ was to neutralize the ‘White Army,’which wasactive in the civil war, and Trotsky emerged victorious.

After the civil war, efforts were made to restore peace and order, and Trotsky was keen on allowing the State to control the trade unions. Lenin opposed the idea and a rift developed between the two. However, Trotsky ultimately reconciled with Lenin.

By 1922, Lenin’s health had deteriorated and he suffered strokes that made him weak. Though it seemed that Trotsky would take his place, it was Joseph Stalin who gathered forces to stall the ascension of Trotsky as the next leader.

After Lenin’s death in 1924, Trotsky was completely overshadowed by Stalin. Trotsky was pushed out of the government.He was eventually evicted from the country as well.

Between 1925 and 1928, Trotsky was consistently pushed out from party affairs by Stalin and his allies. His role in the ‘Russian Revolution’ was discredited by them, and he was expelled from the party and sent on exile.

In 1929, Trotsky was banished from the Soviet Union. His next few years were spent in France, Turkey, and Norway.He finally settled in Mexico City from where he continued to criticize Stalin. 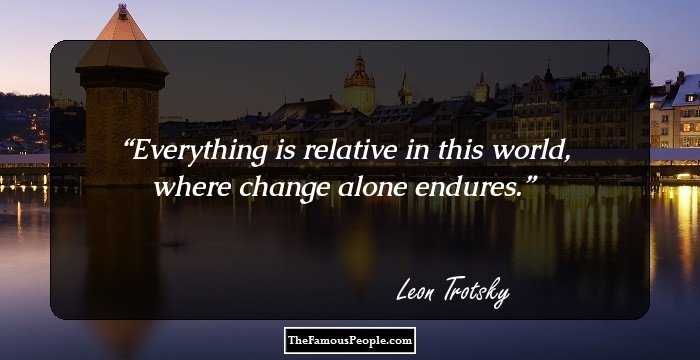 Leon Trotsky’s book ‘History of Russian Revolution’ is a classic account of the political, social, and economical situations that led and governed the ‘Russian Revolution.’ In the book, he has described how the unrest among the oppressed classes led to the overthrowing of the monarchist rule, and heralded a new era of socialist government under Lenin’s leadership.

Published in 1930, Trotsky’s ‘My Life: An Attempt at an Autobiography’ is the only autobiography written by a ‘Bolshevik.’ He wrote this book while spending his long exile from the Soviet Union; it highlights not only his lifelong struggle, but also the horrors of the Stalinist regime.

The ‘October Revolution,’ which was led by Trotsky, was an example of the concept of ‘Permanent Revolution’ against the monarchic regime. This was a great achievement in the struggle against the bourgeoisie, because the problems faced by the working class were not solved until then.

He also developed the concept of ‘United Front,’ a method of uniting all revolutionaries and reformists against a common struggle. His theories also voiced protests against the rising Fascist governance in Germany and Spain, and advocated a united front for thesecountries as well. 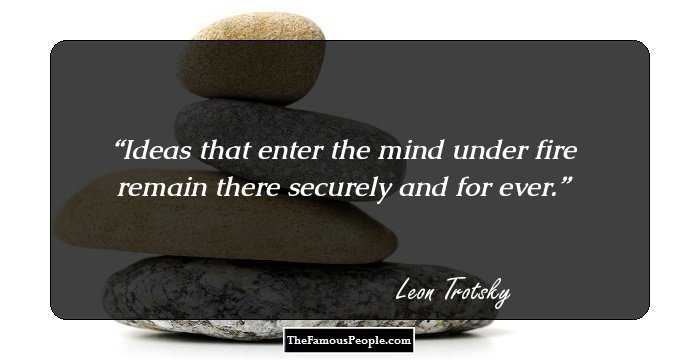 In 1900, Trotsky married Aleksandra Sokolovskaya with whom he had two daughters, Zinaida and Nina. The marriage was short-lived as the couple soon got divorced. His daughters were taken care of by his parents.

In 1902, he met Natalia Ivanovna Sedova and got married to her in 1903.The two remained marrieduntil his death. They had two children, Lev Sedov and Sergei Sedov.Lev and Sergei predeceased their parents.

On August 20, 1940, while he was sitting at his desk, he was attacked by Ramon Mercader, an undercover agent working for the Soviet secret police. He was hit with an ice axe which punctured his skull,injuring him severely. Trotsky was taken to the hospital where a surgery was performed. He managed to survive more than a day, but died on August 21, 1940, at the age of 60.

Born as Lev Bronstein, this Russian revolutionary adopted a new name which became his revolutionary pseudonym, and he used it for the rest of his life.

This fierce socialist Russian revolutionary was highly influenced by the theories of Karl Marx, a German philosopher. He was arrested and charged for spreading dangerous ideas and causing political disorder, and sent on exile to Siberia.

Childhood & Early Life
Born on November 7, 1879, as Lev Davidovich Bronshtein, Leon Trotsky was the fifth of the eight children born to David Leontyevich Bronshtein, and Anna Bronshtein. His was a well-to-do family with his father being a farmer and, despite being Jewish, they were not very religious.
His father sent him to Odessa, in a German school, for him to commence his education. Odessa was a bustling cosmopolitan city, and it was from here that Trotsky developed an international outlook, very early in his childhood.
Revolutionary activities had increased pace in Russia around that time. In 1896, Trotsky too became involved in revolutionary politics after moving to Nikolayev.
He had enrolled for pursuing a pure Mathematics degree in college, but he soon quit. Instead, he got involved and helped in setting up the South Russian Worker’s Union in 1897.

Quotes By Leon Trotsky | Quote Of The Day | Top 100 Quotes

See the events in life of Leon Trotsky in Chronological Order