DID WE MISS SOMEONE?
CLICK HERE AND TELL US
WE'LL MAKE SURE
THEY'RE HERE A.S.A.P
Popularity Index
61
Poets #86
Entomologists #1
Novelists #61
Quick Facts

Who was Vladimir Nabokov?

Vladimir Nabokov was a renowned Russian-American novelist. Stylistic prose, drawing from personal experience, a healthy disdain for comparison, the rejection of individualism, or a successful combination of all of them endeared Vladimir Nabokov to his readers. Sometimes, controversial works of art lose their magic with time. However, this author’s most notoriously famous work has not stopped to fascinate movie makers, playwrights, translators, publishers, critics, reviewers and even the humble reader. Although his earliest works were in Russian, once his works were translated, he became a distinguished author in English as well. A methodical man by nature, his writings are interwoven with complex plots, literary devices and clever word play. There were several instances in his life when he was not satisfied with his output or when he was unable to successfully complete what he set out to write. Paradoxically, he held literary convention in contempt; this is the only point which his critics, continue to focus on. He also received much flak for focusing on language and detail and not on character development as his plot progressed in novels. He was not only a remarkably shrewd author but he was also a distinguished lepidopterist and the creator of a number of chess problems.

The 50 Most Controversial Writers of All Time Novelists
Entomologists
American Men
Russian Men
Childhood & Early Life
Vladimir Vladimirovich Nabokov was born to Vladimir Dmitrievich Nabokov and Elena Ivanovna. His family was of minor nobility and the author enjoyed a near-perfect, privileged childhood. He was the eldest of five children and was trilingual from an early age. He spoke Russian, English and French.
After the family lost its estate to the October Revolution in 1917, the family fled to Crimea, Livadiya, Western Europe and settled briefly in England.
Over there, the author enrolled in Trinity College, Cambridge to study Zoology but changed courses to Slavic and Romance languages. 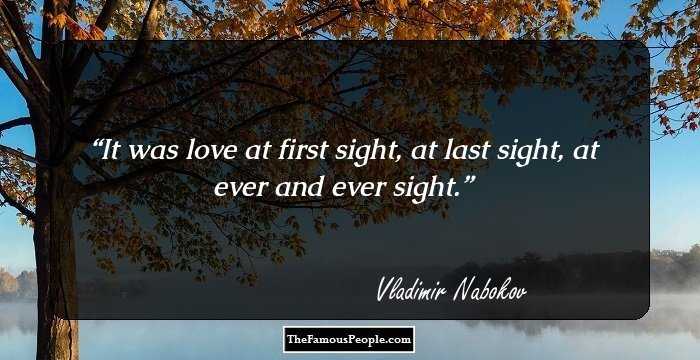 University Of Cambridge
Male Poets
Taurus Poets
Male Writers
Career
In 1920, the family moved to Berlin, but after his father’s assassination in 1922, Nabokov’s mother and sister moved to Prague. He however, stayed in Berlin earning a living out of writing, teaching languages and by giving tennis and boxing lessons.
The author’s earliest works include volumes of poetry, such as ‘Stikhi’ (which was published much later), ‘Al'manakh: DvaPuti’, ‘Grozd Gornii Put’, ‘Vozvrashchenie Chorba’, etc., were published under the pseudonym, ‘Vladimir Sirin’. ‘Mashen'ka’ and ‘Korol' Dama Valet’ are two of the important novels he wrote during this time.
In the 1930s, he wrote ‘Zashchita Luzhina’, ‘Kamera Obskura’, ‘Otchayanie’, ‘Priglasheniyenakazn’; ‘Vozvrashchenie Chorba’ and ‘Sogliadatai’ (collections of short stories and poems), and the play ‘Izobretenie Val'sa’.
In 1937, he moved to France from Germany and settled in France. But in 1940 as France was about to fall to Germany during the World War II, the Nabokov family fled to the United States and settled in Manhattan.
He began volunteer work as an entomologist at the ‘American Museum of Natural History’ where he met Edmund Wilson who introduced Nabokov's work to American editors.
In 1941, he joined Wellesley College to serve as resident lecturer in comparative literature. During his tenure he founded the college’s one-man Russian Department and served as the de facto curator of lepidoptery at Harvard University's Museum of Comparative Zoology.
In the 1940s, his literary output was in English. It includes novels such as, ‘The Real Life of Sebastian Knight’, ‘Bend Sinister’, etc.
His Novel ‘Lolita’ was published in 1955 in Paris and in 1958 in New York t. It achieved never-before-seen critical and commercial acclaim. The book was into its third printing within days and went on to sell 100,000 copies in the first three weeks.
‘Pnin’, ‘Pale Fire’ and ‘Ada or Ardor: A Family Chronicle’ are some of the noteworthy novels written in the following decades. This prolific writer also published more than 8 volumes of poetry, several shorts stories, translations, and autobiographies.
Continue Reading Below
In 1964, he cemented his stature as a literary critic through the four-volume translation and commentary of Alexander Pushkin's epic, ‘Eugene Onegin’.
An avid lepidopterist for a major part of his life, he organized butterfly collections, wrote extensively on it, helped distinguish species, and hypothesised that a butterfly species flew over the Bering Strait in waves to reach Chile.
In 1969, he authored ‘Poems and Problems’, which included a collection of his poems and 18 chess problems.
From 1970 to 1976, he authored, ‘Transparent Things’, ‘Look at the Harlequins!’, ‘Tyrants Destroyed and Other Stories’, ‘Lolita: A Screenplay’ and ‘Details of a Sunset and Other Stories’, before his death. 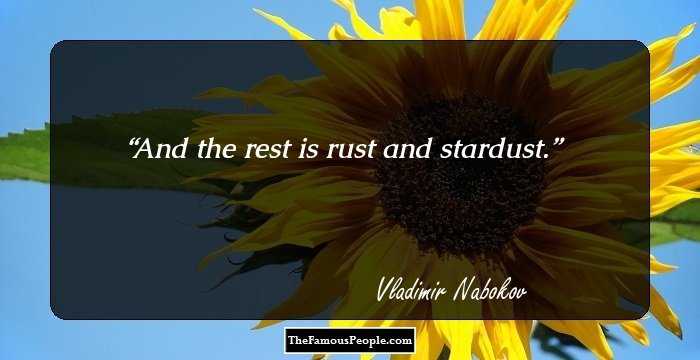 Russian Poets
Taurus Writers
American Poets
Male Novelists
Major Works
The controversial ‘Lolita’, written in 1955, spawned two film adaptations, one musical, four stage-plays, one completed opera and two ballets. It was also listed on Time’s list of ‘100 best English-language novels from 1923 to 2005’ and ‘100 Best Novels of the 20th Century and 100 Best Books of All Time’. This is largely regarded as his literary masterpiece.
Recommended Lists:

Male Scientists
Russian Writers
Taurus Scientists
American Writers
Awards & Achievements
Although he was a finalist for the National Book Award for Fiction seven times, he never won it.
In 1963, he was nominated for an Academy Award in the ‘Best Writing, Screenplay Based on Material from Another Medium category’. 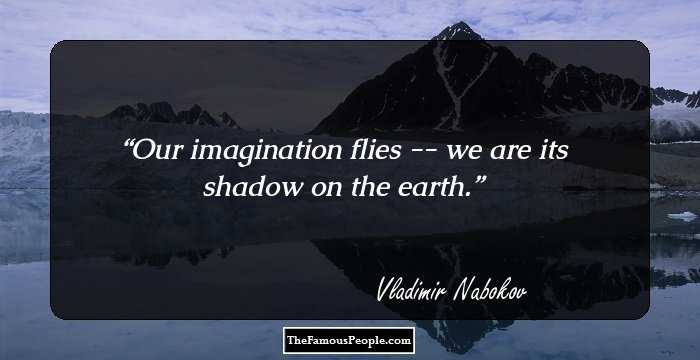 Russian Novelists
American Novelists
Russian Scientists
American Scientists
Personal Life & Legacy
His engagement to Svetlana Siewert broke in early 1923, as her parents worried that he could not provide for her.
He married Vera Evseyevna Sloniminl in 1925; their son, Dmitri, was born eleven years later.
He died in Montreux, in 1977 due to severe bronchial congestion. His remains were cremated and buried at the Clarens Cemetery.
In 2009, ‘The Original of Laura’, his unfinished novel, was published by his son Dmitri.
The PEN/Nabokov Award is awarded biannually by the PEN American Centre to writers, especially novelists. The winner receives a prize of $20,000.
Recommended Lists:

American Entomologists
Taurus Men
Trivia
When this famous Russian author attempted to burn the initial copy of his would-be best-seller ‘Lolita’, it was his wife Vera, who stopped him.
Recommended Lists:
Scientists #157
Writers #114
You May Like

Quotes By Vladimir Nabokov | Quote Of The Day | Top 100 Quotes

See the events in life of Vladimir Nabokov in Chronological Order