Lazar Moiseyevich Kaganovich was a Soviet communist who was one of the most trusted deputies of Joseph Stalin. He played a pivotal role in Stalin’s rise to the top position of the politburo and the premiership of the Soviet Union. He was also the orchestrator of the 1932-33 famine in Soviet Ukraine and garnered notoriety for his brutal treatment and killings of those regarded as threats to Stalin’s regime. He served as the project manager and helmed the original design team of the Moscow Metro, which was called Metropolitenimeni L.M. Kaganovicha until 1955. Originally from the Kiev Governorate, Kaganovich hailed from a Jewish family. He obtained membership of the Bolshevik Party around 1911 and quickly became an important figure in the communist movement. During the October Revolution of 1917, he was the leader of the insurgency in Gomel. In the years leading up to the Second World War, he held various significant posts in the Soviet government. During the war, Kaganovich served as the Commissar (Member of the Military Council) of the North Caucasian and Transcaucasian Fronts. By the time of his death in 1991, he had effectively become the last surviving Old Bolshevik. Only five months after his death, the Soviet Union itself collapsed. Russian Celebrities
Male Leaders
Russian Leaders
Sagittarius Leaders
Russian Political Leaders
Childhood & Early Life
Born on November 22, 1893, in Kabany, Kiev Governorate, Russian Empire (present-day Dibrova, Poliske Raion, Kiev Oblast, Ukraine), Lazar Kaganovich was the son of Moisey Kaganovich and Genya Dubinskaya. He had at least two siblings, a brother Mikhail and a sister Roza.
He became part of the Bolshevik Party around 1911. In 1915, he was made a Communist organizer at the shoe factory where he was employed. It was at this point that he was apprehended by the authorities and taken to Kabany.
Continue Reading Below
You May Like

The Best Black Actresses Of All Time
Involvement in the Revolution & Civil War
Between March and April 1917, Lazar Kaganovich acted as the chairman of the Tanners Union and as the vice-chairman of the Yuzovka Soviet. In May, he was appointed the leader of the military organization of Bolsheviks in Saratov.
In August 1917, he was made the leader of the Polessky Committee of the Bolshevik Party in Belarus. After the October Revolution of 1917 broke out, he helmed the insurgency in Gomel.
In 1918, he served as Commissar of the propaganda department of the Red Army. Between May 1918 and August 1919, he served as the chairman of the Ispolkom (Committee) of the Nizhny Novgorod gubernia.
From 1919 to 1920, he worked as the governor of the Voronezh gubernia. Kaganovich was based in Turkmenistan between 1920 and 1922, serving as one of the heads of the Bolsheviks against local Muslim rebels (basmachi). He was also helming regular disciplinary expeditions against local oppositions.
A Member of the Communist Party
After Stalin assumed the position of the general secretary of the Communist Party, he immediately brought Lazar Kaganovich into his political apparatus to serve as the leader of the Organizational Bureau or Orgburo of the Secretariat. This organisation was tasked with the supervision of all assignments within the apparatus of the Communist Party.
During his tenure here, Kaganovich was instrumental in the placements of Stalin’s allies in significant positions within the Communist Party bureaucracy. During this period, he proved his abilities and personal loyalty to Stalin.
In 1924, he joined the Central Committee. Between 1925 and 1928, he served as the first secretary of the Communist Party of the Ukrainian SSR. His responsibility was "ukrainizatsiya", which at the time stood for recruiting Ukrainian communist popular cadres.
He also had the orders to introduce collectivization and the policy of economic suppression of the kulaks. This caused much unrest in the region, and Stalin was compelled to bring him back to Moscow.
In Moscow, he was reinstated as the secretary of the Central Committee of the Communist Party and performed that job until 1939. In 1930, he joined the Soviet Politburo. In the 1930s, he also held several other important posts in the party.
Continue Reading Below
MetropolitenImeni L.M. Kaganovicha
At the June 1931 Plenum of the Central Committee of the All-Union Communist Party of Bolsheviks, the party declared its intention of creating the Moscow Metro to ease the burden of the tram lines.
In the 1930s, Kaganovich co-supervised the first Soviet underground rapid-transport system, the Moscow Metro. It was named Metropolitenimeni L. M. Kaganovicha but was renamed after Stalin’s death in 1955.
Involvement in the 1932-33 Famine
Lazar Kaganovich, along with Vyacheslav Molotov, took part in the All-Ukrainian Party Conference of 1930 and was allocated the duties of the introduction of the collectivization policy that led to the massively disastrous 1932-33 famine. This catastrophe has come to be known as the Holodomor in Ukraine.
Similar policies caused terrible strife in places like the Soviet Central Asian republic of Kazakhstan, the Kuban region, Crimea, and the lower Volga region.
Serving as an emissary of the Central Committee of the Communist Party, Kaganovich visited Ukraine, the central regions of the USSR, the Northern Caucasus, and Siberia to oversee the progress of collectivization and oppression of the Kulaks.
On January 13, 2010, Kaganovich, along with Pavel Postyshev, Stanislav Kosior, Vlas Chubar, and other Soviet Communist Party functionaries, was convicted of genocide against the Ukrainians during the disastrous Holodomor famine.
Earning the Nickname Iron Lazar
Between 1935 and 1937, Lazar Kaganovich served as the Narkom (Minister) for the railways. Even before the Great Purges began to be implemented, he oversaw the apprehensions of thousands of railway administrators and managers as alleged "saboteurs".
Between 1937 and 1939, he held the post of Narkom for Heavy Industry. From 1939 to 1940, he was the Narkom for the Oil Industry. During each of these tenures, he ordered the arrests of numerous government officials to remove the undisciplined ones from the ranks and ensure unquestioning assent to Stalin’s policies.
For his absolute loyalty towards Stalin and total mercilessness while implementing his orders, Kaganovich earned the nickname, “Iron Lazar”. Even his older brother, Mikhail, was not spared. He committed suicide after he heard from Kaganovich that Stalin was suspecting him of communicating with the ring wing.
Continue Reading Below
After the Second World War started, Lazar Kaganovich was appointed Commissar (Member of the Military Council) of the North Caucasian and Transcaucasian Fronts. In 1947, he was made the first secretary of the Ukrainian Communist Party.
Between 1948 and 1952, he was the chairman of Gossnab (State Committee for Material-Technical Supply).
Kaganovich held voting memberships of the Politburo and the Presidium until 1957. Furthermore, he served as one of the first mentors of the eventual first secretary of the Communist Party, Nikita Khrushchev.
Later Years
A doctrinaire Stalinist, Lazar Kaganovich was able to keep his Presidium membership after Stalin’s passing in March 1953 but lost much of his sway within the politburo and the government.
After taking part in an unsuccessful coup against Khrushchev in 1957, he was compelled to submit his resignation from the Presidium and the Central Committee. In 1961, he was fully ousted from the party.
After that, Kaganovich completely retired from politics and focused on his family life and his grandchildren. During the final years of his life, he would get together with fellow pensioners to play dominoes. He often vocalised his frustration against Soviet media’s criticism of Stalin.
Family & Personal Life
Lazar Kaganovich was married to Maria Privorotskaya. They had two children, a daughter, Maya (born 1923-2001) and a son, Yuriy (1931-1976).
Following a heart attack, Kaganovich passed away on July 25, 1991, in Moscow, Russian SFSR, Soviet Union. He was 97 years old at the time. He is interred at the Novodevichy Cemetery in Moscow.
Trivia
In 1987, American journalist Stuart Kahan put out the massively controversial biographical work on Kaganovich, ‘The Wolf of the Kremlin’.
You May Like

See the events in life of Lazar Kaganovich in Chronological Order 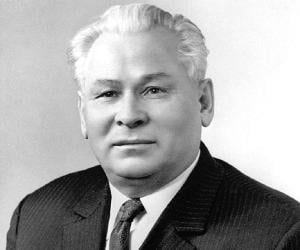