Advanced Search
Richard John Thompson is an English musician, songwriter and guitarist. He is particularly famous for his collaboration with English folk rock and electric rock band ‘Fairport Convention’ in his younger days, and also for his partnership with his ex-wife and famous singer Linda Thompson. His compositions have been sung by many famous singers over the years, like: June Tabor, Joel Fafard, Maria McKee, Shawn Colvin, Norma Waterson, Martin Carthy, Nanci Griffith, etc. He was appointed Officer of the Order of the British Empire in the 2011 New Year Honors for services to music, recognition for his long career in music. He has also been honored with awards like: Orville H. Gibson award for best acoustic guitar player, Ivor Novello Award for songwriting, lifetime achievement award from BBC Radio, etc. For almost all his life, Thompson existed in virtual anonymity, having been a recluse for he is a true follower of the Sufism, while side by side acquiring enormous critical admiration for his splendid guitar tunes and the dark wittiness and affluence of his marvelous songwriting. He still continues to write songs and perform on tours throughout the world. Seal
3rd April In History
DID WE MISS SOMEONE?
CLICK HERE AND TELL US
WE'LL MAKE SURE
THEY'RE HERE A.S.A.P
Quick Facts

British People
Lyricists & Songwriters
British Men
Male Singers
Aries Singers
Childhood & Early Life
Thompson was born in Notting Hill, London, England, to a Scotland Yard detective. He was born in the kind of family where all the members were inclined towards music in their own way; his father was a recreational guitarist.
He attended the William Ellis School in Highgate, London, where, still inclined towards music and guitar, he formed his first band ‘Emil and the Detectives’ with his fellow student Hugh Cornwell—future lead guitarist and singer of ‘The Stranglers’.
At 18 Thompson started playing with ‘Fairport Convention’—folk rock and electric folk band. His music impressed the American producer Joe Boyd and he decided to mentor him and signed the band to his Witchseason production and management company. 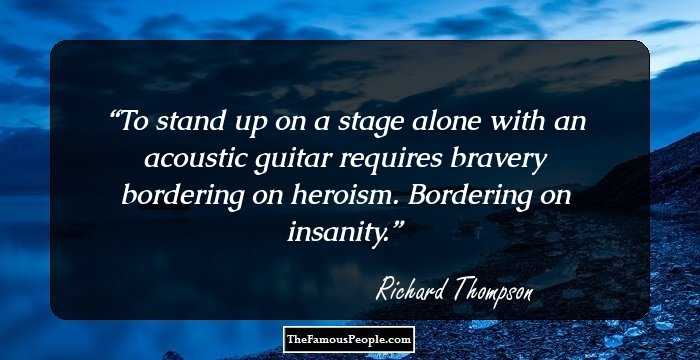 Quotes: Alone
Continue Reading Below
Career
In 1969, ‘Fairport Convention’s’ album ‘What We Did on Our Holidays’ was released and Thompson started to get recognition as a songwriter. His compositions: ‘Meet on the Ledge’, ‘Crazy Man Michael’ and ‘Sloth’ gained immense popularity.
Thompson decided to leave the band in 1971 after the band’s van crashed on the way home from a gig at Mothers, a club in Birmingham. The band lost their drummer Martin Lamble and Thompson lost his girlfriend.
He released his solo album ‘Henry the Human Fly’ in 1972; he collaborated with artists like: Andy Roberts, Sandy Denny, Linda Peters, etc. The album is now very famous but at the time it was ridiculed by the press.
In 1974, Thompson and Linda Peters, now a couple, founded an electric band, ‘Sour Grapes’, with ex-‘Fairport Convention’s’ Dave Pegg on bass and Dave Mattacks on drums, plus button accordionist John Kirkpatrick. The band toured in Britain the following year.
Newly converted to Sufism, Thompson withdrew to the English countryside to start a Sufi community and returned to the business with ‘First Light’ in 1978. The album was a critical success but failed to earn much money.
Boyd signed the Thompson to his label ‘Hannibal’ and an album called ‘Shoot Out the Lights’ was recorded. The release of the album was delayed until 1982 as Linda was pregnant at the time. The album was a commercial success.
He separated with his wife after the release of ‘Shoot Out the Lights’, while the couple decided to maintain professional relationship. But they fell out quite badly and Thompson released ‘Hand of Kindness’ in 1983, without Linda.
In 1985, ‘Across a Crowded Room’ was his last album recorded with Boyd. He signed a big deal with PolyGram in the same year and moved his working base to California to live with his new wife, Nancy Covey.
Throughout the 1990s, he continued to receive rave critical reviews for his work but could not make much money. He released albums like: ‘Rumor and Sigh (1991)’, ‘Mirror Blue (1994)’, ‘You? Me? Us? (1996)’, and ‘Mock Tudor (1999).
Continue Reading Below
In 2003, after he declined to renew his contract with Capitol, BBC produced a documentary about his musical career, ‘Solitary Life’, directed by Paul Bernays. It contained interviews with Thompson and contributions from Bonnie Raitt, ex-wife Linda, Nancy etc
He released ‘Sweet Warrior’ in 2007 and the album was licensed to different labels in different countries - Shout! Factory in the United States, P-Vine in Japan, Planet Records in Australia, and Proper Records in the UK and Europe.
In 2010, Thompson put together a band and did various live shows, with the aim to record a new album in a live setting. It resulted into ‘Dream Attic’—an album that was nominated for a Grammy Award in the same year.
Thompson released ‘Electric’ in 2013. Recorded in Nashville with Buddy Miller as the producer; the album received rave critical reviews and made it to the UK top 20. He also toured to promote the album in American and England. 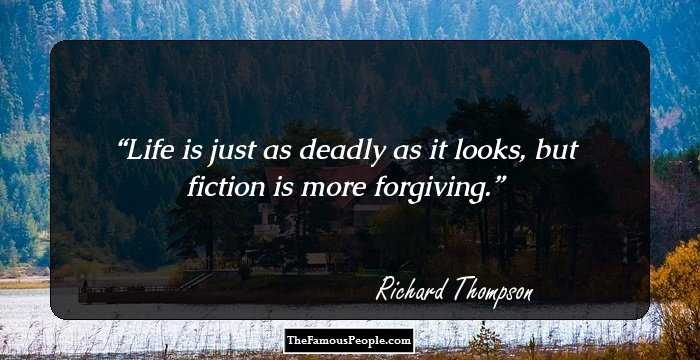 Quotes: Life
Major Works
Thomson’s first solo album ‘Henry the Human Fly’ in 1972 portrayed the real talent in him. Although the work was recognized not at the time of its release but many years later critics have now recognized its artistic value.
Awards & Achievements
Thompson has received many accolades like: Orville H. Gibson award for best acoustic guitar player, Ivor Novello Award for songwriting, lifetime achievement award from BBC Radio, appointment as the Officer of the Order of the British Empire, etc. 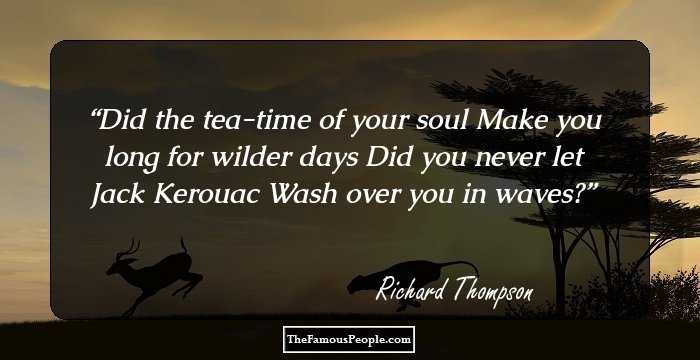 Quotes: You, Never
Personal Life & Legacy
Thompson and singer Linda Peters started a relationship when Peters collaborated on his solo album ‘Henry the Human Fly’ with her and the couple got married in 1972. They have a son together: Teddy Thompson, who is also a musician. They separated in December 1981.
He started an affair with grew closer to Nancy Covey while on his US tour for ‘Shoot Out the Lights’. The couple got married in 1985, after he divorced Peters, and they both moved to California, where Thompson made his working base.
Trivia
‘Henry the Human Fly’ gained the notorious distinction of being the worst-selling album in the history of Warner Bros. Records.
He was awarded the Mojo Les Paul Award for ‘Guitar Legend’ in 2010.
He was awarded an honorary doctorate by the University of Aberdeen in 2011.
Recommended Lists:
Singers #1147
Lyricists & Songwriters #1100

See the events in life of Richard Thompson in Chronological Order