Brian Eno is one of the talented and acclaimed musicians who is world renowned as the principal innovator of ambient music. It was he who launched the genre into the world of music. A composer, record producer, singer and visual artists, his foray into the music world started during his teenage years. His first tryst into music professionally was as a member of the band Roxy. It not only gave him a platform but launched him musically. Often he is reported quoting the fact that had it not been for Roxy, he would have been an art teacher somewhere. Eno’s musical ventures have been experimental in form, taking into consideration his varied styles of music from ambient themed melody to generative music. Other than promoting the new genres of music, he even endorsed innovative production techniques. Over the years, he has released a string of solo albums and collaborated with other musicians to produce varied but soulful music. Read through the following lines to know in details about his life and works. British People
Composers
Record Producers
Lyricists & Songwriters
British Men
Childhood & Early Life
Brian Eno was born in Woodbridge, England.
Raised as a Suffolk, he gained his formal education from St Joseph’s College in Ipswich. Later on, he attended Ipswich Art School and Winchester School of Art, graduating from the same in 1969.
Inspired by a lecture by Pete Townshead wherein he learned about the use of tape machines by non-musicians, he took to making music as his chosen profession. He use tape recorder as his first musical instrument.
Cardew's ‘The Great Learning’ was the first released recording for which he played. He was recorded as one of the voices in the recital of The Great Learning Paragraph. 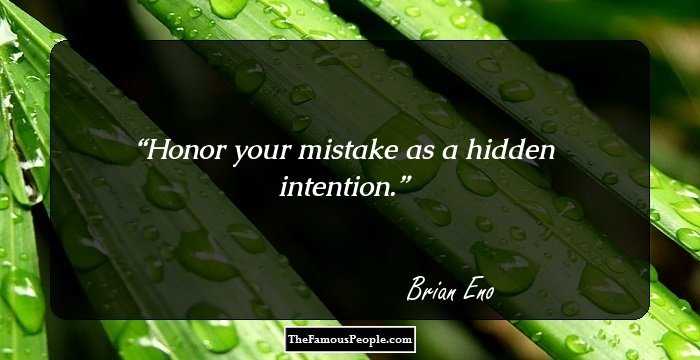 Continue Reading Below
Career
He launched his career professionally as a member of the glam rock band, Roxy Music in 1971. His profile included operating in the mixing desk, processing the sound of the band and singing back vocals.
As time passed he moved on stage with the other band members as a performing member of the group. However, his association with the band did not last long and he left the group in 1973, following argument with the lead band singer.
From 1973 to 1977, he launched himself as a solo artist and came up with four albums, ‘Here Come the Warm Jets’, ‘Taking Tiger Mountain’, ‘Another Green World’ and ‘Before and After Science’.
While ‘Another Green World’ and ‘Before and After Science’ contained instrumental pieces, the album, ‘Taking Tiger Mountain’ included his best-known song, ‘Third Uncle’
In 1972, he along with Robert Fripp employed the Frippertronics, or tape delay system to come up with the album, ‘No Pussyfooting’. Following the success of their debut venture, the duo came up with their second album titled ‘Evening Star’.
Other than releasing albums, he was a prominent member of the art classical orchestra. Together with tehm, he released their first album, ‘The Portsmouth Sinfonia Plays the Popular Classics’ in 1973. The following year, he came up with the first live album, ‘Hallellujah! The Portsmouth Sinfonia Live’
It was the successful reception of his album that led him to create the genre of ‘ambient music’, which is characterized by low-volume music that modifies the perception of the surrounding environment by an individual.
He then released his first ambient album, ‘Discreet Music’ in 1975. The album was followed by an ambient series, which comprised of four albums including Music for Airports (Ambient 1), The Plateaux of Mirror (Ambient 2), Day of Radiance (Ambient 3) and On Land (Ambient 4).
In 1975, he performed as Wolf in the rock version of the Sergei Prokofiev's classic ‘Peter and the Wolf’. The following year, he recorded a piece with the popular Krautrock/Kosmische Musik group ‘Harmonia’.
Continue Reading Below
In 1980, he tried a different avenue of music by providing the score for the Herbert Vesely’s film, ‘Egon Schiele – Excess and Punishment’. Interestingly, despite being an unusual choice for the film, it worked wonders blending effectively with the theme of sexual obsession and death.
Later on, he joined hands with David Byre of Talking Heads for the album, ‘My Life in the Bush of Ghosts’. The album was unique in its content as it featured an amalgamation of radio broadcasts and sampling recordings from around the world.
Year 1992 was a significant year for his career as it witnessed the release of his album, ‘Nerve Net’ that included heavily syncopated rhythms. He released yet another album, ‘The Shutov Assembly’ which included his works from 1985 to 1990.
In the 1990s decade, he shifted focus from ambient music to a more self-generating musical system which was called generative music. Generative music resulted from blending several musical tracks of diverse sounds, length and silence.
He used the genre of generative music to come up with various albums including, ‘I Dormienti (The Sleepers)’, ‘Lightness: Music for the Marble Palace’, ‘Music for Civic Recovery Centre’, ‘The Quiet Room’ and ‘Music for Prague’.
In 1995, he collaborated with various artists, like Luciano Pavarotti, members of the U2 band and so on to form the group, ‘Passengers’. The group came up with their debut album, ‘Original Soundtracks 1’. The album was much appreciated and peaked at No. 76 on the US Billboard charts and No. 12 in the UK charts. The style of the album was in sync with his ambient and atmospheric sounds.
In 2004, he recorded yet another album with Robert Fripp titled, ‘The Equatorial Stars’. The following year, he came up with a solo venture title, ‘Another day oin Earth’ which was followed by ‘Everythign That Happens Will Happen Today’.
In 2006, he collaborated with David Byre to come up with the re-issue of the album, ‘My Life in the Bush of Ghosts’. The re-issue was in celebration of the album's 25th anniversary.
Same year, he released 77 Million Paintings, which was a program generative video that enabled viewers to see different combinations of video slides each time the program was launched
Continue Reading Below
The following year, his music was featured in the movie adaptation of Irving Welsh’s best-selling collection, ‘Ecstasy: Three Tales of Chemical Romance’. He also made contribution in Dido’s third album, Safe Trip Home for the composition ‘Grafton Street’. In 2009, he gave the music score for Peter Jackson's film adaptation ‘The Lovely Bones’.
In 2010, he released a solo album on Warp Records titled ‘Small Craft on a Milk Sea’, which was made in collaboration with Leo Abrahams and Jon Hopkins. The album included five compositions which were adapted from the tracks of ‘The Lovely Bones’.
In 2012, he released a 76-minute composition in four sections.
Other than being a musician, he has served as a producer as well and produced a number of albums including, ‘Talking Heads’, ‘U2’, ‘Devo’, ‘Ultravox’ and ‘James’. He also produced part of the 1993 Jane Siberry album ‘When I Was a Boy’. 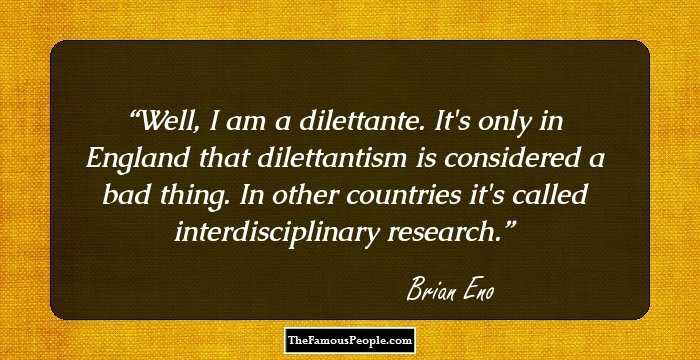 Quotes: I
Personal Life & Legacy
He is an Evangelical Atheist
Musical career apart, he supports the Long Now Foundation which focuses on educating people about the long-term future of the society. Additionally, he also serves as the columnist for British newspaper The Observer.
Trivia
He is composer of the six second start up music sound of Windows 95 operating system, The Microsoft Sound. 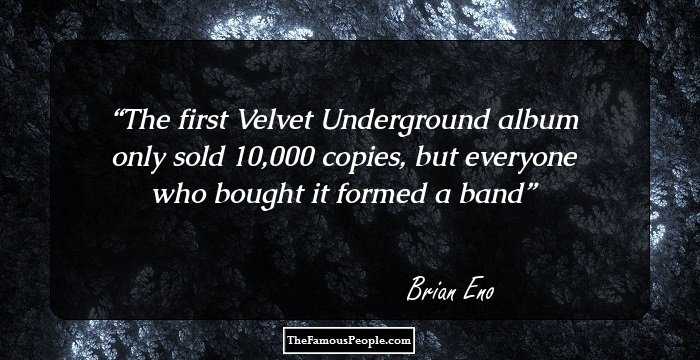 See the events in life of Brian Eno in Chronological Order