John Rawls was one of the leading American philosophers who specialised in moral and political philosophy. He was the author of ‘A Theory of Justice', which is still considered to be one of the most important publications in political philosophy. He was awarded the Schock Prize for Logic and Philosophy and the National Humanities Medal. Apart from his career in philosophy, Rawls also served in the United States Army during the World War II, serving in the Pacific, New Guinea, Philippines and Japan. However, he quit the same after witnessing the Hiroshima bombing. Upon leaving the army, he continued his education and went on to obtain his Ph.D. from the Princeton University. He later taught at the Harvard University, where he remained for around 40 years. American Celebrities
American Men
Princeton University
Male Philosophers
American Philosophers
Childhood & Early Life
John Rawls was born in Baltimore, Maryland, to William Lee Rawls, an attorney and Anna Abell Stump Rawls. He suffered from an emotional turmoil early on, when two of his brothers died in childhood due to fatal illnesses.
He briefly attended a school in Baltimore after which he enrolled at the Kent School in Connecticut. In 1939, he enrolled at the Princeton University.
In 1943, soon after obtaining a degree in arts, he was commissioned into the United States Army. He served during the World War II but left the army, after witnessing the Hiroshima bombing.
Withdrawing his service from the army, he got enrolled again at the Princeton University in 1946, to secure a PhD in the field of moral philosophy.
In 1950, he published the thesis titled, ‘A Study in the Grounds of Ethical Knowledge: Considered with Reference to Judgments on the Moral Worth of Character’.
Upon obtaining a PhD in 1950, he started teaching at the Princeton University - a position he held onto for two years. 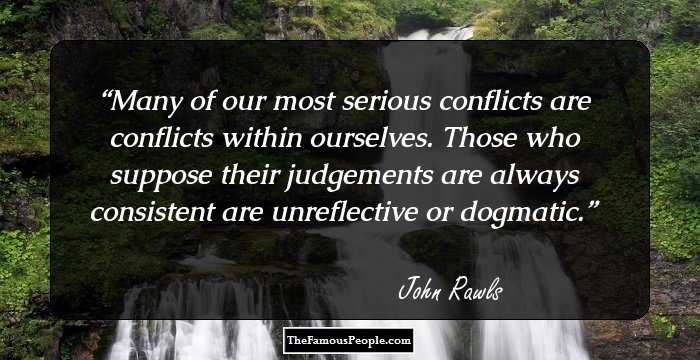 Famous Beautiful Women With Green Eyes
Career
In 1951, he published 'Outline of a Decision Procedure for Ethics', in the Cornell University journal titled, ‘Philosophical Review'. In the same journal, he also wrote, ‘Justice as Fairness' and 'The Sense of Justice'.
In 1952, he was awarded the Fulbright Fellowship to Oxford University. He returned to the United States of America, where he initially worked as an assistant professor and later became the associate professor at the Cornell University.
By 1962, he became a full time professor at Cornell University and soon received a tenured position from the Massachusetts Institute of Technology. However, he opted to teach at the Harvard University.
In 1963, he authored a chapter titled, ‘Constitutional Liberty and the Concept of Justice' for the book, ‘Nomos, VI: Justice', Yearbook of the American Society for Political and Legal Philosophy.
In 1967, he authored the chapter titled, ‘Distributive Justice’ in the Peter Laslett and W. G. Runciman book titled, 'Philosophy, Politics, and Society'. The following year, he wrote the article, ‘Distributive Justice: Some Addenda'.
In 1971, he authored ‘A Theory of Justice’, which was published by the Belknap Press of Harvard University Press. This is regarded as one of his most important works on political philosophy and ethics.
In November 1974, he wrote the article titled, ‘Reply to Alexander and Musgrave' in the 'Quarterly Journal of Economics'. The same year, he also published 'Some Reasons for the Maximin Criterion' in the 'American Economic Review'.
In 1993, he came out with an updated version of ‘A Theory of Justice’ titled'Political Liberalism'. The work was published by the Columbia University Press. The same year, he authored the article titled, ‘The Law of Peoples', which was published in the 'Critical Inquiry'.
In 2001, he published ‘Justice as Fairness: A Restatement', in response to criticism of his book, ‘A Theory of Justice’. The book presented a shorter summary of the philosophies that was edited by Erin Kelly.
Continue Reading Below 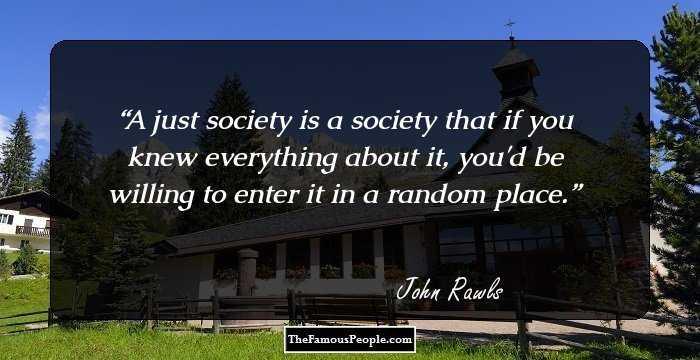 Major Works
‘A Theory of Justice’ is one of his seminal works and magnum opus that was widely hailed during its time of publication as ‘'the most important work in moral philosophy since the end of World War II'.
Awards & Achievements
In 1999, he received the Schock Prize for his work in 'Logic and Philosophy'.
In 1999, he was the recipient of the National Humanities Medal. 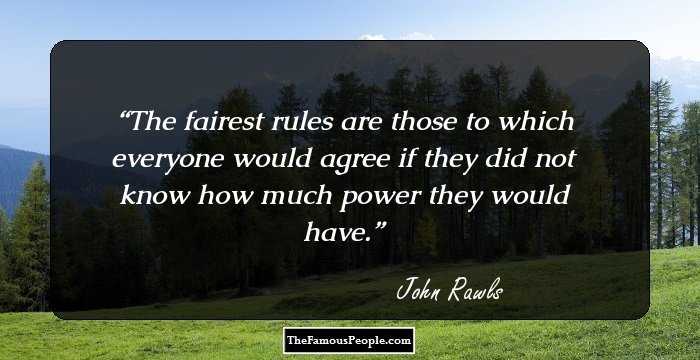 Personal Life & Legacy
In 1928, when he was barely seven years old, he suffered from diphtheria. The next year, he was struck with pneumonia.
In 1949, he married Brown University graduate, Margaret Fox.
This famous American political philosopher did not like giving interviews and was not comfortable with limelight.
He was an atheist.
In 1995, he suffered from a series of strokes, after which he could no longer work.
He died at the age of 81 in Lexington, Massachusetts.
Trivia
He was a leading American philosopher in moral and political philosophy whose work in political philosophy is dubbed as Rawlsianism.
You May Like

See the events in life of John Rawls in Chronological Order