John Maynard Keynes was the most influential British economist of the 20th century whose ideas fundamentally changed the practice of macroeconomics and the economic policies of the world. He is regarded as the founder of macroeconomics. He introduced Keynesian principles to the world that created a revolution in economic thinking with its unconventional approach. It challenged neoclassical economics and brought to the forefront the importance of state intervention to moderate the economic activity of the country and control the ‘boom’ and ‘bust’ phases. His 1936 book ‘The General Theory of Unemployment, Interest and Money’ was path-breaking in terms of content. Through his book, he argued that full employment could be maintained only with the help of government spending and that it could not always be reached by making wages sufficiently low. He believed that unemployment is basically caused if people don’t spend enough money. Lower spending results in demand falling further and a vicious circle commences which leads to job losses and a further fall in spending. Keynes’ solution to the problem was that governments should borrow money and boost demand by pushing the money into the economy. Once the economy has recovered and is expanding, governments should pay back the loans. Keynes was also responsible for the foundation of the International Monetary Fund (IMF) and World Bank (WB). Till date, he is best remembered as one of the world’s most influential economists of all time. Image Credit
The School of Life/youtube.com Image Credit
The School of Life/youtube.com
Previous   Next

British Celebrities
Non-Fiction Writers
British Men
Tall Celebrities
Tall Male Celebrities
Childhood & Early Life
John Maynard Keynes was born on June 5, 1883 in Cambridge to economist father John Neville Keynes and social reformer mother Florence Ada Keynes. He had two younger siblings.
Keynes started his education at the age of five and a half. However frail health led him to be tutored at home. He entered St Faith's Preparatory School in 1892. Academically bright, he gained a scholarship that earned him a place at Eton College in 1897. It was at Eton that he developed his love for mathematics, classics and history.
He won yet another scholarship in 1902 which led him to move to King’s College, Cambridge. While at Cambridge, economist Alfred Marshall implored him to study economics but in vain as Keynes became interested in philosophy instead.
In 1904, Keynes graduated with a Bachelor’s degree in Mathematics. Thereafter, he spent two years at the university campus, taking part in debates, studying philosophy and informally attending economics lectures as a graduate student for a term. This marked his only formal education in economics. In 1905, Keynes studied for Tripos and in the following year took civil service exams. 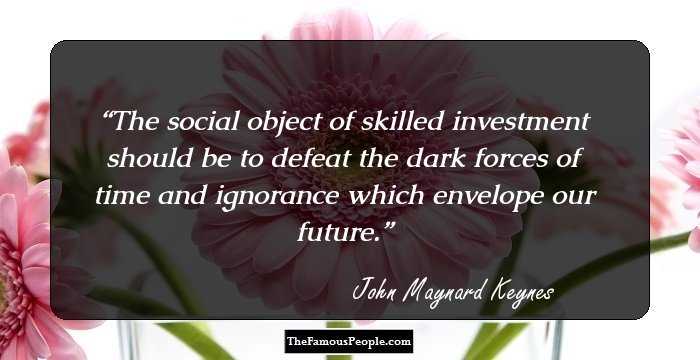 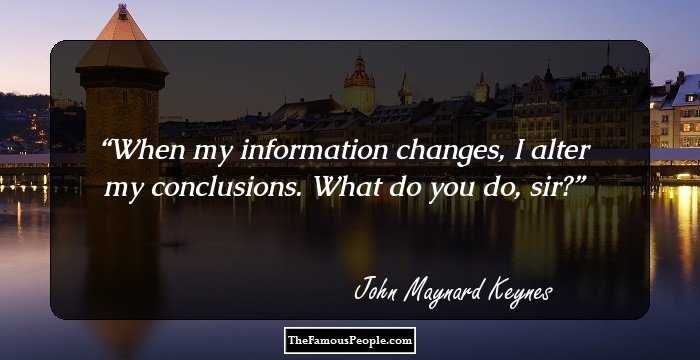 Quotes: You, I
Major Works
John Maynard Keynes’ most prominent work came in 1936 with his book ‘The General Theory of Employment, Interest and Money’. The book became a benchmark for future economic thought and laid the foundation for Keynesian principles that have sustained till date. Through the book, Keynes created a revolution in economic thinking by bringing to foray the importance of budget deficit.
Awards & Achievements
In 1917, on the King's Birthday Honours, John Maynard Keynes was appointed Companion of the Order of the Bath for his wartime work.
In June 1942, he was rewarded with a hereditary peerage in the King's Birthday Honours for his services. On July 7 the same year, he was gazetted as ‘Baron Keynes of Tilton, in the County of Sussex. 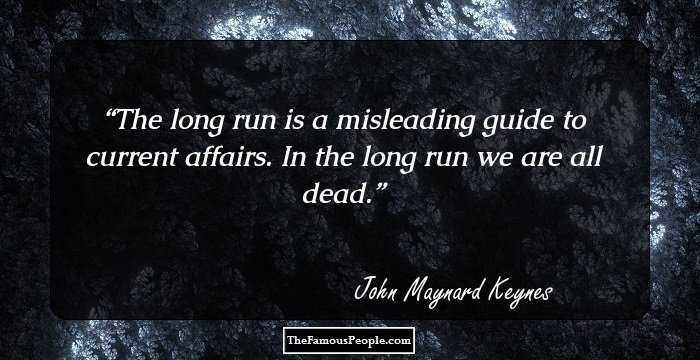 Personal Life & Legacy
John Maynard Keynes entered into a romantic relationship with Lydia Lopokova, a well-known Russian ballerina and one of the stars of Sergei Diaghilev's ‘Ballets Russes’ in 1921. The two married in 1925.
Keynes was a bisexual and had an affair with Duncan Grant in his early years. Grant served as his best man at the wedding. Keynes and Lopokova had no children.
He suffered from bad health towards the end of his career. While negotiating for the Anglo-American loan in Savannah, Georgia, in pursuit of favourable terms for UK, he suffered from a series of heart attacks. On returning to England, he suffered from yet another heart attack on April 21, 1946, which caused his death. He was aged 62.
In his lifetime and afterwards, Keynes has been referred to as one of the most influential economists of the 20th century. In 1999, to mark his legacy, ‘TIME’ magazine listed him on the ‘Most Important People of the Century’ list. Britain’s paper, ‘The Economist’ described him as the ‘Britain’s Most Famous 20th Century Economist.
Recommended Lists:
Intellectuals & Academics #36