A 'Nobel Prize' winner who was immortalized by the critically-acclaimed movie, 'A Beautiful Mind', Professor John Nash developed an interest in mathematics from the time he was in high school. Having graduated from esteemed educational establishments like the 'Carnegie Institute of Technology' and the 'Princeton University', he revolutionised the field of equilibrium theory. He is famous for his works on 'Game Theory', partial differential equations, and algebraic geometry. Not only is this mathematician's work important in his field of study, but is also used in a wide range of subjects like artificial intelligence, politics, economics, accounting, and even biology. Application of his 'Game Theory' is essential for arriving at decisions that benefit an organization and its people. Since the establishment of the validity of this field of study, eleven game theorists have been awarded the 'Nobel Prize'. Though glorified by his biographer, Sylvia Nasar, and Hollywood, his life has been controversial, where he has been charged with indecent conduct, and has allegedly not been a very able husband and father. However, it is this talented mathematician’s fight against schizophrenia and the stigma associated with the condition, which has made him the epitome of brilliance according to many, across the world Herbert A. Haup...
DID WE MISS SOMEONE?
CLICK HERE AND TELL US
WE'LL MAKE SURE
THEY'RE HERE A.S.A.P
Quick Facts

American Celebrities
Mathematicians
American Men
Princeton University
Carnegie Mellon University
Childhood & Early Life
John Forbes Nash Jr. was born to an electrical engineer having the same name, and his wife, Margaret Virginia Martin, a former school teacher, in the town of Bluefield, West Virginia, on June 13, 1928. The young boy had a younger sibling, Martha, who was born approximately two and a half years later.
On completing high school, John went on to pursue a course in chemical engineering from the 'Carnegie Institute of Technology', presently known as the 'Carnegie Mellon University'. Here, he changed courses to chemistry and subsequently earned both a B.S. and an M.S. in mathematics in 1948, due to his academic brilliance.
He earned a 'John S. Kennedy scholarship' to the prestigious 'Princeton University', where he specialised in the equilibrium theory in mathematics. In 1950, the young man was able to graduate with a doctorate degree for his research on 'non-cooperative games'.
During this time, he published dissertation papers like 'Equilibrium Points in N-person Games', 'The Bargaining Problem', and 'Non-cooperative Games’. 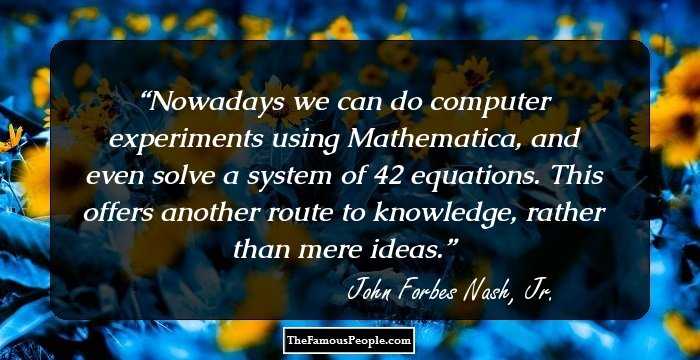 Continue Reading Below
Career
Around the same time, he was hired as a consultant by the ‘RAND Corporation’, where he conducted major research studies on ‘Game Theory’. In 1951, Nash began working for the ‘Massachusetts Institute of Technology’ (‘MIT’) as a temporary mathematics teacher.
In 1952, he published his work on other areas of mathematics, in the paper, 'Real algebraic manifolds'. The following year, the thesis paper, 'Two-person Cooperative Games', based on his research conducted at ‘Princeton University’ was also published.
While working on a problem related to German mathematician David Hilbert's 'elliptic partial differential equations', John got acquainted with Italian, Ennio de Giorgi in 1956. Both Nash and Giorgi formulated the proof for the equation, a few months away from each other, and thus both missed out on the 'Fields Medal'.
In 1958, he began working as a lecturer on a probationary term, at the 'MIT'. By the following year, his work started getting hampered owing to symptoms of mental illness, which became quite evident after his incoherent speech at the 'American Mathematical Society' of 'Columbia University'.
In 1959, the brilliant mathematician was forced to resign from his post at the ‘Massachusetts Institute of Technology’, and was sent to the ‘McLean Hospital’, to get treatment for suspected schizophrenia.
After a long period of hospitalization, Nash was able to continue work since 1970, the year he refused to be treated any further for his schizophrenia. Within the next ten years, he overcame his regular hallucinations, and was able to concentrate completely on academic research.
Towards the end of his career, he worked at the 'Princeton University', as a Senior Research Mathematician. In 2005, he delivered a speech at the 'Warwick Economics Summit', hosted by the 'University of Warwick'.
In 2006, he also attended a conference at Cologne, one of Germany's largest cities, where he spoke about strategic decision making using his 'Game Theory'. In recent times, Nash had conducted extensive studies in the field of game theory and partial differential equations. 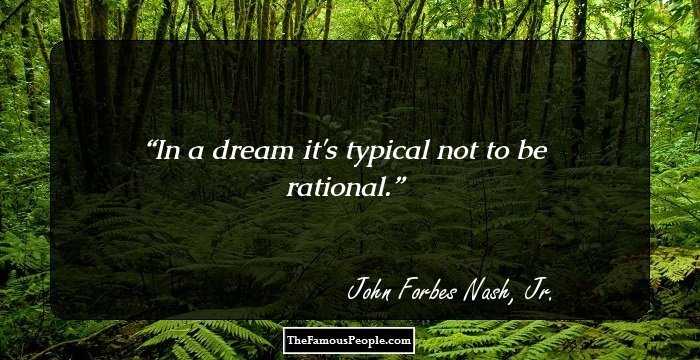 Continue Reading Below
Major Works
Amongst all mathematical research conducted by this genius, the one that brought him fame, and the ‘Nobel Prize’, is his work on ‘Game Theory’. The ‘Game Theory’ has become a significant area of study in the field of economics, and it describes how participants of a game take decisions individually or collectively to arrive at a win-win situation.
Awards & Achievements
This ingenious mathematician was felicitated with the 1978 'John von Neumann Theory Prize', for pioneering the 'non-cooperative equilibrium', which has now been named after him, as the 'Nash equilibrium'.
In 1994, this accomplished mathematician received the 'Nobel Prize', in the field of 'Economic Sciences', for his work on 'Game Theory'. He shared the award with German Economist, Reinhard Selten, and Hungarian-American scholar, John Harsanyi.
The 'Leroy P. Steele Prize' was awarded to John in the year 1999, for his invaluable contribution to the field of mathematics.
In 2010, he received the 'Double Helix Medal' by the 'Cold Spring Harbor Laboratory', for his fight against schizophrenia.
On May 19, 2015, Norway's King Herald V honoured John and fellow mathematician, Louis Nirenberg, with the 'Abel Prize', for their research on 'nonlinear partial differential equations'.
He has also received several honorary doctorates and degrees from esteemed institutions like the 'Carnegie Mellon University', 'University of Antwerp', University of Naples Federico II'. 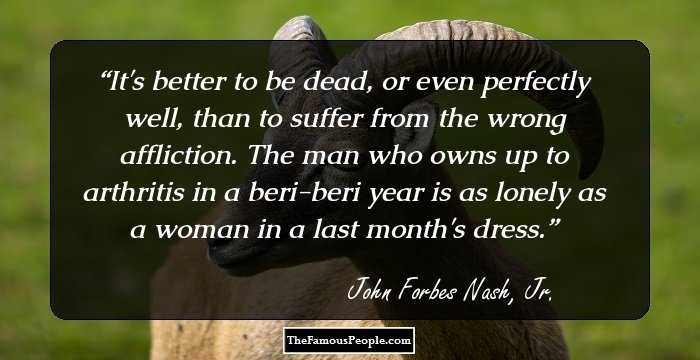 Personal Life & Legacy
In 1952, John Nash was in a relationship with a nurse named Eleanor Stier. However, when Eleanor got pregnant with the young mathematician's son, John David Stier, she was left to fend for herself.
Continue Reading Below
Two years later, he was arrested in California, for his homosexual encounters in a public toilet. He was released from prison soon, but the exceptional mathematician lost his job at the 'RAND Corporation'.
In February 1957, Nash got married to a physics graduate from 'MIT', Alicia Lopez-Harrison de Lardé, according to Roman Catholic customs and the couple had a son, John Charles Martin.
Soon John started developing symptoms of mental illness, and authorities at the ‘McLean Hospital’ diagnosed him with schizophrenia. Nash was later institutionalized at the 'New Jersey State Hospital', and from then on was treated regularly for the disease.
In 1963, Nash and Alicia separated owing to the degenerative nature of the mathematician’s disease. It was only after seven years that he finally refused to take further treatment, and was out of hospitals.
The 1998 biography of this great mathematician, 'A Beautiful Mind' was penned by Sylvia Nasar.
Three years later, the book became the basis for filmmaker Ron Howard's movie, having the same title. The movie, 'A Beautiful Mind' starred American actor Russell Crowe as Nash, and won several accolades, including the 'Academy Award for Best Picture'.
In 2001, Alicia and John remarried, and were together for the next fourteen years.
The ‘Nobel Prize’ winner and his wife died on May 23, 2015, at the ‘New Jersey Turnpike’, in a car accident, when the driver of the cab they were in, lost control and the passengers landed outside the car.
Trivia
This American mathematician had a choice between ‘Harvard University’, and the ‘Princeton University’, to pursue his higher education, but he chose the latter because they offered him a scholarship. This proved to this man that the ‘Princeton University’ thought he had potential, and valued him more.

See the events in life of John Forbes Nash Jr. in Chronological Order