A New England religious liberal and Puritan spiritual advisor, Anne Hutchinson (born Anne Marbury) was one of the most prominent participants in the Antinomian Controversy of the Massachusetts Bay Colony. She was a follower of John Cotton and followed his spirit centred theology. She believed that salvation was granted to God’s elects and could not be achieved through human efforts and penitence. In the weekly discussions and meetings held at her home, she freely talked about these matters and soon the number of her followers grew. She put more emphasis on the efficacy of faith as a way to attain redemption. Hutchinson criticized the New England Puritan ministers for their narrow concepts of morality. Her principles were at odds with those of the recognized Puritan clergy of Boston. The civil authorities of Boston felt threatened by her theological beliefs as well. So she was tried by the General Court for alleged defaming of ministers. After her trial before the Boston Church, she was officially excommunicated. Following this, she and other dissenters established a settlement on the island of Aquidneck. Later in her life, she lived in the Long Island Sound. In 1643, she, her other family members and servants were killed in an attack. American People
American Women
American Nurses
Female Preachers
American Preachers
Childhood & Early Life
Anne Hutchinson was born at Alfred in Linconshire, England, in the family of Francis Marbury and Bridget Dryden. She was baptised on 20th July, 1591.
She was born of her father’s second marriage and was the third of her parents’ fifteen children.
Anne Hutchison’s family stayed at her birthplace for the first 15 years of her life. She received education at home, from her father.
On 9th August, 1612, at the age of 21,she married William Hutchinson, a fabric merchant. The ceremony took place at St Mary Woolnoth Church in London. 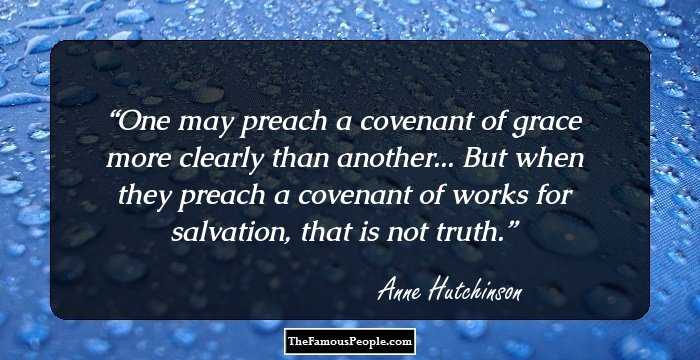 Who Is The Greatest Female Warrior In History?
Later Life
Anne Hutchinson became deeply influenced by the preachings of John Cotton, a minister at Boston whose doctrine emphasized on ‘absolute grace’. Her husband’s brother-in-law John wheelwright too preached similarly. Inspired by their beliefs, Hutchinson began holding biweekly meetings at her place, where she talked about her own radical interpretations of the Bible.
In 1633, when John Cotton had to flee to New England, Hutchinson and her family followed him, a year later.
At Boston, they started staying at the Shawmut peninsula where Anne took up the role of a midwife. While assisting women in their childbirth, she also gave them spiritual advice.
Very soon, she started hosting meetings for conventicles at home and every week, over 60 people, both male and female, came in her place to discuss Cotton’s preachings. In these meetings, Hutchinson putforth her own viewpoint that through ‘an intuition of the spirit’ can one hope for salvation. Governor Vane was a frequent participant in these meetings too.
Her unorthodox sermons and preaching stirred the Puritan church and they accused her and her followers of Antinomianism which means practicing something which is opposed to the law of grace.
In 1637, when Henry Vane was replaced by Governor John Winthrop, the orthodox party decided to deal with the rivals. On 7th November 1637, Hutchison was put on trial on the charge of maligning the Puritan ministers and endorsing disturbing opinions. Winthrop presided over the trial.
Hutchinson was banished by the court and condemned as a ‘a woman not fit for our society’. At the end of the trial, Hutchison was put under house arrest. She stayed at the house of Joseph Weld, in Roxbury.
On 15th March 1638, Hutchinson went through the church trial, in the home church in Boston. The chief prosecutor for this trial was Reverend John Davenport.
After a gruesome investigation, which lasted for a week, on 22nd March, she read out her recantation to the parishioners where she admitted to being wrong in her beliefs and behavior towards the Puritan orthodox religion.
Continue Reading Below
In spite of her recantation, Anne Hutchison was banished from the colony and excommunicated from the church along with her supporters.
She settled with her family and followers on the Aquidneck Island (now known as Rhode island).
However, because of the threats posed by the Masachusetts Bay colony, Hutchison and the settlers had to move to Connecticut and then in 1642, they settled down at Split Rock, New Netherland.
But the settlers soon became the victims of the local turbulence. During the Kieft’s war, the natives of the place attacked the New Netherland colony. The exact date of the massacre is unknown, though it must have been in August 1643.
The Siwanoy chief Wampage killed Hutchinson along with her children and servants. Only one of her daughters survived. This incident was viewed by some people of the Massachussets as divine judgment.
Personal Life & Legacy
She got married to William Hutchinson, a fabric merchant, in 1612. The ceremony took place at St Mary Woolnoth Church in London.
Anne bore 15 children. Eleven of them survived to sail to New England and only the youngest daughter, Susanna survived the attack of the Indians.
Trivia
Anne Hutchison was the inspiration behind the fictional character of Hester Prynne in Nathaniel Hawthorne’s famous novel ‘The Scarlet Letter’.
She has been depicted in William Gibson’s play, ‘Goodly Creatures’ while Dan Shore’s opera ‘Anne Hutchinson’ was performed twice in Boston, Massachusetts by the Intermezzo Opera Company in 2014.
Among the many descendants of Hutchison, the most notable are the US presidents Franklin Roosevelt, George H. W. Bush, the US politicians like Mitt Romney, Stephen A.Douglas, chief justice of the US supreme court, Melville Weston Fuller.
One statue of Hutchison stands in front of the State House in Boston while another stands at the corner of Beale St and Grandview Avenue in Quincy, Massachusetts.
Recommended Lists:
Miscellaneous #3702
You May Like

See the events in life of Anne Hutchinson in Chronological Order