Advanced Search
Calvin Coolidge was a Republican politician who served as the 30th President of the United States. A professional lawyer, he had entered politics as a city councilman in Northampton, Massachusetts. Over the years he rose through the ranks in the Massachusetts state politics, proceeding to serve as the senator and lieutenant governor before eventually becoming governor of Massachusetts. In this position he attracted national attention with the manner in which he managed a crisis involving Boston policemen who went on strike. He took decisive action at the time, calling out the state guard to quell the violence that had erupted as a result of the Boston Police Strike. His calm demeanor and the ability to take strong action in a timely manner earned him the respect of Republicans throughout the nation. The Republicans chose Coolidge as the vice presidential candidate to run along with the presidential candidate Warren Harding in 1920. The duo won and Coolidge assumed his duties as the vice president in March 1921. President Harding died suddenly in 1923 and Coolidge assumed the presidency amid the chaos that followed Harding’s death. Calm and composed, Coolidge proved to be an efficient president in spite of taking over the office in a period of turmoil and was easily elected as the President in his own right in 1924. American Celebrities
American Men
Amherst College
Male Leaders
Cancer Leaders
Childhood & Early Life
John Calvin Coolidge Jr. was born on July 4, 1872, in Vermont to John Calvin Coolidge Sr. and Victoria Josephine Moor. He had one younger sister. His father worked as a farmer and storekeeper, and also served in the Vermont House of Representatives and the Vermont Senate.
His early life was marked by two major tragedies—the death of his mother when he was 12, and the death of his only sister when he was 18. His father later remarried and lived a long life.
His father was a very hard working and honest man who instilled the same values in his son. John grew up to be a principled young man of strong character under his father’s guidance.
He received his schooling from Black River Academy and joined the Amherst College from where he graduated cum laude.
He then moved to Massachusetts and apprenticed with a local law firm, Hammond & Field, and also read law with the partners, John C. Hammond and Henry P. Field. Hammond and Field were active in local Republican politics and Coolidge followed suit. Coolidge was admitted to the bar in 1897. 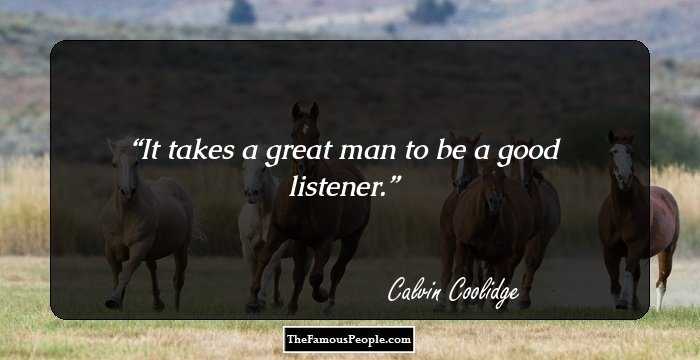 Continue Reading Below
Career
In 1898, Calvin Coolidge opened his own law office in Northampton. He practiced commercial law and soon gained a reputation as a hard working and honest attorney. The same year, he won election to the City Council of Northampton.
He ran for City Solicitor in 1899 and was elected for a one-year term in 1900. He was reelected in 1901. He returned to private practice in 1902 after a Democrat succeeded him as the City Solicitor.
In 1909 Coolidge was elected mayor of Northampton. He successfully ran for the state senate and was elected the senator of the Massachusetts state government in 1911, serving till 1915.
He went on to serve as the lieutenant governor (1915–18) and was elected governor in 1918. A major crisis in the form of the Boston Police Strike erupted in 1919, and being the governor, Coolidge took some strong action to quell the violence. His timely action, and the way he faced the challenges posed by this crisis earned him the respect of the citizens from all over the nation and he became a very popular Republican.
In 1920, the Republicans selected Senator Warren G. Harding of Ohio as their nominee for President and Coolidge as his vice presidential running mate. Harding and Coolidge won in a landslide, winning more than 60 percent of the popular vote and were sworn in as the President and Vice president respectively on March 4, 1921.
As the Vice President, Coolidge became the first one to attend cabinet meetings. He also gave public speeches and performed other official duties. He was a man of few words and earned the nickname “Silent Cal” because of his taciturn nature.
President Harding died suddenly on August 2, 1923, while on a speaking tour. Coolidge was visiting his hometown Vermont at that time. He immediately took the oath of office from his father, a notary public, by the light of a kerosene lamp at 2:47 am on August 3 at the family home in Plymouth, Vermont.
Coolidge returned to Washington the very next day and again took the presidential oath of office in the presence of Justice Adolph A. Hoehling Jr. of the Supreme Court of the District of Columbia.
Warren Harding’s administration had been mired in scandals, and Coolidge assumed office at a time when American politics was in great turmoil. Known to be man of great moral character, Coolidge quietly set upon restoring the faith of the common man in presidency again.
Continue Reading Below
Coolidge was easily nominated for the Republican ticket at the 1924 presidential election. He won the election and was elected to a full term.
During his administration, the nation experienced rapid economic growth. The 1920s was dubbed the “Roaring Twenties”, a period marked by unprecedented industrial growth, large-scale use of automobiles, telephones, motion pictures, and electricity. During this period, the United States gained dominance in world finance.
He was a popular president and was expected to win the 1928 presidential election had he chosen to stand for reelection. Coolidge, however, decided to step down in 1929 and was succeeded by Herbert Hoover. 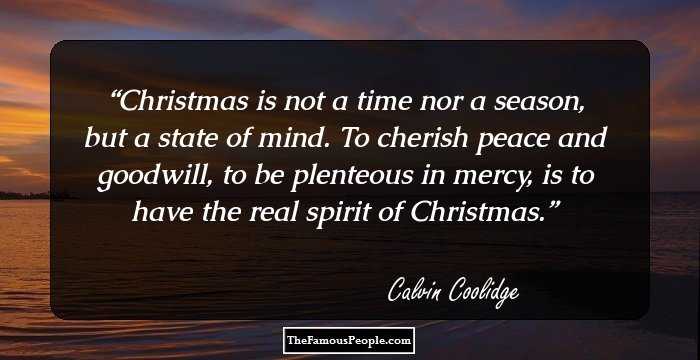 Quotes: Time, Peace
Personal Life & Legacy
Calvin Coolidge married Grace Anna Goodhue in 1905. Grace was a University of Vermont graduate and teacher at the Clarke School for the Deaf. His wife was as vivacious and sociable as he was reserved and taciturn. The couple had a happy marriage that produced two sons. The couple suffered a terrible tragedy when one of their sons died as a teenager.
Coolidge died suddenly from coronary thrombosis on January 5, 1933.
Trivia
Calvin Coolidge’s second inauguration as the president in 1925 was the first time an inauguration was broadcast nationally on radio.
This American President was the only one to have his portrait on a coin during his lifetime. 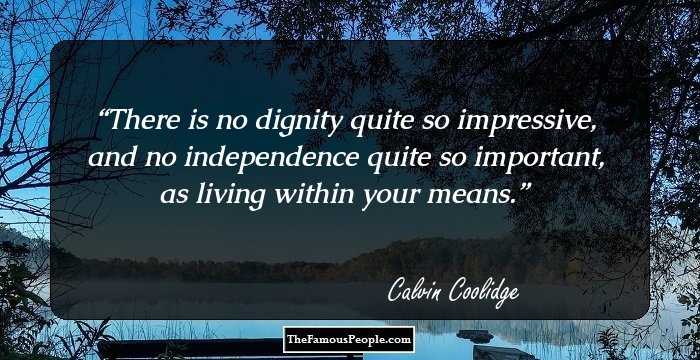 Quotes By Calvin Coolidge | Quote Of The Day | Top 100 Quotes

See the events in life of Calvin Coolidge in Chronological Order