Advanced Search
Jeremy Meeks, also known as “Hot Felon,” is an American model, who has been a member of the southern California gang ‘Crips’ and a convicted felon in the past. Born into a family with a criminal history, including heinous acts such as murder and rape by his father and petty crimes by his mother, sister, and brother, Meeks plunged into the world of crime in his early teenage years. Having been involved in gang violence, theft, and possession of firearms, he spent almost 10 and a half years of his early life going in and out of prison. However, in 2014, a mugshot clicked after he was convicted for theft and illegal possession of weapons went viral on the internet and transformed his life. He took advantage of the situation and reformed his lifestyle. With the support of his family, a sympathetic judge in the court, his countless fans, and Jim Jordan, an influential name in the business of fashion, he reformed his life and career. He has endorsed many well-known brands such as 'Philipp Plein' and 'Tommy Hilfiger.' He is currently one of the most sought-after models in the fashion industry. American People
Black Fashion
American Men
Tall Celebrities
Tall Male Celebrities
Childhood & Early Life
Jeremy Ray Meeks was born on February 7, 1984, in Tacoma, a city in Pierce County, Washington, United States of America.
Both his parents, Katherine Angier and Raymond Meeks, were heroin addicts. He once described himself as a “heroin baby.”
He grew up with two sisters, Leanna and Carmella, and a brother, Emery.
When he was 9 months old, his father murdered a young woman by stabbing her 36 times and then strangling her. He had also raped another woman. In 1984, he was imprisoned and sentenced to 45 years in prison.
His mother, too, has a history of crime and has been in and out of prison several times.
When he was in sixth grade, he left Washington and moved to Los Angeles, California, United States of America.
His childhood was mostly troubled, as he had a dysfunctional family. His elder sister raised him since he was 12 years old.
Continue Reading Below
Criminal Life
At the age of 15, Meeks left his house. Soon, he was exposed to the local gangs and got involved in many street fights. He was arrested and sent to juvenile hall.
Shortly after he was released, he was shot five times and beaten with baseball bats by gang members.
Meeks was arrested for many other crimes. He later revealed that he had spent around 10 and a half years in prison.
Being a person of mixed race and light skin tone, he was ill-treated in prison. This happened because he was neither white enough nor black enough to mingle with his fellow prisoners.
Due to his good looks, he often became an easy target in prison.
He was arrested (and later convicted) for a high-profile theft and illegal possession of firearms in 2014. His mugshot, clicked on June 18, 2014, became viral on the internet and turned his life around.
His charming looks captured in the picture moved the hearts of netizens, and they began sympathizing with him. Some went a step further by showing generosity toward him.
His bail amount was raised to £780,000. Following this, his mother decided to raise the bail amount by crowdfunding and set up a ‘GoFundMe’ page.
It is claimed that he received around 300 letters daily. He also received money hidden inside books while incarcerated at the 'Mendota Federal Correctional Institution,' California.
Continue Reading Below
The adjudicating judge took a sympathetic stand and reduced Meeks’s sentence from 63 months to 27 months, so that Meeks could put his newfound fame to good use.
Meeks later admitted that the judge's decision and support had helped him tide over the difficult time he was facing back then and turn his life around.
He was nicknamed “Hot Felon” by the press, while serving time in prison. During this time, he reformed his behavior and was hopeful of an early release.
He was released from prison in March 2016 and spent a few weeks in a transition house.
Transformed Life & Career
The judge's decision and support played a significant role in transforming Meeks's life and career. Following his release, he switched to a healthy lifestyle. He began following a healthy diet and a strict fitness routine. He also kept himself busy with constructive activities.
Soon, Jim Jordan, an influential name in the fashion and modeling industry, discovered Meeks. Jordan's talent management company, 'White Cross Management,' offered Meeks a modeling contract in early 2015, when he was still in prison.
In February 2017, he modeled for 'Philipp Plein' and also walked the ramp for the first time at the 'New York Fashion Week.'
Followjng this, he was named the “Buff Bad Boy” by the fashion and style magazine 'Vogue.' Earlier, lifestyle magazine 'People' had dubbed him “Hot Convict” and “Hottie Thug.”
In August 2017, he worked in an ad campaign for the sunglasses brand 'Carolina Lemke.'
Continue Reading Below
He also presented the 2018 spring/summer sports collection of 'Phillip Plein' at the 'Milan Fashion Week.'
Later, he walked the ramp for brands such as 'Tommy Hilfiger,' for their spring 2018 collection.
In 2018, he was featured in the music video 'Wi-Fi' by Russian pop singer Olga Buzova.
Since mid-2019, he has been working on launching his fashion label. He has reportedly signed a contract with the German firm 'Fashion Concept GmbH.' The deal is said to be worth $15 million.
He was the first exit to showcase the fall 2020 collection of the streetwear brand 'Extremedy' at the 'Milan Fashion Week.'
He has also expressed interest in making music. Reportedly, he also has offers to star on reality TV shows.
Family & Personal Life
Meeks's sister Carmella and his brother, Emery, too, have criminal records.
Meeks married Melissa in 2008. He thus became a father to his stepson, Robert, Melissa’s son from her previous relationship. Meeks and Melissa also had a son of their own, Jeremy Jr.
It is reported that he met Chloe Green at Cannes, France, in May 2017. Chloe is the daughter of Sir Philip Green and the billionaire heiress to the 'Arcadia Group' that owns brands such as 'Topshop,' 'Topman,' and 'Evans.' The group was also associated with the now-defunct 'BHS’ chain.
After an image of Meeks and Chloe hugging and kissing each other surfaced in the media in July 2017, Meeks and Melissa separated.
Meeks and Melissa divorced in 2018. But by then, his relationship with Chloe had grown stronger.
Meeks and Chloe had a son, Jayden-Meeks Green, on May 29, 2018.
In August 2019, reports claimed that Meeks and Chloe had separated.
In early 2020, the media reported that he had been seen with an unknown woman more than once, giving rise to rumors that he might be in a new relationship.

See the events in life of Jeremy Meeks in Chronological Order 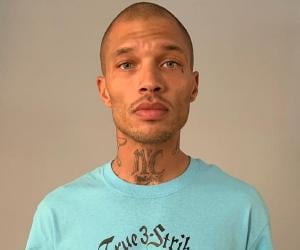